WORLD Cyclist who flipped off Trump running for local office

Cyclist who flipped off Trump running for local office 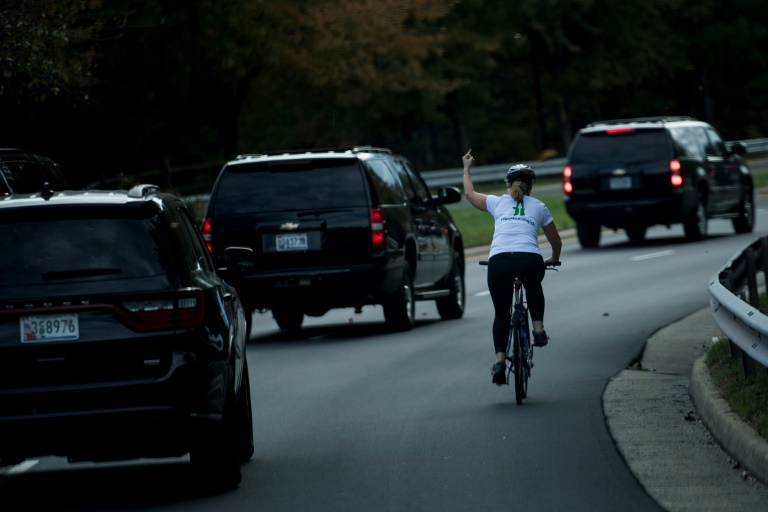 A viral photo taken in the fall of 2017 shows a cyclist flipping off Donald Trump's presidential convoy. The image cost Juli Briskman, the cyclist, her job.

Two years later, Briskman has jumped headfirst into politics and is running for local office.

Night has begun to fall in Loudoun County, Virginia, and the growing shadows on Kartar Khalsa's front porch make it difficult for him to recognize the friendly blonde woman going door to door, handing out leaflets ahead of the November 5 local elections.

"Oh, she's the one who flipped the president?" asked the turbaned yoga teacher, once the Democratic candidate had moved on to his neighbor's house.

"Yeah, I heard that story," Khalsa said. "I heard that she lost her job, then I heard eventually that she was running for office... That's good. I like that energy."

Trump "deserves it," he added, chuckling.

Aside from a small bicycle-shaped pin worn above her heart, Briskman rarely mentions "the incident," as she delicately calls it.

On that Saturday in October 2017, the 52-year-old athlete showed Donald Trump exactly what she thought of him, as his imposing convoy of black SUVs passed her on the road outside the Trump National Golf Club.

Immortalized in an AFP photograph, the snapshot quickly went viral. But the image also cost Briskman her job as a marketing analyst for a United States government and military subcontractor.

Briskman's gesture got a widely varied reception in a politically divided US. While some viewed her defiant finger as a sign of resistance, the photo also brought her insults and threats.

She also sued her former employer for unfair dismissal, accusing it of violating her freedom of speech.

But getting fired "did open a lot of doors in other ways," Briskman admitted, in her home in Sterling, where she keeps a binder full of press clippings, cartoons and traces of televised appearances related to the incident.

A single mother of two teens, Briskman quickly found a new job. Soon after, she was asked to run for county supervisor, a local office, on the Democratic ticket.

It didn't take long for her to decide. Political engagement felt obvious to her since she has been involved in her community for a long time.

"I did feel a little bit of responsibility, (because) I was handed a megaphone," she explained. "I can't run against Trump, but I can run for this seat and make a difference right here."

The marathon runner wanted to show that there was "substance" behind her candidacy -- education, women's rights, transportation and environmental issues -- and that she wasn't "just the person that rode my bike one day and flipped off the president."

While campaigning, she stuck to a tried-and-true strategy: when going door to door in Loudoun County, the wealthiest in the US, Briskman doesn't bring up the image that sparked her 15 minutes of fame.

She only mentions it when the homeowners "start talking about the administration" or comment on her bicycle pin.

On a windy autumn evening, amid Halloween decorations, no one seems to remember the buzz from two years ago. But for Mike Mullins, Briskman's campaign manager, her candidacy is very different from others he's seen.

"I've never worked on a local campaign like this where it is that easy to get media attention," he said.

"We have donations from Texas or Tennessee, a lot of support from people with sympathy for her story."

Briskman said she still receives threatening messages from anonymous "cowards," even two years after the incident. But when she goes door to door, she uses an app to help her target households more likely to vote Democratic and avoid unpleasant encounters.

It doesn't always work: one woman once told Briskman she would only vote for a candidate who openly supported Trump, and then asked if Briskman did.

"Not really," Briskman replied vaguely before politely excusing herself -- all while taking care not to show her famous pin.