BEIRA, Mozambique, March 24 (Xinhua) -- Mozambican authorities said on Sunday that the bodies of 446 victims killed in the disaster caused by Cyclone Idai have been found in the central region of the country. 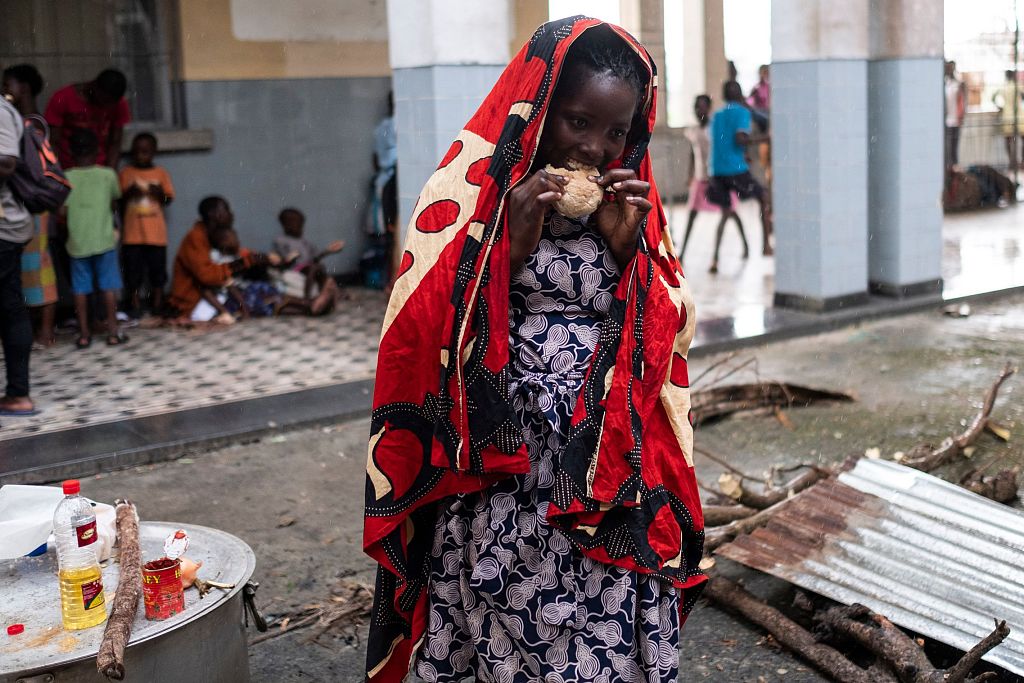 A woman with a scarf on her head to protect her from the rain, eats bread that has been given to displaced people at the Samora Machel High School in Beira, Mozambique, on March 23, 2019. (Photos: VCG)

"The number of deaths rose. Yesterday we had a number of 417 dead bodies, and today (the number) rose to 446 deaths," Minister of Land, Environment and Rural Development Celso Correia told reporters from the emergency operations center in Beira, coastal province of Sofala, where the cyclone made landfall.

Correia said it has become increasingly difficult to gauge the number of deaths in isolated areas.

The affected population also rose to 531,466, the minister said, emphasizing that they are people who have lost their homes or who are still stranded in isolated areas.

"Fortunately, the number of people saved and evacuated to the temporary shelters is increasing," Correia said. "At present we have counted 109,633 people in various shelters. Of these there are 6,563 vulnerable people, including elderly and pregnant women."

He said the number of students who cannot attend classes because schools were flooded and destroyed rose to 9,756.

Correia said that 45 health units were directly affected in the zones of impact by floods and by the passage of Cyclone Idai.

"The overarching priority in the coming weeks is to stem the outbreak of diseases such as cholera, malaria and other diseases," he said.

"The government has already started setting up centers to mitigate these diseases," Correia said.

He cited the resumption of operation on Saturday of national road Number 6 as an important victory that makes it easier for aid to reach recipients by land.

"Some areas already have road access. The flows of the rivers are reducing, allowing the government and rescue teams to facilitate stabilization in the affected areas," the minister said.

Cover image: Congregants pray outside during a service after their church was destroyed by Cyclone Idai, in Beira, Mozambique, March 24, 2019.