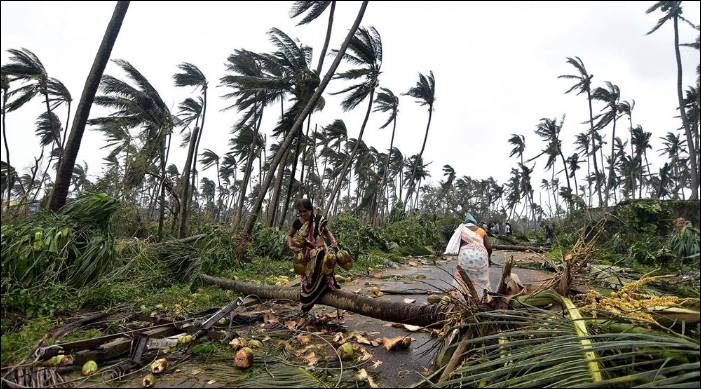 Strong gusts caused a storm surge with waters inundating low-lying areas in the eastern states of Odisha and Andhra Pradesh, and the winds, on par with a Category two hurricane, wreaked havoc on infrastructure, blocking roads and hampering emergency work.

"Five people died due to falling trees and a wall collapse," said Andhra Pradesh D. Varaprasad, Disaster Management Commissioner, adding drinking water shortages were a concern in many places due to electricity failure and generator outages.

Tropical cyclone "Titli", with gusts of up to 165 kilometers per hour (100 miles per hour), made landfall in the Srikakulam district of Andhra Pradesh early Thursday, according to the India Meteorological Department.

"We fear that 6,000 to 7,000 electricity poles may have been uprooted," said K. Dhananjaya Reddy, district administrative chief of Srikakulam.

Odisha's Special Relief Commissioner Bishnupada Sethi said so far there had been no reports of casualties in the state.

"There have been preparations at all levels within the state," said Sethi, adding that it had used social media to keep people informed.

"There have been a large number of WhatsApp groups working at different levels and they help," he said, adding the state also experimented with an early warning dissemination system, warning those near the coast through sirens and voice broadcasts.

"Television channels, along with radio stations, also helped to spread messages," he said.

Officials in Odisha evacuated over 300,000 people, suspended operations at the port of Paradip and cancelled many trains and flights on Wednesday.

The Odisha Chief Minister's office in a tweet on Wednesday said schools and colleges across the state would remain closed for the week.

"Operations at Paradip have been suspended and all ships have been shifted to deep sea," said Captain A.K. Mohapatra, Deputy Conservator of Paradip Port.

The Bay of Bengal often witnesses cyclones at this time of the year, with some causing widespread death and destruction. Odisha was hit last month by a low-intensity storm.