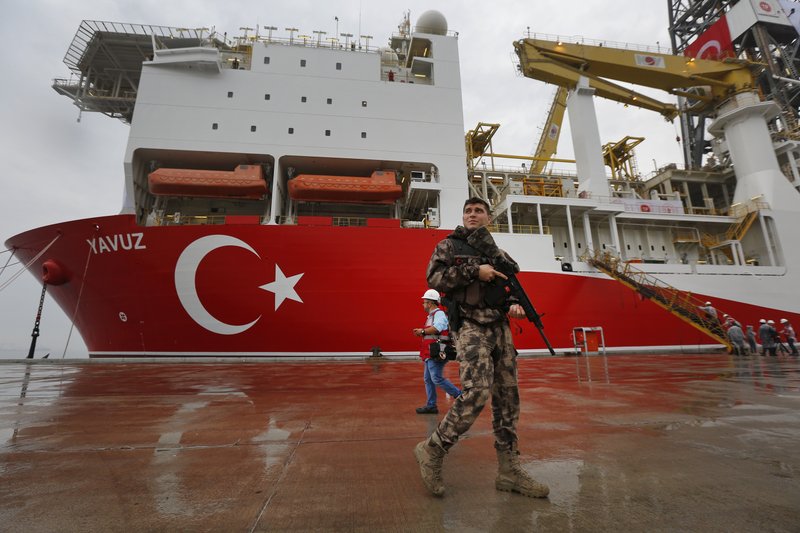 A Turkish police officer patrols the dock, backdropped by the drilling ship 'Yavuz' scheduled to be dispatched to the Mediterranean, at the port of Dilovasi, outside Istanbul, June 20, 2019. (Photo: AP)

NICOSIA (Xinhua) -- Cyprus on Monday strongly condemned Turkey's new plans to drill for natural gas off its southeast coast, calling it "a blatant violation of international law" in a statement issued by the office of the president.

Turkey said on Sunday that a drilling vessel called "Yavuz" and two supporting vessels accompanied by a military ship would begin drilling off the Karpasia peninsula later this week.

Unlike a drilling activity currently underway 36 nautical miles off the west coast of Cyprus, in a region claimed by Turkey as its own continental shelf, the new drilling is planned in an area "licensed" by the so-called "Turkish Republic of the Northern Cyprus," an entity recognized solely by Turkey.

The statement by the Cyprus President's office said "the second planned drilling ... constitutes an escalation of Turkey's continued violations of the sovereign rights of the Republic of Cyprus under the (United Nations) Convention on the Law of the Sea."

"Turkey continues to blatantly violate international law, both conventional as well as customary, flagrantly disregarding the European Union's and the international community's calls to cease its illegal activities and respect the sovereign rights of the Republic of Cyprus," it said.

The European Council has mandated the European Commission and its foreign service to come up with a list of sanctions on Turkey to choose from should Ankara disregard its call to cease "illegal drilling in the Cypriot Exclusive Economic Zone."

"It is indeed paradoxical that, while Turkey does not recognize the Republic of Cyprus, a member state of the United Nations and the European Union that has concluded international agreements with its neighbors, (Ankara) attempts to invoke international law claiming at the same time to act upon the 'licensing' of an illegal occupying regime," the statement pointed out.

Cyprus's Rescue Coordination Centre had earlier warned mariners that a notice to mariners issued by Turkey for the area at issue was illegal as it referred to a region within Cypriot jurisdiction.

It also said that any drilling activity in the region would violate international law and would constitute a criminal offence.

Cyprus has issued international arrest warrants for all those involved in the drilling activities off its west coast and also instituted legal proceedings against three foreign companies providing support services to the Turkish drillship.

On June 10, a spokesperson of the Turkish Foreign Ministry said in a statement that "Turkey will continue to resolutely conduct its oil and natural gas exploration/drilling activities as planned, with a view to protecting its rights in its continental shelf, as well as the rights of the Turkish Cypriots, as a co-owner of the Island."