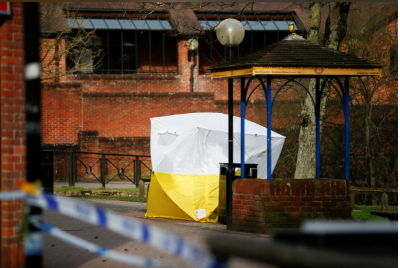 A tent covers the park bench where former Russian intelligence agent Sergei Skripal and his daughter Yulia were found after they were poisoned, in Salisbury, Britain. March 14, 2018. (Photo: Reuters)

Czech Foreign Minister Martin Stropnicky on Saturday denied Moscow’s accusation that the nerve toxin used against a former Russian double agent and his daughter in southern England came from the Czech Republic.

Russian foreign ministry spokeswoman Maria Zakharova told the Rossiya 24 TV channel on Saturday that the most likely source of the Novichok nerve agent was Britain itself or the Czech Republic, Slovakia, Sweden or the United States.

Russia expelled 23 British diplomats on Saturday in a retaliatory move against London, which has accused the Kremlin of orchestrating the nerve toxin attack and has ordered the expulsion of the same number of Russian diplomats.

“We object to these claims about the origin of (the toxin), which are not substantiated,” Stropnicky said on his official Twitter feed.

“This is a standard way of manipulating information in the public space through a highly speculative message being introduced which can not be proven.”

Czech Defense Minister Karla Slechtova, on her twitter feed, described the suggestion that the toxin could have come from the Czech Republic as “absurd”.