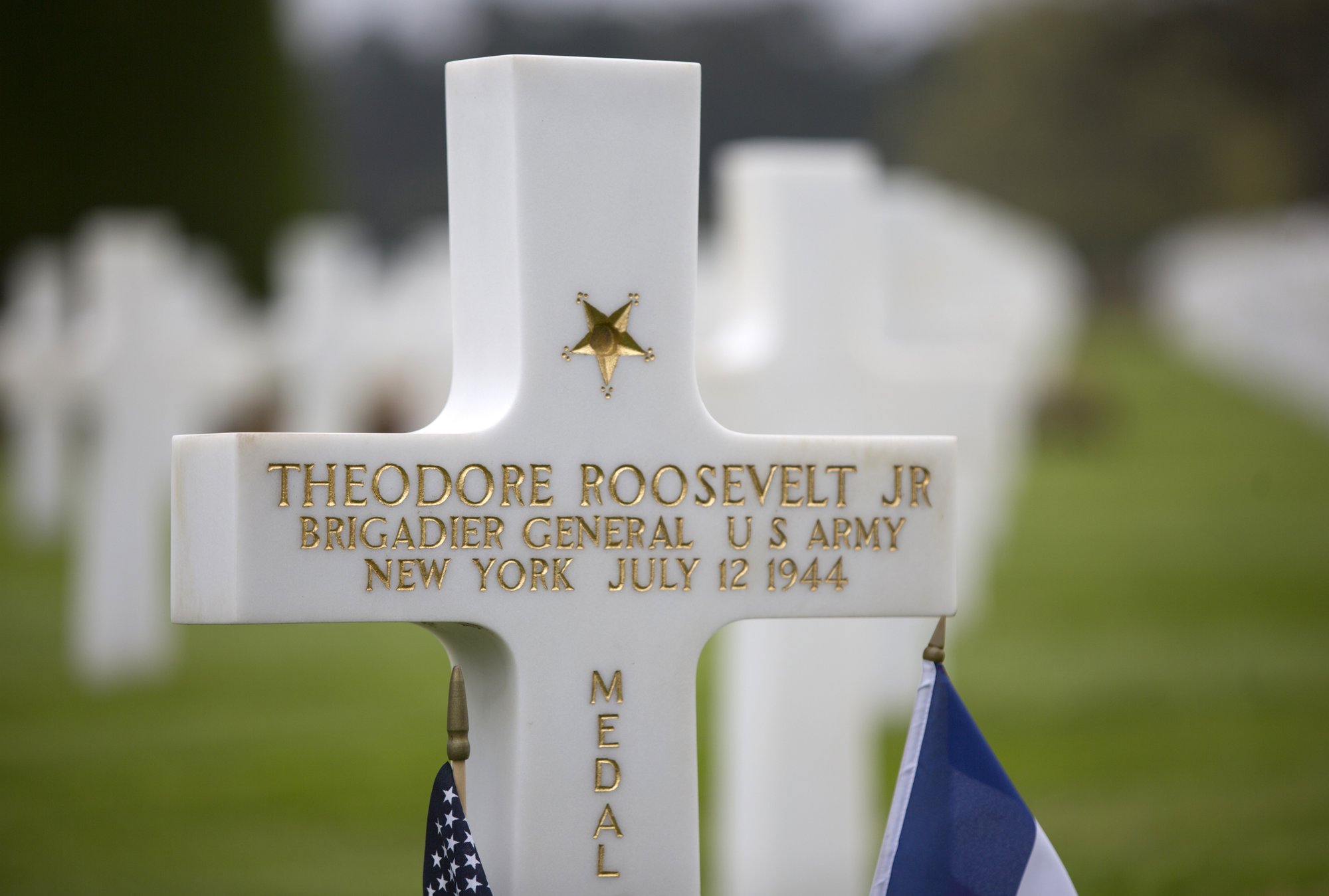 Side by side the presidential sons lie, separated by two world wars, united in their fervor for the freedom of France.

Quentin Roosevelt was a daredevil pilot shot by Germans close to Champagne country during World War I. His brother, Theodore Jr., was the only general in the first wave of D-Day attacks that turned World War II for good 75 years ago in Normandy. He died in France just weeks later.

Despite his despair at just having lost Quentin, former US president Theodore Roosevelt wrote that he knew of “nothing finer in our history than the way our young men have eagerly and gladly gone to France to fight for a high ideal.”

For the US military, they are still seen in the same light. “The Roosevelts made a huge, huge commitment to America for both wars as a family,” said Scott Desjardins, superintendent of the Normandy American Cemetery where both brothers are buried. “Teddy Roosevelt will go to war for us. His sons will go to war for us. Two of them will die, one in each of the wars.”

Those close US-French relations, which go back centuries, are being put under strain, however, under the current US administration.

Battered relentlessly by westerly winds from across the Atlantic Ocean but lovingly cared-for by French gardeners at the Normandy American Cemetery, the two pristine white crosses of the Roosevelts will be a focus of attention during the coming days’ events.

To mark 75 years since the D-Day invasion, US President Donald Trump and French counterpart Emmanuel Macron will visit the cemetery and will honor the remaining veterans and the fallen alike on Thursday just off Omaha Beach where thousands of Americans landed, and many died, on that fateful June 6.

The Trump administration, however, has little of the Roosevelts’ Atlanticist spirit.

France is now at the heart of the European Union and Trump has slapped tariffs on EU goods, pulled the US out of the EU-boosted Paris Climate Accord and the Iran nuclear deal and even suggested he might be willing to pull the US out of NATO if Europeans don’t significantly up their defense spending.

Last November, when leaders from across the world gathered to mark the centennial of the 1918 World War I armistice, Trump stood largely alone in the ceremonies. He even had a diplomatic spat with host Macron that played out on Twitter.

So any visit by Trump is now seen with trepidation.

The major international ceremony for D-Day will be held Wednesday in Portsmouth, England, on the eve of the 75th anniversary of the biggest amphibious military operation in history. On June 6 itself, Trump will cross the English Channel to visit the Colleville-sur-Mer cemetery and meet with Macron.

FROM LAFAYETTE TO TRUMP

The current sense of reluctance to back up European allies is something exceptional in trans-Atlantic history and certainly in presidential relations.

Ever since the Marquis de Lafayette fought with the Americans against the British in the American Revolutionary War in the late 18th century, there has been a bond between the US and France, especially during wartime.

US presidents have long been in the thick of action in France. Capt. Harry Truman fought in the 1918 Meuse-Argonne offensive , the coming-of-age moment for America’s military. Dwight D. Eisenhower was frustrated not to be able to fight in World War I but made up for it in 1944, when he led the D-Day landings.

In 1917, when the United States entered World War I, Theodore Roosevelt wanted to lead a volunteer army to France but was turned down. “I shall never cease bitterly regretting that I was not allowed to go to the other side. I would not have expected to come home alive,” he wrote.

It was the same kind of bravado — the French would say “elan” — that drove on his sons to help France.

Theodore Jr., already seriously wounded in World War I, led from the front during D-Day’s bloodied dawn, wading ashore on Utah Beach from a barge amid bullets splashing the water and bombs exploding close by. He won the Medal of Honor for his efforts.

“He was offered an administrative position that he turned down,” said Desjardins. “He didn’t have to come in on the first wave. He chose to do that.”

At 56 and walking with a cane, Theodore Jr.’s health could not keep up with his zest for action, though, and only six weeks later, he died of a heart attack close to the beach where he had his finest hour.

Even though two brothers died and were buried in France, they were not yet side by side. It was another brother, Archibald, who did something about that. In 1955, he requested that Quentin be moved alongside Theodore Jr., and it’s for that reason that the Normandy American Cemetery has one World War I victim among the remains of 9,388 servicemen and women that it cares for.

All are testimony to the trans-Atlantic friendship — a friendship that is now under strain.

It was only 15 years ago when President George W. Bush concluded his D-Day speech in Colleville-sur-Mer saying: “America would do it again for our friends.”

The world is wondering whether that is still true today.