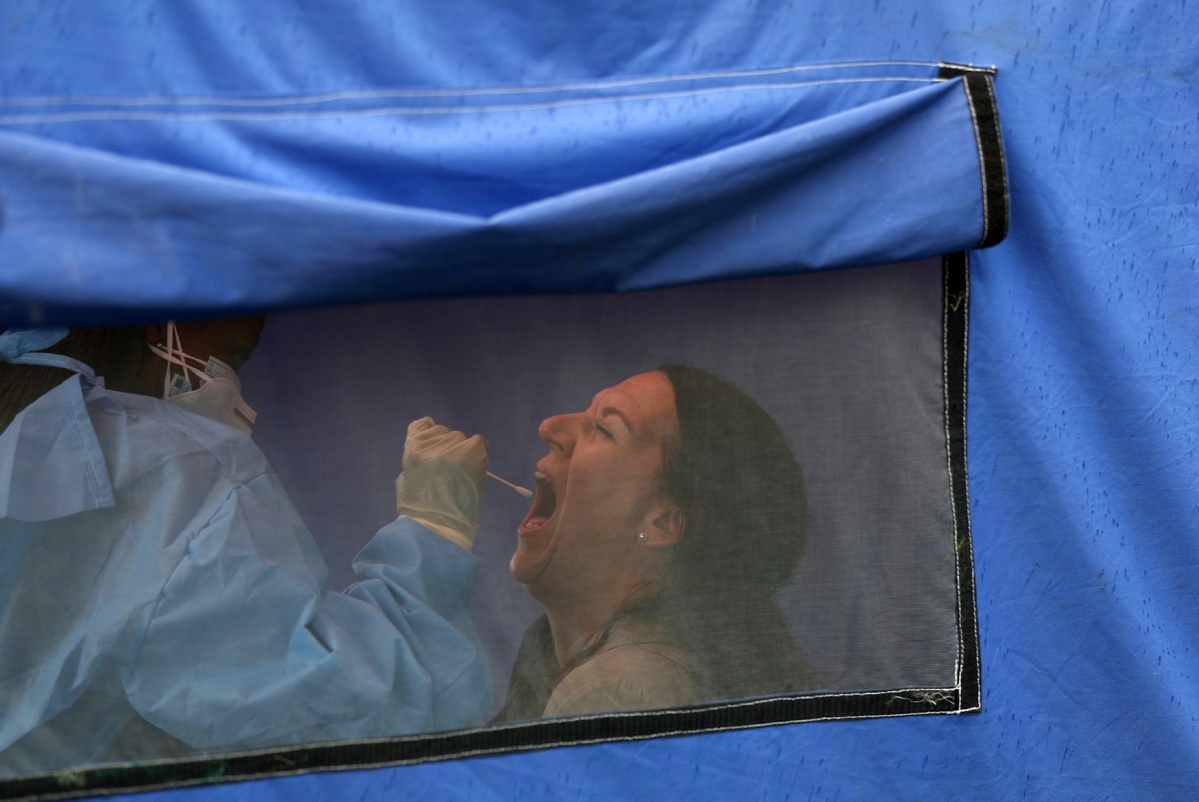 A traveler is tested for the coronavirus disease amid a nationwide COVID-19 lockdown, at the Grasmere Toll Plaza in Lenasia, South Africa, Jan 14, 2021. (Photo: Agencies)

Daily coronavirus cases in Africa have exceeded the first wave, with cumulative cases surpassing 3 million as the continent is confronted with emerging variants of the virus.

According to the World Health Organization, an average of 25,223 cases was reported daily across Africa between Dec 28 and Jan 10.

This figure is nearly 39 percent higher than the July 2020 two-week peak of 18,104 daily average cases. WHO has warned the numbers may rise further in the wake of traveling, gathering and festivities over the Christmas and New Year holidays.

As of Jan 14, the continent had recorded a total of 3,142,781 infection cases, translating to 3.5 percent of the total cases reported globally, and 75,709 deaths, accounting for 3.9 percent of the global figure.

According to the Africa Centers for Disease Control and Prevention, from Jan 4 to 10 the continent reported 222,753 new cases, translating to a 32 percent increase over the previous week.

During the same period, the continent reported 5,464 new deaths, representing a 21 percent increase in deaths over the previous week.

According to the Africa CDC, over the past four weeks the continent has recorded an 18 percent average increase in new cases each week.

In addition to the steep increase of infection cases from late November, a new virus dubbed 501Y.V2 is circulating widely in South Africa, accounting for most new infections in the country during the second wave.

WHO said genomic sequencing has found the variant present in Botswana, Gambia and Zambia.

Nigeria is also carrying out more investigations on a variant identified in samples collected in August and October.

The UN agency said deeper investigations are underway to fully understand the epidemiological implications, even though there are no indications the new variant increases the severity of the disease.

"Even if the new variant is not more virulent, a virus that can spread more easily will put further strain on hospitals and health workers who are in many cases already overstretched," said Dr Matshidiso Moeti, the WHO regional director for Africa.

"This is a stark reminder the virus is relentless, it still presents a manifest threat, and our war is far from won."

WHO said while for now there are no reports of the coronavirus variant cropping up in the African region, further investigation is needed.

"We call on all countries to increase testing and sequencing of the virus to swiftly spot, track and tackle new coronavirus variants as soon as they appear. To defeat an agile, adaptive and relentless enemy, we must know and understand its every move and double down on what we know works best against all variants of the virus," Moeti said.

"We must not become complacent. We must persist with the proven public health measures that helped stop the spread of the virus during the first wave – that's physical distancing, constant handwashing and wearing masks in public spaces."

Dr. John Nkengasong, director of Africa CDC, said African countries would require sufficient oxygen supply to fight the second wave of the coronavirus pandemic, which has hit the continent severely compared to the first wave.

He called on countries to subsidize masks, terming them as the currently most effective preventive measure. This is in addition to observing other health measures like social distancing and hands hygiene.

Nkengasong also urged countries to intensify and increase the preparedness of vaccine roll-out in the continent.

"Countries should start engaging and placing their vaccine orders so that we can know the volumes that have been ordered and Afreximbank can engage with the manufacturers and do the payment," Nkengasong said.

The African Vaccine Acquisition Task Team has secured a provisional 270 million vaccine doses for member states. At least 50 million doses from this tranche will be available during the crucial period of April through June.