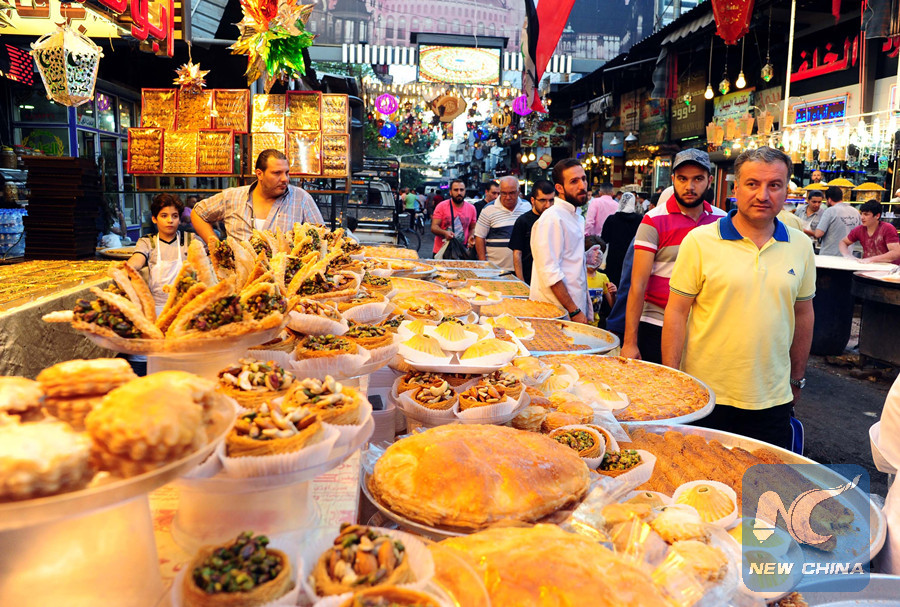 Syrians walk past a sweetshop showcasing special sweet ahead the upcoming Eid al-Fitr feast in the Midan neighborhood in the capital Damascus on June 12, 2018. (Photo: Xinhua)

For the first time in seven years, Samar Qasab, a mother of two, could prepare for the Eid al-Fitr feast without fear of mortar shells or unexpected explosions as the feast comes at a time when the entire Damascus city is far from war.

Walking with her son and daughter in Hamra street in the heart of Damascus, Qasab told Xinhua that the goods are expensive and "not her taste," but she was still happy.

"This is the first Eid al-Fitr we receive without war in Damascus. Even though the goods and clothes are overpriced, we are finally blessed with peace in the city," she said.

Qasab said walking freely and fearlessly is a priceless feeling missed in the capital for a long time.

She said life during the wartime in Damascus was dangerous as the mortar shells were fired by the rebels, rattling people in the area almost every day.

"Now, I appreciate every peaceful moment, whether walking on the streets or staying at home," she said.

The most important thing, she said, is that "I can now have my kids enjoy the celebrations of Eid without fear as in previous years we mainly chose to pay indoor visits to relatives."

In Hamra and other popular marketplaces where people usually go shopping for new clothes on the Eid occasion, a large number of people are window shoppers, as the prices this year are high and no new models are showcased amid reports of fraud carried out by some merchants.

The government-run Tishreen newspaper said in a special report Wednesday that there are fake foreign brands in the markets and there is no legal import of foreign goods, mainly the European ones.

It said that some clothes and shoes are sold as foreign brands while in fact there are made in Syria.

However, there are more people on the streets than previous years due to enhanced security situation.

Basima Fatouh, a university student, told Xinhua that the most important thing this year is the return of peace and security to the capital.

"Of course we have other problems such as high prices and hard economic situation for the middle-class people, but peace and security are more important, and I think people are celebrating it," she said.

When roaming in Damascus, it is noticed that people are more likely to buy special Eid al-Fitr sweets from popular marketplaces, such as al-Midan neighborhood, the main destination for sweet shoppers.

The Jazmatiyeh souk in al-Midan is jam-packed with people nowadays. Sweetshops are festooned with lights and banners, welcoming visitors and wishing them well on the Eid al-Fitr occasion.

"The good thing here is that they offer several kinds of sweets, which is affordable by a large number of shoppers and I am happy today to be prepared for the Eid al-Fitr amid such a peaceful atmosphere," Maher Awad, a carpenter said.

As a sign of improved security, the government started removing a considerable number of checkpoints, which were initially aimed to maintain safety in the capital but were complained about by people as they sometimes cause traffic jams.

Last month, the government removed 10 checkpoints after the end of the military operations in Damascus and its countryside for the first time in seven years.