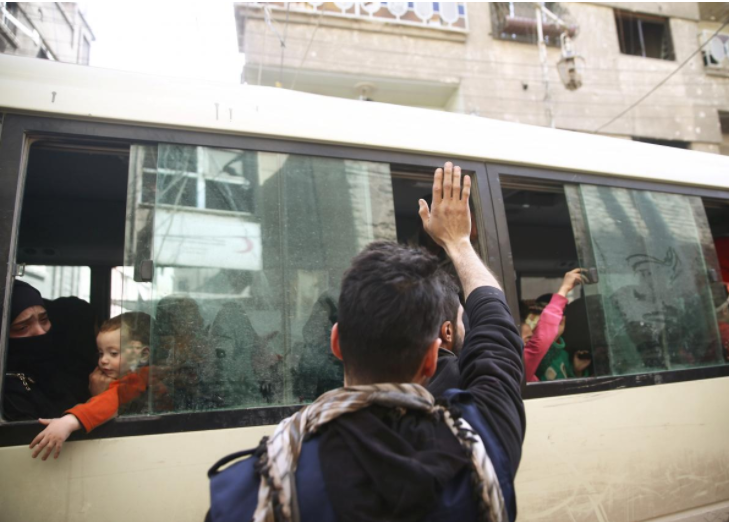 A man gestures as people are evacuated in the besieged town of Douma, Eastern Ghouta, in Damascus, Syria March 19, 2018. (Photo: Reuters)

Some rebels in eastern Ghouta may soon agree to withdraw from the opposition enclave or accept rule by the Syrian state after big advances by the army into the area, a Syrian government minister said on Monday.

Syrian government forces have splintered eastern Ghouta into three separate zones in a month-long assault to crush the last major opposition stronghold near Damascus, confronting the rebels with their biggest defeat since 2016.

Damascus and its Russian allies are offering rebels in eastern Ghouta similar terms to those offered in other parts of the country that have been recaptured: safe passage out for those who agree to surrender territory, or a reconciliation agreement for those who wish to stay under government rule.

The government offensive has been one of the deadliest of the war, killing more than 1,400 people in eastern Ghouta since last month, according to the Syrian Observatory for Human Rights. Tens of thousands of people have fled rebel-held areas into territory controlled by the government since Thursday.

Ali Haidar, the Syrian minister responsible for national reconciliation, told Reuters in an interview that rebels in an enclave centered around the town of Harasta - one of three rebel pockets in eastern Ghouta - may be ready to cut a deal.

He said the army had captured more than 80 percent of the area once held by rebels but the pace of advances may slow as the troops reach more densely populated areas and they try to avoid civilian casualties.

“There will be possibility for greater discussion in the matter of reconciliations in these areas to safeguard civilians and therefore the pace that we saw may slow a bit,” Haidar said.

With the sound of warplanes in the background, Haidar said there were contacts with rebels and “to a certain extent there are acceptable results in part of the file”.

“There may be an accomplishment in Harasta in the coming period. I don’t commit to specific timeframes because the matter is linked to the militants accepting departure or settling their situation (with the authorities) and the army entering the area,” Haidar said.

Rebels in eastern Ghouta have publicly ruled out the kind of negotiated withdrawal that helped Assad recover Aleppo, Homs and other areas, though figures close to rebels have said indirect talks have been underway to secure such an agreement.

The opposition accuses Assad of moving his opponents out of Syria’s main towns and cities to the border with Turkey in what it calls a systematic policy of “demographic change”.

Before the exodus from Ghouta, the United Nations estimated that some 400,000 people were living in eastern Ghouta, an expanse of farmland and towns that rebels have used to shell the capital during the conflict now in its eighth year. 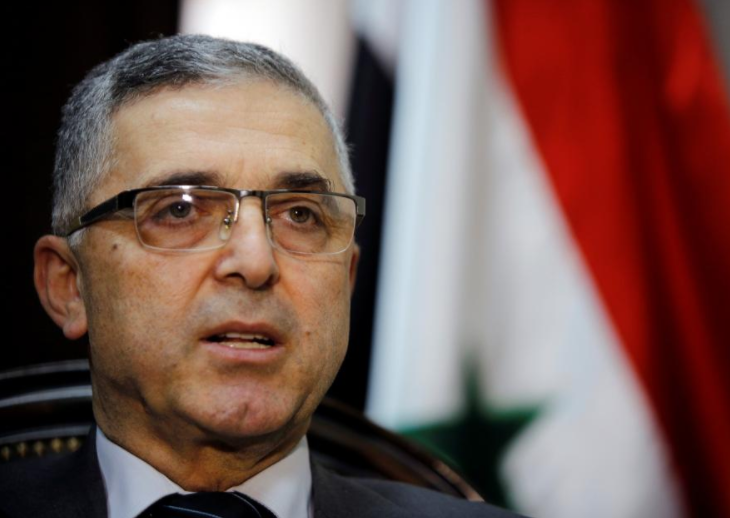 Syria's Minister of National Reconciliation Affairs Ali Haidar speaks during an interview with Reuters in his office in Damascus, Syria, March 19, 2018. (Photo: Reuters)

Assad visited soldiers fighting on the frontline on Sunday.

A video released overnight showed him in his car driving from central Damascus to eastern Ghouta, and discussing the war on his way, a sign of his confident position in the war now entering its eighth year.

“The road is open... everything is running now in the city and in Syria,” he said in the video, describing a road that had previously been cut by sniper fire and saying it was now easier to travel around the country.

Assad was shown in sunglasses at the wheel of his Honda car, speaking about the government’s increasing strength as peaceful scenery behind him gave way to battle-scarred concrete.