Authorities in the Portland, Oregon, region said they would keep cooling shelters open through Sunday night as a likely record-breaking heat wave brought scorching weather to the normally temperate region. 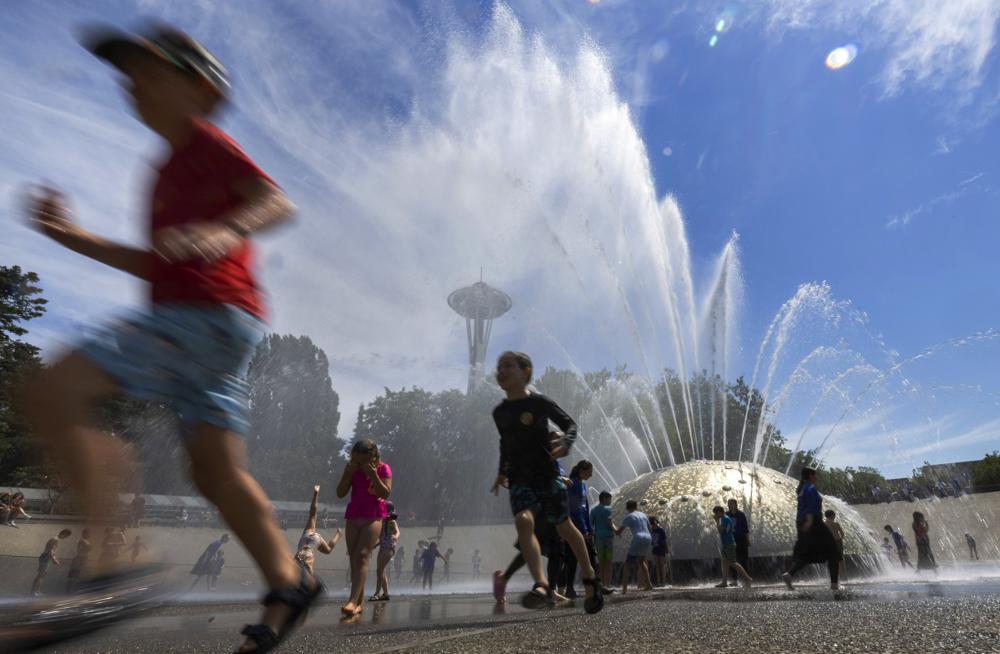 The International Fountain at Seattle Center is packed with children as they run from the water that is showering on them Wednesday, July 27, 2022 in Seattle. (Photo: AP)

At least seven people are suspected to have died from hyperthermia since the hot spell began a week ago. The most recent suspected heat-related death was announced by Clackamas County officials on Saturday, Portland television station KOIN-TV reported. County officials said the elderly man died in his home, where he did not have a working air conditioner. The other six suspected hyperthermia deaths occurred earlier in the week in Multnomah, Umatilla and Marion counties.

Jessica Mokert-Shibley, a spokesperson with Multnomah County, said the county, the city of Portland and other organizations would keep overnight cooling centers open through Sunday evening. Nearly 250 people used the overnight shelters on Friday night, she said.

Temperatures have neared the triple digits in Portland the entire week, hitting a high of 102 degrees Fahrenheit (38.9 Celsius) on Tuesday.

The National Weather Service issued an excessive heat warning for both the Portland and Seattle, Washington, regions lasting through late Sunday evening, with temperatures expected to reach as high as 103 degrees (39 C). Shawn Weagle, a NWS meteorologist based in Portland, said Saturday that the region had likely tied its record for its longest heat wave with six consecutive days in a row topping 95 degrees (35 C). A new record could be set on Sunday, Weagle said.

The temperatures have remained abnormally high at night — only dropping to about 70 degrees (21 C) — making it hard for residents to adequately cool off their homes before the sun rises, Weagle said. Many homes in the region lack air conditioning.

"It's an increasingly common issue with our heatwaves, the lack of recovery at night," Weagle said. "That really impacts people who don't have air conditioning. It's the 'urban island effect' — the downtown Portland core has been built up so much, and that concrete is slower to cool down overnight than a rural valley or even suburban neighborhood would."

The region's heat waves also seem to be getting stronger in general, Weagle said. He expects relief from the hot weather will come mid-week.

"Right now it's looking like Tuesday, we'll start to get closer to normal but still in the 80's, and by Wednesday we should be a touch below normal temperatures," he said.

The Seattle region was slightly cooler but still topped 90 degrees (32 C) on Saturday for a fifth straight day, compared to normal temperatures in the high 70s.

Weagle said people should drink plenty of water, do what they can to stay cool and check on their neighbors, particularly older people and those who are at greater risk of heat-related illnesses.

Climate change is fueling longer heat waves in the Pacific Northwest, a region where weeklong heat spells were historically rare, according to climate experts.

Residents and officials in the Northwest have been trying to adjust to the likely reality of longer, hotter heat waves following last summer's deadly "heat dome" weather phenomenon that prompted record temperatures and deaths.

About 800 people died in Oregon, Washington, and British Columbia during that heat wave, which hit in late June and early July. The temperature at the time soared to an all-time high of 116 F (46.7 C) in Portland and smashed heat records in cities and towns across the region. Many of those who died were older and lived alone.