An intense storm system that weather forecasters labeled "particularly dangerous" swept through the Southern Plains Monday, spawning a few tornadoes that caused some damage and a deluge of rain but no reports of injuries.

The National Weather Service had warned that Monday evening could bring perilous weather to a large swath of western Texas, most of Oklahoma and southern Kansas. The storm was expected to move later Monday into western Arkansas. 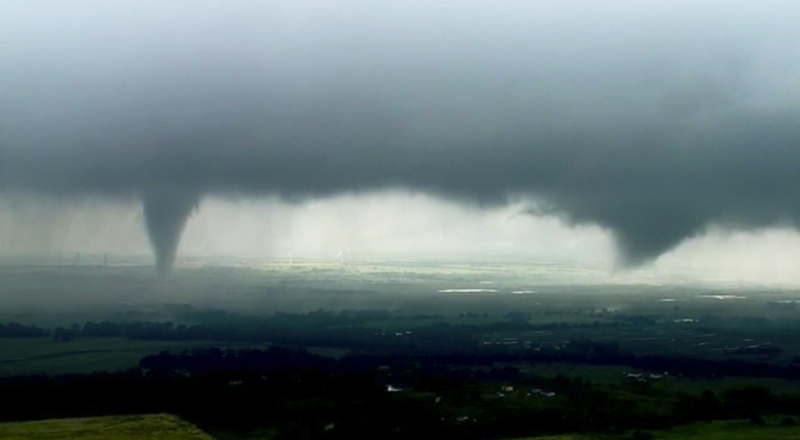 This image made from video provided by KWTV-KOTV shows two funnel clouds formed in Crescent, Okla., Monday, May 20, 2019. An intense storm system that weather forecasters labeled "particularly dangerous" swept through the Southern Plains Monday, spawning a few tornadoes that caused some damage and a deluge of rain but no reports of injuries. (Photo: AP)

As predicted, some tornadoes were reported early Monday evening, although they were in sparsely populated areas. Oklahoma residents were on alert as Monday is the sixth anniversary of a massive tornado in Moore, south of Oklahoma City, that killed 24 people.

A tornado struck western and northern portions of the southwestern Oklahoma town of Mangum on Monday afternoon. Glynadee Edwards, the Greer County emergency management director, says some homes incurred roof damage and the high school's agriculture barn was destroyed, but the livestock survived.

"The pigs are walking around wondering what happened to their house," she said.

Oklahoma Gov. Kevin Stitt said in a statement that the state emergency operations center was activated and urged motorists not to drive around barricades or into flooded roadways.

In Oklahoma City, emergency management officials opened the Multi-Agency Coordination Center, an underground bunker on the city's northeast side that serves as a clearinghouse for coordinating information about severe weather events and other major emergencies.

Some flights at Will Rogers World Airport in Oklahoma City were canceled to avoid damage to aircraft and the possibility of extended delays elsewhere.

It's the latest round of severe weather to strike the region after a spate of tornadoes raked the Southern Plains on Friday and Saturday, leaving widespread damage and some people injured.