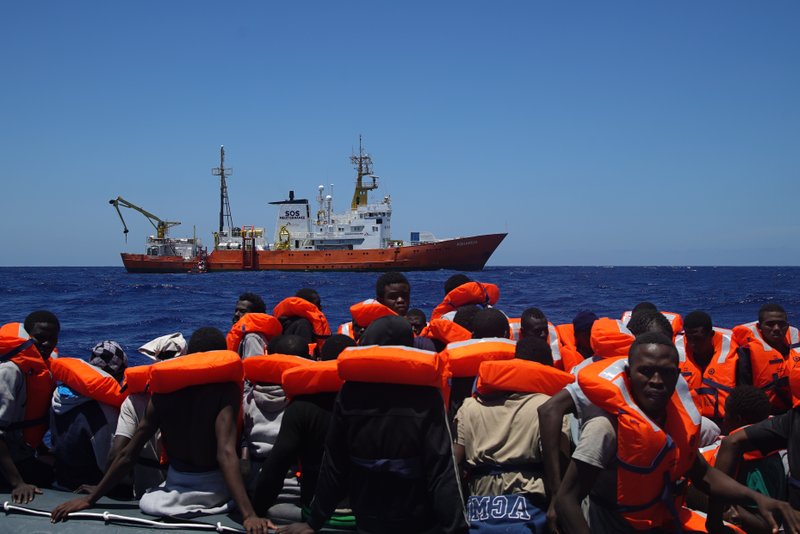 Migrants on a dinghy in the Mediterranean Sea wait to be rescued by members of the aid group Medecins Sans Frontieres (MSF), June 23, 2016. (File Photo: AP)

A Danish cargo ship with over 100 rescued migrants on board was off the coasts of southern Italy on Saturday, waiting for the permit from the Italian authorities to dock in one of the country's ports.

The container ship Alexander Maersk was about 3 miles off the port of Pozzallo in Sicily, a Coast Guard official with the local headquarter told Xinhua.

The commercial ship changed its course on Friday, after picking up 113 migrants that had launched a distress call while sailing in central Mediterranean on board of a rubber dinghy.

A team by German aid group Mission Lifeline that was already in the area supported the rescuing activities, the NGO said on Twitter on Friday.

"We offered our support to Alexander Maersk, and they thankfully accepted our offer," the NGO stated.

"Now we are on the scene, and our crew is assisting, while the (rescued) people have to climb a 5 meter knitting ladder," it added.

The Maersk Line -- to which the commercial ship belongs -- said the number of saved migrants were 113, and the rescue took place in waters "south of Italy", without further details on the area involved, according to state-run RAI News TV channel citing a company's spokesperson.

The ship was stationary off the port of Pozzallo, and waiting for instructions on what Italian port it may reach to disembark the rescued people, the Coast Guard captain told Xinhua.

As for all ships with rescued migrants and refugees on board, the port assignment was up to the Italian Interior Ministry, according to the officer.

Yet, it remained unclear whether the Danish cargo would be allowed at all to dock at any Italian port.

Italy's new right-wing coalition government has taken a hardline stance on immigration, as promised on the campaign trail.

Italian Interior Minister Matteo Salvini decided to turn away a rescue vessel with 629 migrants on board earlier this month. The ship was forced to change its course and dock at the Spanish port of Valencia.

In a message posted on Facebook on Saturday, the minister wrote that such NGOs which rescue ships should "forget to reach Italy."

"Stop the business of illegal immigration, the music has changed," he said.

Salvini is the leader of right-wing League party, which has long run an anti-immigration campaign, and has forged a coalition cabinet with anti-establishment Five Star Movement after March inconclusive elections.