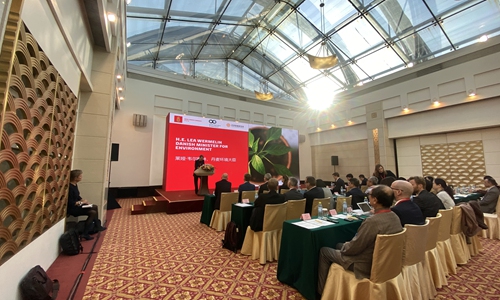 Danish Minister for Environment Lea Wermelin speaks at a conference in Beijing on November 26. (Photo: Courtesy of the Royal Danish Embassy to China)

Food waste has become a headache for many countries while many others around the world starve every day. As the UN is calling for sustainable development around the globe, some are trying to fix these problems.

Roughly one-third of food in the world produced for human consumption every year - approximately 1.3 billion tons - gets lost or wasted, according to the UN Food and Agriculture Organization (UNFAO).

Lea Wermelin, Danish Minister for Environment, has launched a ­campaign to promote a circular economy between the two kinds of countries to help resolve the issue.

"The Danish government is fully committed to protecting the environment for the sake of future generations. We believe that circular economy can contribute to this sustainable development," said Wermelin, who visited China last month to promote bilateral cooperation on improving resource efficiency and reducing food loss and waste.

The amount of food lost and wasted every year is equivalent to more than half of the world's annual cereal crops, UNFAO figures showed.

One-fourth of the food currently lost or wasted globally could feed 870 million hungry people, according to Liu Jianwen, a senior rural ­development specialist of the World Bank.

Denmark aims to reduce the amount of water used in Danish food processing by 15 to 30 percent, without putting food quality and food safety at risk.

It also wants to reach a 70 percent reduction of greenhouse gas emissions, compared to 1990 levels before 2030 in a way where all sectors contribute, said Wermelin.

"The Danish government aims to create an ambitious strategy for the green transition in our society so that we can produce and consume smarter, with respect for limited natural resources," Wermelin noted.

In regard to the China-Denmark cooperation on the circular economy, Wermelin believes the two countries have a common goal on how to make sure they are using the natural resources in the best possible way.

"Being such a big country, there's also a big challenge. It's not an easy way for China, and it's not easy for Denmark either to actually make that goal alone by 2030. So we need to help each other," she said.

"We invite key policy­makers, academia, businesses, key opinion leaders and social celebrities to join in  the discussions of food loss and waste in China. It is my hope that the initiative will strengthen the already great collaborations between Denmark and China," said Wermelin.

Zheng Lixia, a project coordinator of the China Office under the UN Environment Programme, said the current stage in China is the "key ­period" for its transition to sustainable consumption patterns.

Over the past 10 years, Danish exports of green technology solutions to China have consistently increased.

"We have a mutual framework which is on sustainable development goals. With this platform, of circular economy for the future, we have a new area to cooperate even more on between our two countries," Wermelin said.

In 2012, Denmark became part of the China-Europe Water Platform together with the Chinese Ministry of Water Resources.

"China is undergoing a major change these years with a high degree of urbanization and economic growth. Green solutions are needed to ensure the sustainable use of limited resources," said Wermelin.

"It is our responsibility to use our knowledge where it makes a concrete, green difference, and clean water and sanitation are essential to delivering on our common world goals."

Danish water supply today is solely based on groundwater. It has developed strong technologies and legal frameworks to safeguard a sustainable supply of clean and safe drinking water.

Water supply is not subsidized by the Danish government and the citizens using the water fully pay for individual consumption.

This results in remarkably low water consumption per capita in Denmark.

"The leading wastewater treatment plants in Denmark produce more energy than they consume. Utilities see wastewater as 'resource water' as they consider it a valuable resource that can be converted into energy," said Wermelin, adding that Danish wastewater plants must turn sludge into biogas.

People need to reduce their material consumption by doing it smartly, Wermelin noted, as Denmark approaches this challenge "through cooperation, education and knowledge sharing."

"To reach these goals it is crucial that we move away from a linear mindset of  'take-make-dispose' to a circular mindset that keeps products and materials in use. And we definitely need to support more circular business models," she said.