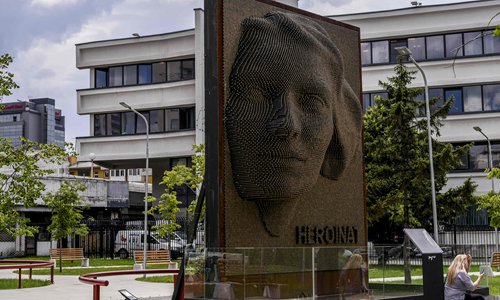 A woman sits in front of the monument named "Heroines," to honor the contribution and sacrifice of every ethnic Albanian woman during the 1998-99 Kosovo war, in Pristina, on July 26, 2018. (Photo: VCG)

Raped during Kosovo's war for independence, Zana and thousands of other women are now eligible for financial aid from the government - a victory hard-won through years of lobbying.

But the battle is not over yet: a culture of shame keeps many victims from coming forward in a society where rape is viewed as a stain on the family's honor.

Now 41, Zana, who asked to use a pseudonym to avoid being identified, wrings her hands as she painfully recalls a memory she says "feels like it was today."

A 22-year-old student at the time, Zana and her teenage sister were kidnapped by Serbian forces in May 1999, one month before the end of a brutal conflict that claimed around 13,000 lives, mostly ethnic Albanians.

The sisters were brought to an ethnic Serb village and raped repeatedly in a warehouse, Zana told AFP.

"They drank, sang and played before turning to us. I don't know how many of them raped me as I fainted during the first rape," she recalled, with a trembling voice.

Zana woke up next to her sister, who was crying quietly. The men were gone.

While the precise number of women raped by Serbian forces in the 1998-99 Kosovo war remains unknown, rights groups estimate the figure could be as high as 20,000.

But since the monthly 230-euro ($270) allowance for wartime rape survivors became available in February, only 600 people have signed up.

Around 115 applications, including Zana's, have been accepted.

"It was the first official recognition that I am a victim of the war," Zana said, when asked why she decided to break a nearly 20-year silence imposed by her relatives.

"Also, it was the first opportunity to share my burden with someone else outside of my family."

Although the identities of those who apply for the allowance are kept confidential, a deep-seated stigma is still keeping many victims in the shadows.

Many women have kept their trauma a secret for years, even from their closest relatives.

"Those who are raped are considered as persona non grata in their families and consequently in society," explained Selvije Izeti-Carkaxhiu, a psychologist who counsels victims.

This culture of shame "prevents victims from talking openly about their trauma or seeking justice," added Behxhet Shala, the head of Kosovo's Council for the Defense of Human Rights and Freedoms.

"This could be called the silence taboo," he told AFP, saying the pressure to stay quiet is as powerful as the "omerta," the notorious code of silence invoked by Italian mafia.

As well as adding to the victims' distress, the sworn secrecy has helped shield perpetrators from the law.

An international tribunal in The Hague convicted three senior Serbian officials for employing "sexual assaults" during their campaign of violence in Kosovo.

But inside Kosovo itself, courts have yet to convict a single rapist since the conflict, according to the Humanitarian Law Center, an NGO that monitors war crime trials.

Kosovo's judiciary has only carried out three prosecutions for wartime rape, all of which have ended in acquittal, according to Amnesty International.

"Isolation and silence have not helped anybody more than the rapists," said Feride Rushiti, who runs the Kosovo Rehabilitation Centre for Torture Victims (KRCT), which offers assistance to war victims.

Kosovo's government admits that wartime rape remains one of the most inadequately addressed crimes of the conflict.

Deputy Prime Minister Behgjet Pacolli has described it as "one of the biggest wounds which continues to weigh on a considerable part of Kosovar society."

However, civil society groups say the government has done little to help rape survivors access healthcare, employment and other forms of support.

In 2014, hope was lifted when parliament finally approved a law that recognized survivors of sexual violence as war victims and made them eligible for the monthly aid.

However, registration for the payments did not open until 2018, and only a sixth of applications have been approved.

Rights groups have also criticized the policy for applying only to women raped before the end of the war, excluding therefore those assaulted in the months following June 1999, including Kosovo Serbs targeted in revenge attacks by ethnic Albanians.

For Minire Begaj, who leads the government commission that processes applications, "the most important thing is that we launched this process."

"It is not about the money… but about establishing a new approach to the victims of war sexual violence that will relieve their pain," she told AFP.

Zana is still waiting for her first cheque to arrive, but says her real dream is the day when society will no longer "blame and make us (feel) guilty like the perpetrators."

"I will get peace of mind only when I will feel free to cry out publicly that I was the one who was raped and that they should not treat me as if I'm guilty as a rapist, but as someone they should say sorry to," she said.