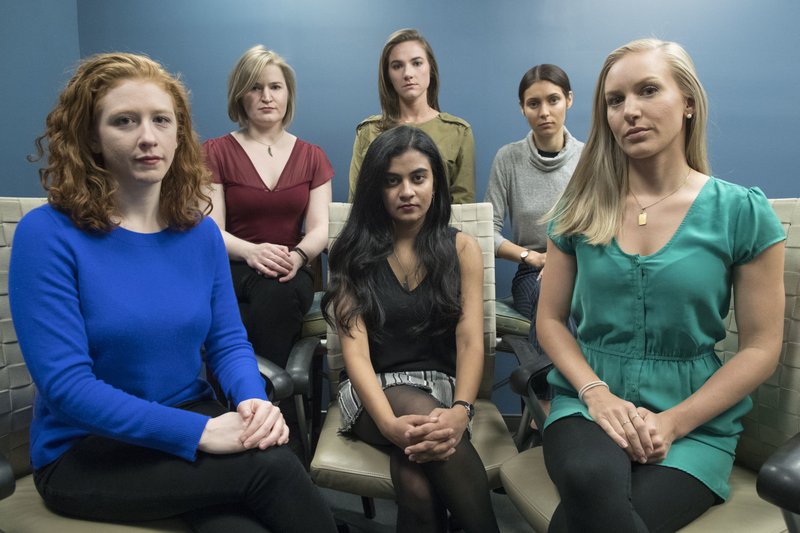 Dartmouth College was sued Thursday for allegedly allowing three professors to create a culture in their department that encouraged drunken parties and subjected female students to harassment, groping and sexual assault.

Seven women filed the lawsuit in federal court in New Hampshire against the elite college’s trustees. It contends that professors William Kelley, Paul Whalen and Todd Heatherton harassed and touched women inappropriately, often while out partying at bars or at their homes where one hosted hot tub parties.

Kelley and Whalen are each accused of assaulting a student after a night of drinking, attempting to seduce women under their supervision and punishing those who rebuffed their advances in the Department of Psychological and Brain Science (PBS).

“The seven plaintiffs, each an exemplary female scientist at the start of her career, came to Dartmouth to contribute to a crucial and burgeoning field of academy study,” according to the lawsuit. “Plaintiffs were instead sexually harassed and sexually assaulted by the Department’s tenured professors and expected to tolerate increasing levels of sexual predation.”

Dartmouth praised the women for coming forward but denied allegations that it ignored complaints that allegedly date back as far as 2002.

“I would like to reiterate that sexual misconduct and harassment have no place at Dartmouth,” Dartmouth President Philip Hanlon said in an email to the college community Thursday. “We applaud the courage displayed by members of our community within PBS who brought the misconduct allegations to Dartmouth’s attention last year. And we remain open to a fair resolution of the students’ claims through an alternative to the court process.

In October 2017, Dartmouth launched an investigation into the three professors. It never released the findings and was preparing to fire all three. But Heatherton retired this summer after being told he would be fired and denied tenure. Whalen and Kelley resigned soon thereafter.

The New Hampshire Attorney General’s office has also launched its own investigation.

Whalen and Kelley could not be reached for comment, and it is unclear if they have attorneys. Heatherton apologized for acting inappropriately at conferences but said, through a lawyer, that he never socialized or had sexual relations with students.

Six of the plaintiffs were graduate students and one was an undergrad.

The lawsuit paints a harrowing picture of women being forced to endure a program in which their academic careers were dependent on men who seemed mainly interested in drinking and getting them into bed. Those who refused to take part in their parties or bar hopping were often denigrated or ignored, according to the lawsuit.

Repeatedly, the lawsuit alleges, the three would set about grooming incoming graduate students. They would often comment on their physical appearances, give them extra attention and then bombarded them with invitations to drink with them at local bars or while out at conferences. When the women would oblige, they would seek to get them drunk and take advantage of them.

One of the plaintiffs, Kristina Rapuano, alleges that Whalen in March 2014 forced himself upon her and put his hands down her pants when she visited his office. About a year later, she attended a conference with Kelley and alleges that he got her drunk and raped her. The lawsuit does not say whether she went to the police.

After the assault, she alleges Kelley kept pressing her for sexual favors. When Rapuano finally rebuffed him, she said Kelley became hostile, stopped providing her with academic guidance and attempted to undermine her research by sharing it with colleagues.

“This is the person who really holds the keys to your future,” Rapuano, who completed her doctoral degree at Dartmouth this spring and is now at Yale University, told The Associated Press. “For me, it became a situation where I felt trapped and I couldn’t get away from it because getting away from it meant leaving the career that I had worked so hard to get at.”

Vassiki Chauhan, another plaintiff who is still at Dartmouth who alleges she was raped by Whalen at his home, said everyone in the department was aware of the trio’s behavior but took no action. She did seek medical attention, but the lawsuit does not say whether she went to the police.

The AP does not typically identify people who say they are victims of sexual assault unless they grant permission, as Chauhan and Rapuano have done along with four plaintiffs in this case.