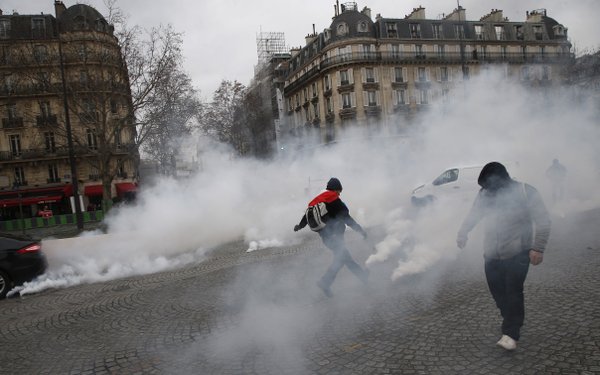 A demonstrator kicks away a teargas canister fired by police during a march in Paris, Saturday, Jan. 26, 2019. (Photo: AP)

Multiple anti-government protests took place in Paris and other cities, centered on Macron policies seen as favoring the rich. France deployed about 80,000 police officers to patrol the events and to disperse trouble.

A few cars were set ablaze in the Normandy town of Evreux. In Paris, crowds gathered at the columned headquarters of France’s lower house of parliament. Police used tear gas on demonstrators at the iconic Bastille Plaza who hurled items within reach.

Armored vehicles circled the Arc de Triomphe monument as a group of protesters weaved down the elegant Champs-Elysees, the site of recent rioting.

Some yellow vest leaders want to maintain momentum by holding protests after dark as well as during the day. Two groups planned Saturday events at Place de la Republique in eastern Paris, and some protesters threatened to try to defy police and stay overnight.

Macron has sapped some support for the movement by taking an active role in recent days in a national debate in towns across France, launched to address the protesters’ concerns.

Participants at the Champs-Elysees march called Macron’s national debate a “smoke screen” to distract the French from his pro-business policies. They expressed views from the far left to the far right, or a middle-ground, middle-class malaise. Many want Macron to restore France’s wealth tax and allow the public to propose national referendums on anything from pulling France out of the euro to rewriting the constitution.

“We are forgotten,” said protester Mervyn Ramsamy, a hospital employee from north of Paris lamenting recent closures of maternity wards and other medical services in already struggling areas. “We won’t give up.”

It’s unclear how long the movement can maintain its momentum. Macron scrapped the fuel tax hike that initially sparked the protests and offered widespread tax relief when the protest violence hit a peak in December.

One branch of the movement launched a bid this week for the European Parliament elections in May, but other protest leaders disagree with the idea.

In another challenge for the yellow vest movement, rival groups calling themselves the “red scarves” plan demonstrations Sunday to condemn violence unleashed by recent protests.

Police armed with guns firing non-lethal rubber balls — which have seriously injured several — are equipped with body cameras Saturday for the first time, in an experiment to record use of the weapons, providing context and eventual evidence if needed.

In between the Saturday protests, yellow-vested crowds occupy scattered roundabouts and tollbooths around France , disrupting traffic to express a sense of neglect by the central government. The movement began Nov. 17, named after the fluorescent garments French motorists must carry in case of emergency.