It's the soundtrack of "Chocolate City," the non-federal Washington that has traditionally been a tent pole of black America. 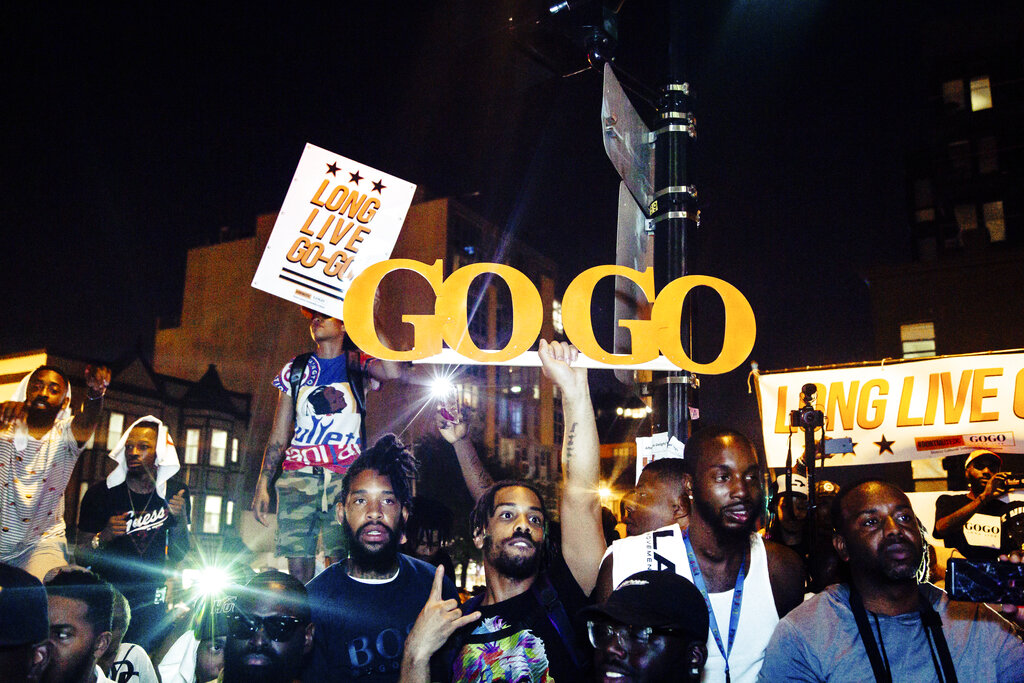 In this image provided by Akil Ransome, Moechella music rally at the corner of 14th and U street NW in Washington, Tuesday, May 7, 2019. (Photo: AP)

Go-go music, a distinctive DC-specific offshoot of funk, has endured for decades through cultural shifts, fluctuations in popularity and law enforcement purges.

Now go-go has taken on a new mantle: battle hymn for the fight against a gentrification wave that's reshaping the city.

"It's a very deep cultural thing," said Justin "Yaddiya" Johnson, an activist and creator of the #Don'tMuteDC campaign. "When you think about go-go, you should think about DC culture. It should be the symbol of our culture."

Many longtime Washingtonians fear that culture is being steadily eroded as the city becomes whiter and richer. A recent controversy over an innocuous noise complaint placed go-go at the center of a perfect storm of gentrification symbolism.

The owner of a popular mobile phone store in the historically black Shaw neighborhood was told to turn off the go-go that he had been playing through sidewalk speakers for more than 20 years. He claims the complaint came from a resident of the gleaming new mixed-used apartment building erected on the next block.

The reaction was fierce. Seemingly overnight, a protest movement and petition drive sprung up and members of the DC Council started weighing in. Within days, the decision was reversed.

The mini-controversy was over almost before it started. But it obviously touched a nerve.

"I think that was messed up. Go-go IS DC Go-Go is our history," said community activist Tiffany Richardson, one of the thousands of fans who turned out on a Tuesday night this month for an outdoor concert/protest featuring go-go mainstays Backyard Band. "They're not going to stop go-go."

The concert, mischievously named "Moechella," was organized by Johnson under the #Don'tMuteDC banner. And since it was a protest, he didn't need to secure a permit, so police obligingly blocked off several city blocks. The location —the corner of 14th and U streets — was no accident. That intersection was once one of the hearts of black DC; now it's within two blocks of a Trader Joe's and a lululemon.

To the uninitiated, go-go music seems indistinguishable from funk. What sets it apart are a specific conga-driven syncopation, known as the pocket beat, and a culture of call-and-response that turns the crowd into part of the show. Go-go bands feature multiple percussionists and often multiple vocalists— with one usually designated as "lead talker."

"It's the drumming it's the rhythm pattern. It's the feel of the rhythm," said Liza Figueroa Kravinsky, founder of the band Go-Go Symphony. "In go-go, the fans know who the conga player is more than the guitar player."

The late Chuck Brown is generally considered the godfather of the sound, starting in the early 1970s. And bands like Rare Essence and Trouble Funk have all flirted with mainstream success, but there has never been a full-scale breakout star. Probably the most famous go-go song is "Da Butt" by Experience Unlimited, which was showcased in the Spike Lee film "School Daze."

While the music retains a local fanbase, musicians and devotees say the scene is still recovering from the effects of the crack epidemic, which ravaged Washington and turned go-go shows into magnets for violence. Eventually police began shutting down famous clubs like the Ibex in 1990s and forcing the shows out of the city.

Anwan "Big G" Glover, lead talker of Backyard Band, still recalls the time with bitterness. Authorities blamed the music for drawing violence when he says go-go was simply the ambient soundtrack of a city in crisis .

"Those rave parties in the suburbs with these rich kids — if anything happened there, they could just cover it up. That was the difference," he said.

The purge was especially damaging because go-go is all about live performances. Glover and others say there's a missing generation of fans who weren't exposed to live go-go in their youth.

"The reason a lot of kids don't know about go-go is that it's been erased," said Angela Byrd, founder of "Made in the DMV" incubator for local artists and activists. She was speaking at a recent #Don'tMuteDC conference. "I feel like go-go was pushed out, but it's coming back."

This official mistrust has continued. As recently as 2010 the alternative weekly City Paper published the Metropolitan Police Department's bi-weekly internal "go-go report" tracking all the shows in the area.

Glover says the attitudes of the police have eased a bit in recent years and Backyard Band and others now play regular shows around the district. But there's still a shortage of the all-ages shows that used to be the main gateway for young new fans. That age gap was evident during one of Backyard Band's recent shows at a bowling alley in Chinatown. The concert drew a healthy crowd of about 150 people — many of whom were obvious hardcores who knew every song by heart. But almost everybody seemed to be at least 35 years old.

Now the renewed attention comes at a time when go-go may organically be approaching one of its periodic flirtations with mainstream popularity .

Glover has gained personal fame for a memorable recurring role as Slim Charles on the popular TV show "The Wire." Artists as diverse as Snoop Dog and Dave Grohl from Foo Fighters have paid public tribute to the genre. Rare Essence and Backyard Band have both performed at the South by Southwest music festival and Backyard Band recently scored an improbable hit with a go-go cover of Adele's "Hello." Wale, the most famous Washington rapper, pays regular homage to go-go and recorded a song with TCB, purveyors of a neo-go-go sound called bounce-beat.

But local musicians still feel authorities have kept the culture at arms-length. They want to see the District government embrace go-go the way Chicago has done with blues and New Orleans with jazz. They want a go-go museum , a hall of fame and go-go landmark-themed tours.

"They love us at campaign rally time," he laughed. "They know that's the only way to bring people out."