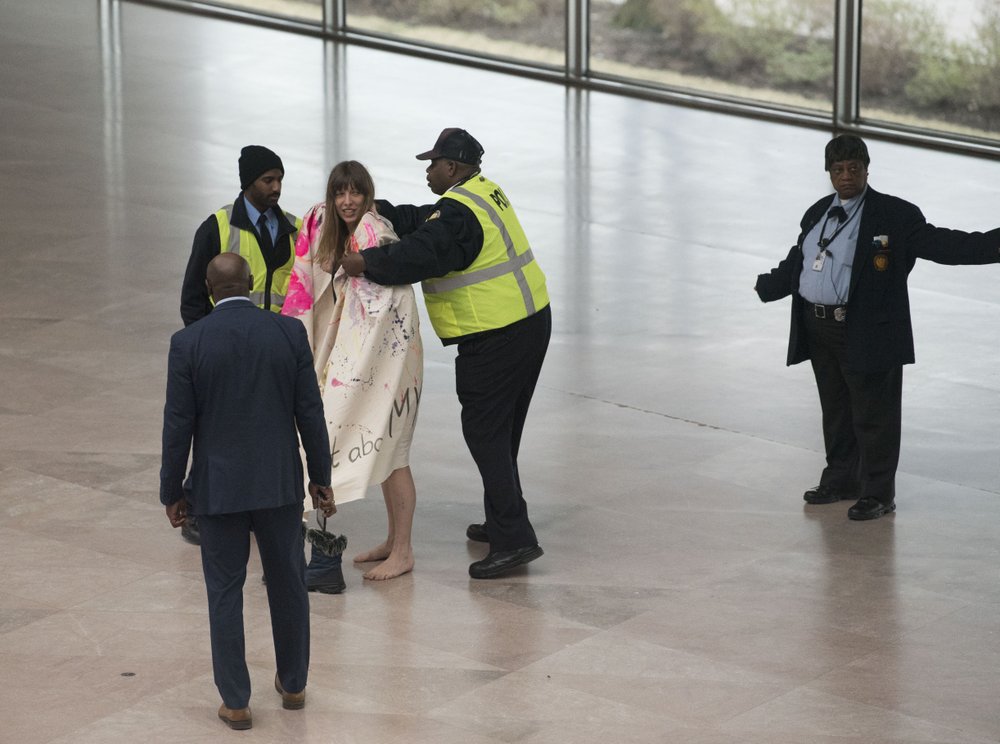 National Gallery of Art security cover Radical Matriarchy member Laura Newman with a blanket after she removed her clothes and sang during a protest in the museum, Thursday, Feb. 14, 2019 in Washington. Radical Matriarchy was protesting the fact that 90% of the art inside is by white men. In the nation’s capital, it can be hard for protesters to stand out. Fifty people _ or even 500 _ holding signs and shouting hardly merits a second glance in this city of protests. That’s why Washington activists have to get creative. (Photo: AP)

In the nation’s capital, it can be hard for protesters to stand out. A group of 50 people — or even 500 — holding signs and shouting hardly merits a second glance in this city of protests.

That’s why Washington activists have to get creative. There’s an ethos of performative prankster-style protest wired into the District of Columbia’s history, dating back decades.

This confrontational street-theater school is flourishing with the Trump administration as its nemesis. Each month brings new acts of political theater — some confrontational, some deliberately absurdist.

“It can take a serious issue into more of a playful place,” said Robin Bell, who regularly projects disparaging messages onto the outside of the Trump International Hotel. “Oftentimes we visualize the absurdity of the situation.”

While some protests are designed to get attention, others hide in plain sight like Easter eggs for the observant. Within sight of the White House, a realistic-looking street sign declares the street Khashoggi Way, after Jamal Khashoggi, the dissident Saudi journalist killed inside the Saudi Consulate in Istanbul. About 10 of these signs have been scattered around Washington.

Activist Claude Taylor said he planted his first sign in front of the Saudi Embassy, where it lasted 24 hours before being removed. But he’s pleased the sign outside the White House has lasted so long — more than a month — since his protest is against both Khashoggi’s murder and what he considers Trump’s soft response. Taylor also drives around town carrying an inflatable effigy depicting the president as a giant rat .

“It’s got to be art, it’s got to be creative. That’s what gets people hooked,” said Adam Eidinger, perhaps Washington’s most high-profile political provocateur.

Eidinger is one of the District’s public faces for marijuana legalization and is known for disruptive protests. In 2017, his group passed out 1,000 joints on Capitol Hill, but only to ID-carrying congressional staffers. He says he still owns a small jail cell on wheels for use in political stunts.

“One of the goals is to have a psychological impact, to get into their heads,” he said.

He says he’s been arrested 23 times, although he emphasizes that usually isn’t the point.

“Just getting arrested is not creative. You should be willing to get arrested doing something else transgressive,” he said.

A day earlier, activists targeted the Philippine Embassy with a protest that was deliberately obscure. Around 7 a.m., several people strung swaths of red jute fabric on every tree, sign and lamp post surrounding the embassy, including the nearby statue of Daniel Webster. Last month, this group wrapped an enormous stretch of jute around the entire embassy fence, blocking both driveways.

It’s an elaborate protest against Philippine President Rodrigo Duterte’s war on drugs, in which human rights groups estimate more than 10,000 people have been killed by police and militias.

But there were no signs indicating that. In fact, given the date, most passers-by probably assumed it was related to Valentine’s Day.

“There’s a deliberate mystery to what we’re doing” said an organizer, speaking on condition of anonymity to avoid prosecution. “Our audience is the embassy. Hopefully the guy at the embassy is going to be like ‘I don’t know what this is about, but I better tell my boss.’”

An embassy spokesman said local authorities had been contacted, but that all forms of “peaceful freedom of expression are all welcome.”

The godmother of this local protest ethos is Nadine Bloch, a resident of the historically liberal hotspot of Takoma Park, Maryland, located just over the Washington line. Bloch’s activism goes back to captaining a ship for Greenpeace in the 1990s seeking to disrupt French nuclear tests. Both Eidinger and Bell credit her with helping form their own sensibilities as part of the Washington Action Group.

“Nadine gathered all these people in the late ’90s and now they’re out there on their own doing it,” Eidinger said.

Bloch speaks of the “artist-activist” and trains activists in a school of creative revolution known as “beautiful trouble.” She said simple public weirdness is not enough and counsels activists to think through their goals, their message and their audience.

“A lot of people are in love with their clever tactics,” Bloch said. “But if you don’t know what your goal is, then good luck if your message actually delivers.”

In the institutional memory of Washington’s activists, December 1987 stands as an iconic moment. That’s when posters suddenly appeared across town with a brutal assessment of President Ronald Reagan’s attorney general, Edwin Meese: “Experts Agree: Meese is a Pig.”

Their origin was a local mystery at first, eventually revealed to be the work of Jeff Nelson, drummer for the Washington-based political hardcore band Minor Threat.

Nelson said his posters weren’t particularly clever or constructive but more like a vulgar scream of frustration.

“I was just looking for some sort of megaphone to shout back,” said Nelson, now 56 and living in Toledo, Ohio. “Basically I did what I knew how to do, which was silkscreen posters.”

When Bell, the projectionist, started targeting the Trump hotel after the 2016 election, he paid homage to his forebears.

His first projection said: “Experts Agree: Trump is a Pig.”