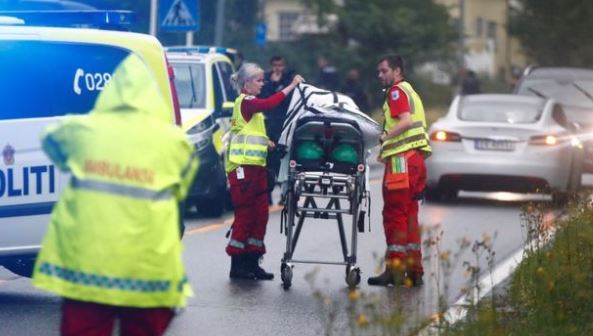 OSLO, Aug. 10 (Xinhua) -- A dead person was found after the Mosque shooting outside Oslo on Saturday, and it was being investigated in related to the shooting incident, police said late Saturday.

Norwegian public broadcasting company NRK quoted police as saying the area where the dead man was found was blocked off in Baerum, just west of Oslo.

"In the house we have found a dead person whom we put in connection with the case", which happened earlier in Skui, a district in Baerum, said Brian Skotnes of Oslo police.

Earlier reports said one person was injured in the shooting in the Al-Noor Islamic Center in Baerum. The perpetrator was also wounded and later arrested. He was said to be a white-skinned man in his 20s.

The perpetrator resides in the vicinity of the mosque, and was known to police from before, Norwegian police said in a press release.

According to broadcaster TV2, he has praised online Australian shooter Brenton Harrison Tarrant that killed 49 Muslims in New Zealand massacre in March this year.

Norwegian police are now working to assess the security situation since Eid al-Adha, the second significant religious festival of Islam, will start on Sunday.