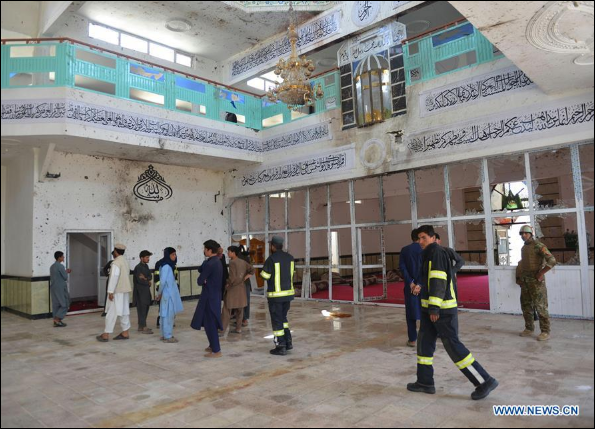 Photo taken on Aug. 4, 2018 shows the Imam-i-Zaman Mosque after an attack in Gardez city, the capital of Afghanistan's eastern Pakia province. The deadly attack on the mosque which killed over dozens people and injured scores others on Friday, has drawn wide condemnation. (Photo: Xinhua)

KABUL, Aug. 4 (Xinhua) -- The deadly attack on a mosque in Gardez city, the capital of Afghanistan's eastern Pakia province, which killed over dozens people and injured scores others on Friday, has drawn wide condemnation.

Afghans from all walks of life have described the attack as a cowardly act of terror and strongly condemned it.

The war-weary Afghans have also called upon government to identify and bring to justice all those behind the killing of innocent civilians.

"Attack on the worshippers inside a mosque is a crime and an attack against humanity which goes against Islamic teaching and Islamic values," Afghan President Mohammad Ashraf Ghani said in a statement released by his office hours after the bombing.

Although no group and individual has claimed responsibility for the deadly attack, the locals and officials have not ruled out the involvement of the hardliner Islamic State (IS) outfit in the massacre.

The Taliban group has already rejected its involvement in the bombing.

Paktia police chief Raz Mohammad Mandozai said the attackers entered the mosque during Friday prayers and attacked the worshippers with gunshots and blasts.

"Those who are responsible for launching this attack must be brought to justice and held accountable," the UNAMA chief in Kabul said in a statement.

"Attack on civilians especially on worshipers inside a mosque in no way is justifiable. It is the responsibility of THE government to protect its citizens and bring to justice all those behind such heinous crimes," Kabul resident Assadullah told Xinhua.

"This attack is not the first and won't be the last one and the Afghans would continue to suffer unless the government adopt bold stance and publicly execute the terrorists," Assadullah said.

Families of the victims in Gardez city have called upon the government to severely punish all those involved in terrorist activities.