Hurricane Dorian came to a catastrophic daylong halt over the northwest Bahamas, flooding the islands of Abaco and Grand Bahama with walls of water that lapped into the second floors of buildings, trapped people in attics and drowned the Grand Bahama airport under 6 feet of water. At least five people died and 21 injured people were airlifted to the capital by the U.S. Coast Guard, Bahamas officials said. 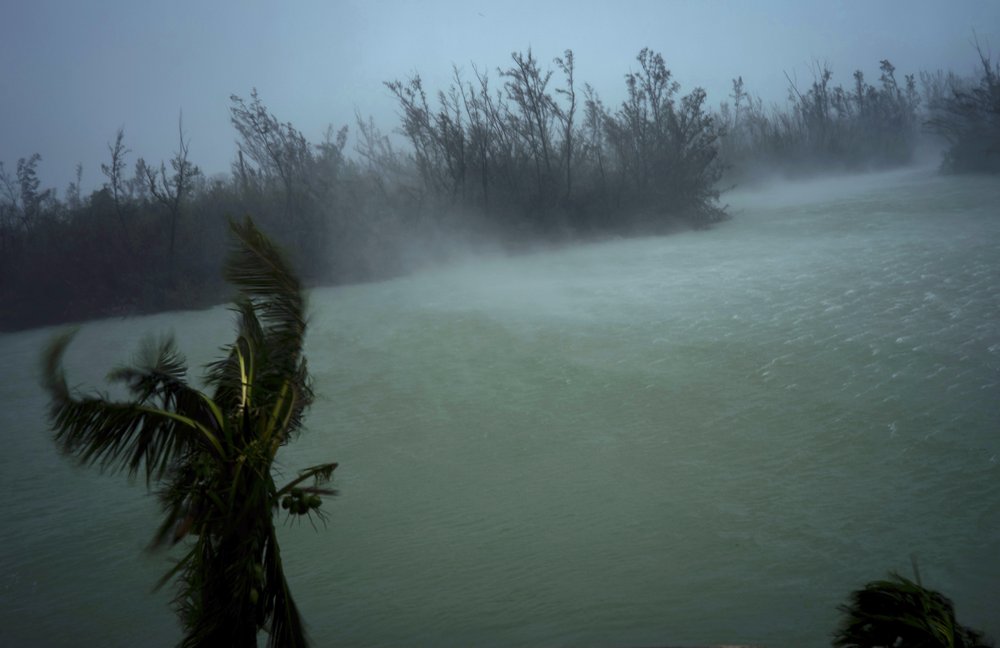 "We are in the midst of a historic tragedy," Prime Minister Hubert Minnis said. "The devastation is unprecedented and extensive."

Winds and rain continued to pound the northwest islands, sending people fleeing the floodwaters from one shelter to another.

By Tuesday morning, the storm's top sustained winds had dipped to 120 mph (193 kph), making it a Category 3 hurricane, but it remained almost stationary. It was centered 25 miles (40 kilometers) northeast of Freeport — roughly the same distance from the city as at 9 a.m. Hurricane-force winds extended out as far as 45 mph (75 kilometers) in some directions.

Hundreds of thousands of people in Florida, Georgia and South Carolina were ordered to evacuate before the storm rolls up the Eastern Seaboard, bringing the possibility of life-threatening storm-surge flooding even if the storm's heart stays offshore, as forecast. Several large airports announced closures and many flights were cancelled for Monday and Tuesday.

The U.S. Coast Guard airlifted at least 21 people injured on Abaco Island, which Dorian hit on Sunday with sustained winds of 185 mph (295 kph) and gusts up to 220 mph (355 kph), a strength matched only by the Labor Day hurricane of 1935, before storms were named. Scientists say climate change generally has been fueling more powerful and wetter storms and the only recorded storm more powerful than Dorian was Hurricane Allen in 1980, with 190 mph (305 kph) winds, though it did not make landfall at that strength.

Abaco and Grand Bahama, neither much more than 40 feet (12 meters) above sea level at their highest points, are home to some 70,000 people.

Bahamian officials said they received a "tremendous" number of calls from people in flooded homes. One radio station said it received more than 2,000 distress messages, including reports of a 5-month-old baby stranded on a roof and a woman with six grandchildren who cut a hole in a roof to escape rising floodwaters. At least two designated storm shelters flooded.

Dorian killed one person in Puerto Rico, at the start of its path through the Caribbean.

Minnis said many homes and buildings were severely damaged or destroyed, but it was too early to say how much the rebuilding effort would cost. Choppy brown floodwaters reached roofs and the top of palm trees on Monday.

Parliament member Iram Lewis told The Associated Press his greatest fear was that waters would keep rising overnight and that stranded people would lose contact with officials as cellphone batteries died.

"It is scary," he said, adding that Grand Bahama's airport was 6 feet (almost 2 meters) underwater and that people were moving shelters as floodwaters kept surging. "We're definitely in dire straits."

The U.S. National Hurricane Center said Dorian was expected to start moving slowly to the west-northwest Tuesday while continuing to pound Grand Bahama Island into the morning.

While it was expected to stay offshore, meteorologist Daniel Brown cautioned that "only a small deviation" could draw the storm's dangerous core toward land.

A National Guard official, John Anderson, said many people were complying with the evacuation orders.

"We have not seen much resistance at all," he said.