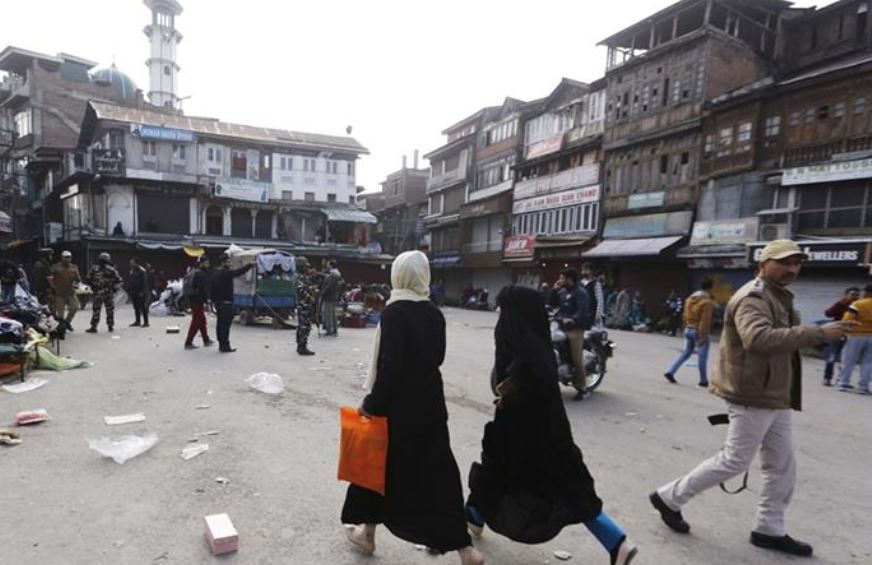 Kashmiri residents run at the site of a grenade blast in Srinagar, November 4, 2019. (Photo: CGTN)

One person was killed and at least 45 others were injured on Monday after an attacker threw a grenade at a busy market in Indian-administered Kashmir's main city of Srinagar, police and medics said.

The injured, including three members of the Indian paramilitary police, have been admitted to the hospital after the blast on Hari Singh High Street in the center of the city, said the officials, who declined to be named. One person is in critical condition, they said.

The victim was identified as a street vendor from India's Uttar Pradesh state. Police blamed the attack on insurgents as retaliation for New Delhi's stripping the disputed region of its semi-autonomous status in early August.

"The attack, targeting roadside vendors, was carried out to discourage people from returning to normal life," said Haseeb Mughal, a police official.

The Muslim-majority Kashmir valley claimed by both India and Pakistan has been in turmoil since New Delhi announced it would strip the territory of its long-held autonomy and statehood.

India shut down the internet and arrested thousands in a historic crackdown it said was aimed at preventing unrest, while militant groups fighting its rule have attacked migrant workers from other places in the country.

This is the bloodiest incident since New Delhi stripped the region of special status on August 5., and comes five days after a truck driver was shot dead in Kashmir, and a grenade injured 20 people in northwestern Sopore town.

The August decision was accompanied by a harsh crackdown, with New Delhi sending tens of thousands of additional troops to the already heavily militarized region, imposing a sweeping curfew, arresting thousands, and cutting virtually all communications.

Authorities have since eased restrictions, lifting roadblocks, and restoring landlines and some cellphone services. They have encouraged students to return to school and businesses to reopen. But Kashmiris have largely stayed home, in defiance or fear amid threats of violence.

For now, businesses in Kashmir are still largely shut. Many markets are only open for a few hours each morning. Kashmiris have quietly refused to resume their normal lives, confounding India at their own economic expense.

India accuses Pakistan of arming and training rebels who have been fighting for Kashmir's independence or its merger with Pakistan since 1989. Islamabad rejects this charge and says it only provides moral and diplomatic support.