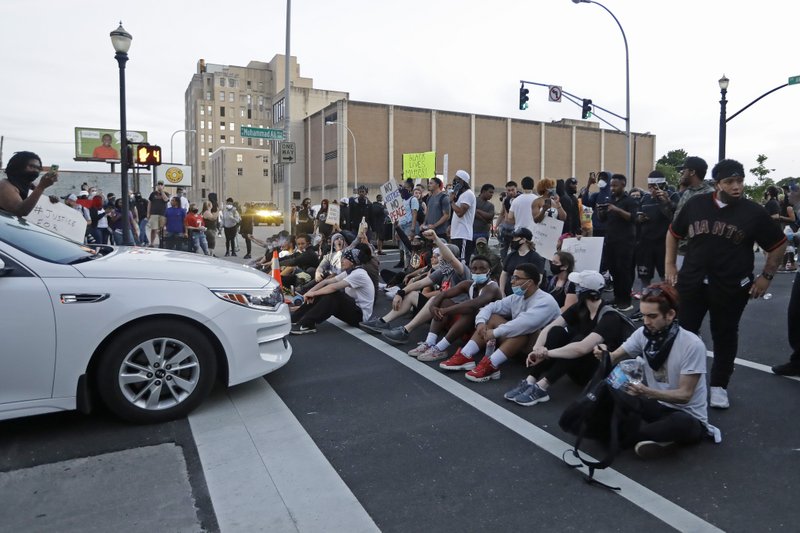 Protesters sit at an intersection during a protest over the deaths of George Floyd and Breonna Taylor, Saturday, May 30, 2020, in Louisville, Ky. Breonna Taylor, a black woman, was fatally shot by police in her home in March. (Photo: AP)

It’s the stuff of nightmares: Breonna Taylor and her boyfriend were in bed when a trio of armed men smashed through the front door. Gunfire erupted, killing the 26-year-old black woman.

The three men turned out to be plainclothes police detectives, one of whom was wounded in the chaos and violence that March night. Taylor’s death led to protests and a review of how Louisville police use “no knock” search warrants, which allow officers to enter a home without announcing their presence, often in drug cases to prevent suspects from getting rid of a stash.

Taylor’s name is one of those being chanted during nationwide protests decrying police killings of black people. The unrest began after the death of George Floyd, a black man who pleaded that he couldn’t breathe as a white Minneapolis police officer pinned him to the ground with a knee.

More than two months after Taylor’s death, Louisville Mayor Greg Fischer announced last week that the police department’s use of no-knock warrants has been suspended indefinitely. Civil rights advocates are calling for a permanent ban, though Oregon and Florida are the only states that have outlawed such warrants.

Fischer changed the policy after an outcry from Taylor’s family and they sued the department and the three officers who served the warrant. The new policy requires Louisville’s police chief to sign off on all no-knock warrants before they go to a judge.

“These changes, and more to come ... should signal that I hear the community and we will continue to make improvements anywhere that we can,” Fischer said.

The three narcotics detectives had a no-knock warrant when they busted down the door of Taylor’s apartment after midnight on March 13. They were investigating a drug dealer named Jamarcus Glover, who was arrested elsewhere the same day. Police said Glover was using Taylor’s address to receive packages they believed could be drugs. No drugs were found at her apartment.

“Simply because the police get a no-knock warrant does not mean they can’t knock and announce,” Wine said last week.

But the lawsuit filed on behalf of Taylor’s mother says neighbors didn’t hear the plainclothes detectives knock or identify themselves as officers before they crashed into the apartment.

Taylor’s boyfriend, Kenneth Walker, told investigators that he thought he was being robbed or that it might be an ex-boyfriend of Taylor’s trying to get in. Walker told police he heard knocking but didn’t know who it was. He said he and Taylor were moving toward the door when it was knocked down, so he fired a shot that hit an officer.

Authorities had charged Walker with attempted murder but dropped the case last week. Wine said he wanted to let state and federal authorities complete their review of the shooting.

Meanwhile, the American Civil Liberties Union of Kentucky has urged city leaders to ban no-knock warrants, saying they lead to the deaths of innocent people.

A 2014 ACLU report on police militarization detailed several botched SWAT team raids as no-knock warrants were served, including one that year in Georgia that ended with a toddler in a medically induced coma.

More recently, police in Montgomery County, Maryland, shot and killed 21-year-old Duncan Lemp in his family’s home while serving a no-knock search warrant. An eyewitness said Lemp was asleep in his bedroom when police opened fire from outside his house, according to an attorney for his family. Police said Lemp, who was white, was armed with a rifle and ignored commands.

Lemp family attorney Rene Sandler said police began using no-knock warrants decades ago as a tool in the nation’s war on drugs. They have become the “norm” for many kinds of criminal cases, including non-violent offenses, she said.

“It’s an abuse of authority across the board,” said Sandler, a former county prosecutor.

“If you’re going in on a drug case where the quantity is so small that they could dispose of it by flushing it down the toilet, you probably shouldn’t be there with a search warrant in the first place. It’s not worthwhile,” said Tucker, who has been an expert witness in dozens of court cases.

The number of no-knock warrants served during SWAT team deployments has grown from approximately 1,500 annually in the early 1980s to about 45,000 in 2010, according to Eastern Kentucky University professor Peter Kraska, an expert in police militarization. He said police are adept at working around restrictions and tailoring paperwork to suit the standards of judges issuing search warrants.

“Banning no-knock warrants, if any jurisdiction can pull that off, is an important step,” Kraska said. “At the end of the day, banning them probably won’t accomplish much in the real world. But getting them off the books on one level is important.”

Kentucky has a “stand your ground” law that gives residents the right to use deadly force against an intruder. Those laws generally haven’t protected people who unwittingly shoot at officers entering their homes, but Walker’s dropped charges suggests the circumstances of Taylor’s death could be an “ideologically compatible situation for the left and right,” Kraska said.

“These different groups that normally would be at odds with one another all agree on the inappropriateness of no-knock warrants,” he added. “There’s been a lot more political agreement that this is problematic.”