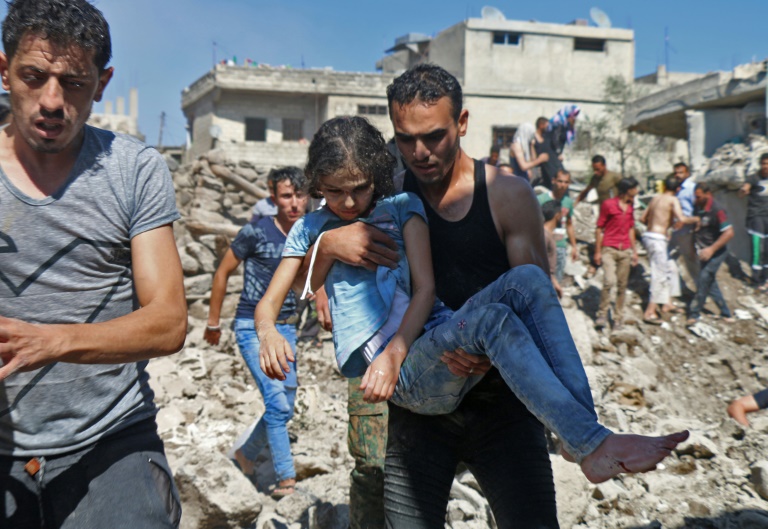 A man carries a child rescued from the rubble after Syrian and Russian air strikes on the rebel-held southern town of Nawa, on June 26, 2018.(Photo: AFP)

Deadly air strikes pounded rebel-held towns across southern Syria on Wednesday, as relief groups sounded the alarm over a Russian-backed push for the region and its main city Daraa.

The violence has already ravaged civilian infrastructure in opposition towns, with three hospitals forced to shut down because of heavy raids.

As the humanitarian situation grows increasingly dire, aid organisations from the Red Cross to UNICEF called for more to be done to prevent civilian casualties.

The south is meant to be protected by a ceasefire put in place last year by Russia, Jordan, and the United States, but President Bashar al-Assad has set his sights on retaking the area.

After a week of air strikes and artillery fire on rebel towns across Daraa province, his troops turned to the opposition-held half of the provincial capital on Tuesday.

The bombing continued into Wednesday, said the Syrian Observatory for Human Rights.

Air strikes on the south killed 10 civilians Wednesday including three infants, the Britain-based Observatory said, bringing the civilian death toll during the past week to 56.

"Horror knows no limit in Syria, where children are yet again caught in the crossfire of the latest wave of violence in the southwest," said Henrietta Fore, executive director of UN children's agency UNICEF.

"The children of Syria have lived through unacceptable suffering. This cannot become the new normal."

The International Committee of the Red Cross and CARE also called for restraint.

Rights violations committed in other areas seized from rebels in recent years were being repeated, he said.

"What we have seen in Aleppo, northern rural Homs, and Eastern Ghouta, is happening now in the south, where cities and towns are bombed daily, people are being uprooted and lack basic human necessities, such as water and shelter," said Schaap.

"We want to stress to all warring parties that international humanitarian law requires them to protect civilian infrastructure, in particular schools and hospitals," he added.

The offensive has already forced shut a total of five hospitals in the last week, said the Observatory.

Three closed down overnight, it said, after heavy air strikes including by Russian warplanes on the rebel-held towns of Saida, Al-Mseifra and Al-Jiza.

Syria has become infamous for attacks on health workers, with more facilities hit so far this year than all of 2017.

Doctors Without Borders (MSF) said the southern offensive would only make things worse.

"The escalation of the conflict in southern Syria will only deteriorate the situation for a population that barely had access to healthcare in the past years," MSF's Gemma Dominguez told AFP Wednesday.

Rebels held a horseshoe-shaped band of territory in the south, and government troops have already isolated one end of it by capturing two strategic villages.

In that encircled zone, around 1,000 people had "regularised" their status with the government, said state news agency SANA, including several hundred rebels who laid down their arms.

But in the nearby town of Al-Nahta, captured Wednesday by the regime, rebels appeared to be resisting. A car bomb killed 12 regime forces there Wednesday afternoon, the Observatory said.

Among them is Ahmad Abazeid, who fled the battered town Herak in Daraa's eastern countryside to a nearby village.

"But the warplanes are following them wherever they go."

The Norwegian Refugee Council appealed to Amman on Wednesday to grant asylum to those fleeing now.

"Jordan has done so much over the years to accommodate hundreds of thousands of refugees from Syria, but unfortunately the international community must rely on it to be generous once more," said NRC's Youri Saadallah.

Omar al-Hariri, an activist in Daraa, said Jordan's closed borders meant those fleeing would head towards the Israeli-occupied Golan.

"Displaced people have nowhere safe to go, except heading towards the border with the Golan, where the tents are packed and unable to absorb more people," Hariri told AFP.

To avoid greater bloodshed, Russia is leading talks with Syria, Jordan, Israel and the United States on a negotiated settlement, but so far there has been no public progress.