WORLD Deadly unrest in Iran after Rouhani calls for calm

Deadly unrest in Iran after Rouhani calls for calm 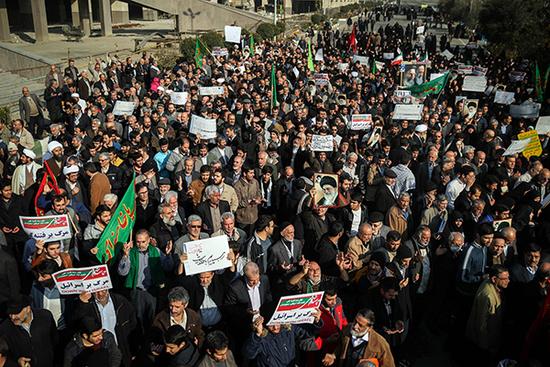 Ten people were killed overnight in the worst violence yet seen in Iran's protests, local media reported Monday, as President Hassan Rouhani played down the unrest and vowed those breaking the law would be dealt with.

Sunday night was the deadliest since the angry demonstrations broke out on Thursday and spread across the country in the biggest test for the government since mass protests in 2009.

Six people were killed in the western town of Tuyserkan after shots were fired, state television reported, while a local lawmaker said two people had been shot dead in the southwestern town of Izeh.

Two others, included a teenage boy, were run down and killed by a fire engine stolen by protesters in the western town of Dorud, the state broadcaster said.

"Criticism and protest are an opportunity not a threat," he said in a statement on the presidency website, adding that the Iranian people would "respond to the rioters and lawbreakers".

"Our nation will deal with this minority who chant slogans against the law and people's wishes, and insult the sanctities and values of the revolution."

Pro-government rallies were held across several towns and cities, but videos on social media showed seemingly widespread anti-government protests in cities including Kermanshah, Khorramabad and Shahinshahr.

A school for clergy and government buildings were torched in the northwestern town of Takestan and videos showed police using tear gas and water cannon to disperse a small protest in Tehran's Enghelab Square on Sunday evening.

The authorities did not give details on who was responsible for the fatal shootings.

'Country must have discipline'

The authorities have confirmed more than 400 people were arrested since the outbreak of the unrest, of which around 100 have been freed.

"Those who have rightful demands must be guided in lawful ways and those who riot and commit sabotage and chaos and set fire to public property... must be confronted decisively," he told the state broadcaster.

"The country must have discipline," Larijani added.

Verifying rumors and videos remained challenging due to travel restrictions and sporadic blocks on mobile internet and popular social media sites including Telegram and Instagram.

The protests began as demonstrations against economic conditions in second city Mashhad on Thursday but quickly turned against the Islamic government as a whole.

State media began showing some footage of the demonstrations on Sunday, focusing on young men attacking banks and vehicles, an attack on a town hall in Tehran, and images of a man burning the Iranian flag.

Rouhani came to power in 2013 promising to mend the economy and ease social tensions, but high living costs and a 12 percent unemployment rate have left many feeling that progress is too slow.

"We have no problem bigger than unemployment. Our economy needs an operation. We must all stand together," Rouhani said on Monday.

The authorities have blamed external forces for fomenting violence, saying the majority of social media reports were emanating from regional rival Saudi Arabia or exile groups based in Europe.