Deal seems near on $2T Biden package, though deadline slips

A deal within reach, President Joe Biden and Congress' top Democrats edged close to sealing their giant domestic legislation Friday, though the day's informal deadline appeared to slip as they worked to scale back the measure and determine how to pay for it. 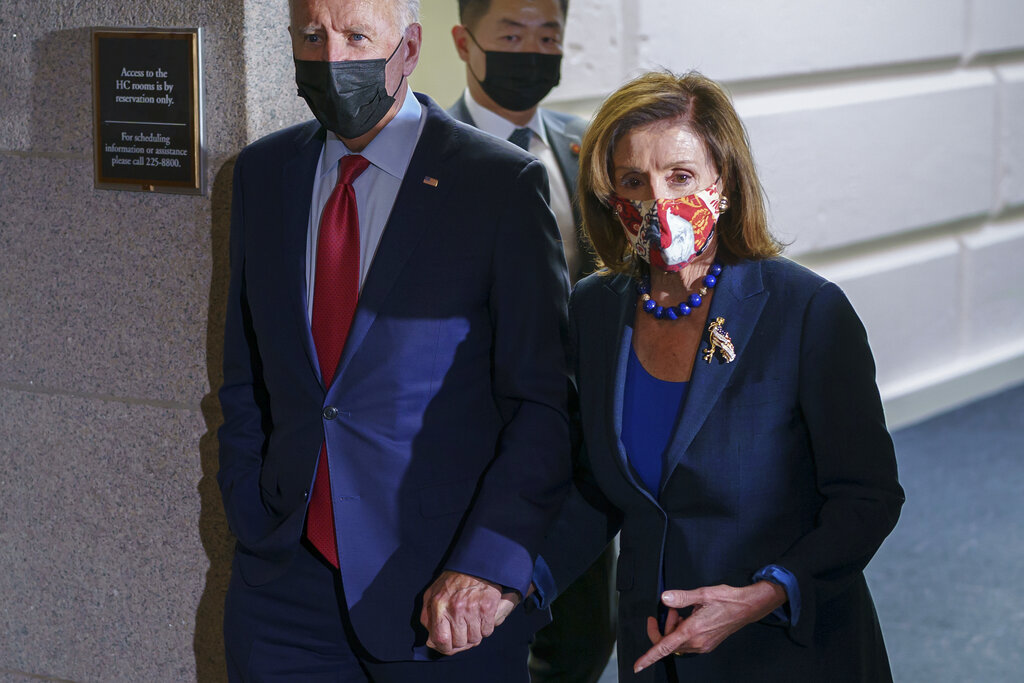 In this Oct. 1, 2021 photo, President Joe Biden and Speaker of the House Nancy Pelosi, D-Calif., walk in a basement hallway of the Capitol after meeting with House Democrats, on Capitol Hill in Washington. (Photo: AP)

Negotiations were expected to continue into the weekend, all sides indicating just a few issues remained unsettled in the sweeping package of social services and climate change strategies.

Biden met at the White House Friday with House Speaker Nancy Pelosi, and Senate Majority Leader Chuck Schumer joined by video call from from New York, trying to shore up details. The leaders have been working with party moderates and progressives to shrink the once-$3.5 trillion, 10-year package to around $2 trillion in child care, health care and clean energy programs.

She told reporters back at the Capitol that more than 90% of the package was agreed to: The climate change components of the bill "are resolved," but outstanding questions remained on health care provisions.

Vice President Kamala Harris sounded even more certain. On a visit to New York City, she said that tensions often rise over final details but "I am confident, frankly -- not only optimistic, but I am confident that we will reach a deal."

No agreement was announced by Friday's self-imposed deadline to at least agree on a basic outline. Biden wants a deal before he leaves next week for global summits in Europe.

Pelosi hoped the House could start voting as soon as next week, but no schedule was set.

Sticking points appear to include proposed corporate tax hikes to help finance the plan and an effort to lower prescription drug costs that has raised concerns from the pharmaceutical industry. Democrats are in search of a broad compromise between the party's progressives and moderates on the measure's price tag, revenue sources and basic components.

At the White House, the president has "rolled up his sleeves and is deep in the details of spreadsheets and numbers," press secretary Jen Psaki said.

Biden was to spend the weekend at his home in Wilmington, Delaware.

Psaki compared the work to starting Social Security and other major federal programs decades ago, and then building on them in following years.

"Progress here is a historic package that will put in place systems and programs that have never existed in our society before," she said, noting the effort to expand child care and provide free pre-kindergarten for all youngsters.

Negotiations are proceeding as Biden more forcefully appeals to the American public, including in a televised town hall, for what he says are the middle-class values at the heart of his proposal.

In a Senate that is evenly divided between the Democrats and firmly opposed Republicans, Biden can't afford to lose a single vote. He is navigating his own party's factions — progressives, who want major investments in social services, and centrists, who prefer to see the overall price tag go down.

"When you're president of the United States, you have 50 Democrats — every one is a president. Every single one. So you gotta work things out," he said during a CNN town hall Thursday.

Still, he expressed optimism about the process. "It's all about compromise. Compromise has become a dirty word, but bipartisanship and compromise still has to be possible," he said.

On one issue — the taxes to pay for the package — the White House idea seemed to be making headway with a new strategy of abandoning plans for reversing Trump-era tax cuts in favor of an approach that would involve imposing a 15% corporate minimum tax and also taxing the investment incomes of billionaires to help finance the deal.

Biden has faced resistance from key holdouts, in particular Sen. Kyrsten Sinema, D-Ariz., who has not been on board with her party's plan to undo President Donald Trump's tax breaks for big corporations and individuals earning more than $400,000 a year.

The president was unusually forthcoming Thursday night about the sticking points in the negotiations with Sinema and another Democrat, conservative Sen. Joe Manchin of West Virginia.

While the president said Sinema opposed raising "a single penny in taxes" on the wealthy or corporations, a White House official later clarified that the president was referring to raising the top tax rates, not the range of tax proposals "which Sen. Sinema supports."

If so, that could unlock a key piece of a deal. With a better understanding of the revenues available, Democrats can then develop a topline amount of spending for the package, and adjust the duration and sums for various programs accordingly.

Biden said Manchin doesn’t want to "rush" the transition to clean energy so quickly it will result in major job losses in his coal-producing state.

Even still, Biden acknowledged major reductions to his original vision.

He signaled the final plan would no longer provide free community college, but said he hoped to increase Pell Grants to compensate for the loss of the policy.

He also said that what had been envisioned as a federally paid, months-long family leave program would be just four weeks.

Another work in progress — the idea of expanding Medicare to include dental, vision and hearing aid benefits for seniors, is a priority for Sen. Bernie Sanders, the independent of Vermont.

Biden said he likes the idea, but with Manchin and Sinema objecting, the proposal is "a reach."

Instead, Democrats, he said are considering offering seniors an $800 voucher to access dental care as well as another program for hearing aids that Sinema may support. However, the vision care component, Biden said, has been harder to resolve and there is no consensus yet.

Overall, Biden and his party are trying to shore up middle-class households, tackle climate change and have the most wealthy Americans and corporations pay what he calls their "fair share" for the nation.

In the mix are at least $500 billion in clean energy tax credits and other efforts to battle climate change, $350 billion for child care subsidies and free prekindergarten, an extension of the $300 monthly child tax credit put in place during the COVID-19 crisis, and money for health care provided through the Affordable Care Act.

The newly proposed tax provisions, though, have rankled Democrats who have long campaigned on scrapping the Republican-backed tax cuts that many believe unduly reward the wealthy and cost the government untold sums in lost revenue at a time of gaping income inequality. Many are furious that perhaps a lone senator could stymie that goal.

However, the White House is reviving the idea of a corporate minimum tax rate that would hit even companies that say they had no taxable income — a frequent target of Biden, who complains they pay "zero" in taxes.

The new tax on the wealthiest individuals would be modeled on legislation from Sen. Ron Wyden, D-Ore., chairman of the Senate Finance Committee. He has proposed taxing stock gains of people with more than $1 billion in assets — fewer than 1,000 Americans.