It seemed like Billy Joe Driver, 84, was always around in this Alabama city after 36 years as mayor. 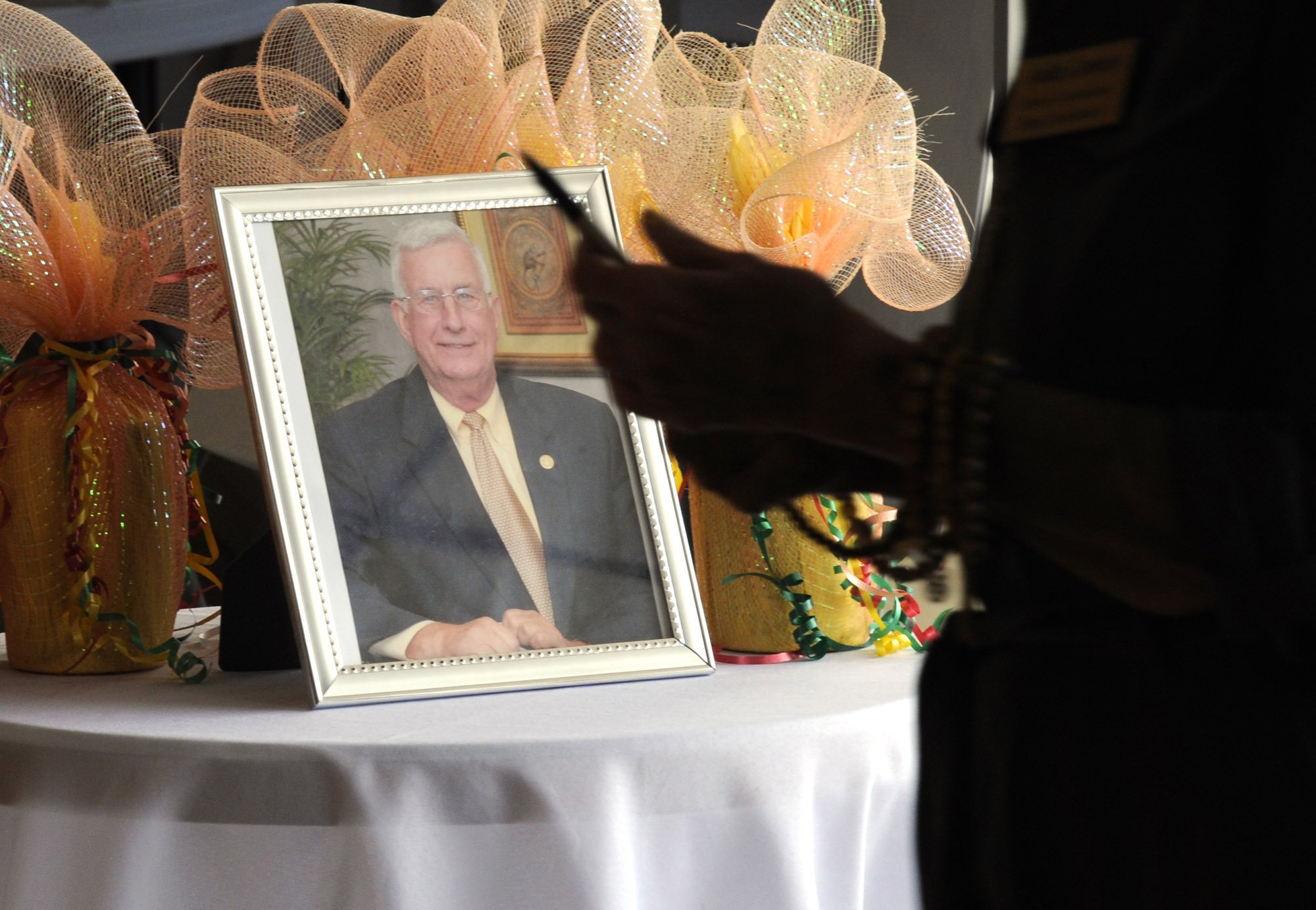 A person entering a memorial service for Mayor Billy Joe Driver in Clanton, Ala., walks past a photo of the longtime public official on Friday, Aug. 28, 2020. (Photo: AP)

Most weekdays you'd find Driver working at a first-floor conference table at Clanton City Hall, and many nights he'd eat at Green's Small Town Diner with friends. On Fridays it was lunch at the local senior center, and Wednesday night and Sunday meant worship at his church, Temple Assembly of God.

All that visibility meant people noticed when Driver disappeared from public in June, and friends bowed in prayer when word got out he was sick with what many had assumed was a big-city disease, COVID-19. Driver died of the illness in July, forcing a reckoning that's still rippling through the community.

The new coronavirus is just as dangerous in central Alabama as in New York City, people now know, and older folks who were close to Driver look askance these days at others who flout Alabama's mandatory mask rule in stores or at high school football games. Many are staying home more than they did early in the pandemic.

Losing the best-known person in town to a disease that had seemed so distant was a wake-up call for Clanton, friend Sammy Wyatt said.

"People had gotten lax on trying to protect everyone else. They weren't wearing their masks like they ought to," she said. "I think with Mayor Driver's death, it opened people's eyes and they realized, 'I could be next with this."'

"We were taking it serious before, but after that, it really shook us to the core," said McKinney, who runs Chilton Senior Connections, the senior center that Driver helped create in an old store and visited regularly.

Located halfway between Birmingham and Montgomery, Clanton is a city of about 8,800 people that's best-known for agriculture — its exit off Interstate 65 is marked by a water tower shaped like a giant peach. Conservative to the core, churches are at the heart of the community, where many spend their whole lives.

Driver joined the volunteer fire department and was elected to Clanton City Council, where he spent 12 years, before running for mayor and winning on his first try in 1984. He never lost a bid for reelection and lived on a shady street in the same small house he bought as a teen after getting that first job.

Driver was "just city, and that's it," said his brother.

"You'd see him out riding at night hunting something, and if they had any kind of problem, he'd be out there with them at night," Driver said.

No one is positive how Driver was infected with the new coronavirus that causes COVID-19 — it could have been at a city meeting — but he began feeling badly around Father's Day weekend in June, said daughter Kim Driver Hayes, who lived next door to her dad with her husband.

Hospitalized in Clanton and his condition worsening, Driver got his daughter to help him call City Council members, his pastor, a city supervisor, and others — 12 people in all — to say goodbye by phone before he was transferred to a hospital in Birmingham to be put on a ventilator.

"He was just telling them thank you and that he loved them," she said. "The last thing he said to them was, 'I'll see you in heaven. Be ready to go.'"

Hayes, who's a nurse, was herself sick with a milder case of COVID-19 by then; she believes she got it days earlier while helping her father work on a door. More than a half-dozen relatives caught it in all, including the mayor's brother, Don, who is still recovering.

The mayor didn't get better and died on July 9.

"I got to see him about 30 minutes before he passed away," Hayes said. "It was the worst time of my life."

City Councilman Bobby Cook gathered city workers together and announced the death of his longtime friend with tears in his eyes. The Clanton Fire Department informed townspeople what had happened in a message on its Facebook page.

A few days later, mourners huddled around a green tent for a brief graveside service, but something more was needed to acknowledge the man who, for many, was the heart of Clanton. So about 60 people, all wearing masks and with sanitized hands, gathered last Friday for a memorial service at the senior center where he liked to eat lunch.

With mourners' chairs spread apart and paper peaches hanging overhead, Cook got up to speak. He's the interim mayor until a newly elected mayor, Jeff Mims, takes over in November.

Cook recalled the way Driver would often hear out a citizen's request for help, perhaps say he couldn't do something, then add: "'Let me see what I can do."' More often than not, Cook said, Driver came through.

"The man had more in his head about what was going on in the city than you could write in a book," Cook said. "He was an honest guy."