WORLD Death of Queen Elizabeth II: What happens next?

Death of Queen Elizabeth II: What happens next? As preparations build for next week's state funeral, the royal family on Wednesday will walk behind the queen's coffin in a procession through central London, after which thousands of members of the public are expected to come to pay their final respects at her lying in state.

Here is how the United Kingdom plans to say goodbye to Queen Elizabeth II.

Starting at 13:22 GMT, the king leads the procession behind the gun carriage carrying the queen's coffin from Buckingham Palace to parliament's Westminster Hall, joined by senior members of the royal family.

A gun salute in Hyde Park fires 38 shots at one-minute intervals during the procession. Big Ben also tolls every 60 seconds. Hyde Park also has a big screen showing the events.

Charles' sons, Princes William and Harry, his sister Princess Anne, and brothers Princes Andrew and Edward, walk with him, while others including William's wife Kate and Harry's wife Meghan travel by car.

The coffin arrives at 3:00 pm precisely and is placed on a catafalque, a raised platform.

During the lying-in-state, another "Vigil of the Princes" involving the king and the queen's three other children plus other senior royals takes place.

Archbishop of Canterbury Justin Welby conducts a short service after the coffin arrives, attended by the king.

The queen lies in state until the funeral, with huge crowds expected as members of the public pay their respects.

Westminster Hall is open for 24 hours a day, starting at 5:00 pm on Wednesday and ending at 6:30 am on Monday.

The government warned people the line to view the queen in her coffin was "expected to be very long" and "you will need to stand for many hours, possibly overnight, with very little opportunity to sit down".

The line to get into Westminster Hall is to stretch over Lambeth Bridge and follow the River Thames into southeast London, passing landmarks such as the Tate Modern museum, according to the government's route map.

Charles and Camilla visit Wales where a service is held at Cardiff's Llandaff Cathedral and he receives a message of condolence at the Senedd, the Welsh national assembly building.

The visit to Wales completes trips to all four nations that make up the United Kingdom.

At 8:00 pm a minute's silence will be observed nationwide to mourn the queen and honour her life of service to the country.

The queen's coffin is taken in procession to Westminster Abbey for a state funeral at 11:00 am expected to be watched by millions around the world. 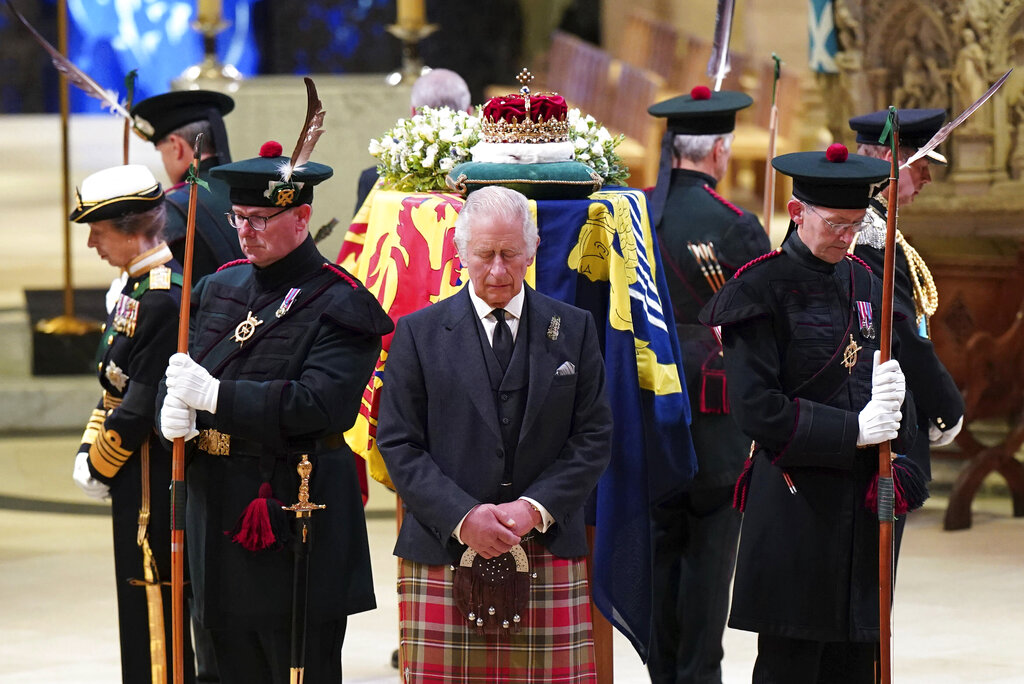 Political leaders and heads of state including US President Joe Biden are expected to attend, sparking a major security operation.

After the funeral, the coffin is taken to Windsor, for a televised committal service at St George's Chapel, with a private interment planned for later in the evening.

The queen will be interred at the King George VI memorial chapel, alongside her husband, Prince Philip, the ashes of her sister Princess Margaret, their mother, also called Elizabeth, and father, George VI.