A US court of appeals on Wednesday upheld the death sentence of Dylann Roof, the white shooter convicted of killing nine black worshipers at a South Carolina church in 2015. 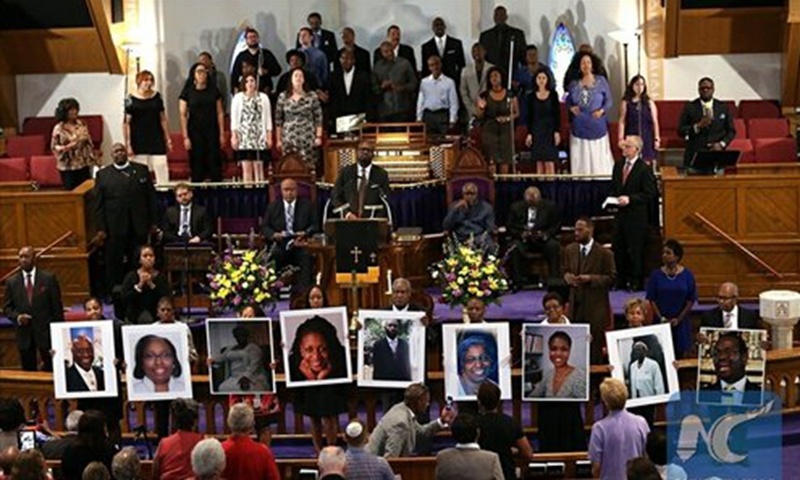 Photographs of the nine victims killed at the Emanuel African Methodist Episcopal Church in Charleston, South Carolina are held up by congregants during a prayer vigil at the Metropolitan AME Church June 19, 2015 in Washington, DC. Photo: Xinhua/AFP PHOTO

Armed with a .45-caliber pistol, Roof fired 77 rounds in his shooting spree at the historic Mother Emanuel African Methodist Episcopal Church in Charleston on June 17, 2015.

Roof, who was 21 at the time, "murdered African-Americans at their church, during their Bible-study and worship. They had welcomed him. He slaughtered them," read the court's ruling in part.

Roof, now 27, is not at risk of execution in the short term as US President Joe Biden's administration has imposed a moratorium on federal executions.

As stated in a racist manifesto, Roof's goal was "to foment racial division and strife" across the country.

"No cold record or careful parsing of statutes and precedents can capture the full horror of what Roof did. His crimes qualify him for the harshest penalty that a just society can impose," the ruling read.

The Mother Emmanuel AME Church massacre "is one of the worst events in not only South Carolina's history but also our nation's history," said Nathan Williams, one of the lead prosecutors on the case at the US attorney's office in South Carolina.

Roof was sentenced in early 2017 without having expressed regret or apologies.

His lawyers appealed the conviction on grounds that Roof should not have represented himself in the trial - an argument that failed to convince the appeals court.