RIO DE JANEIRO, Feb. 6 (Xinhua) - The death toll from the collapse of a tailings dam in Brumadinho in Brazil's southeastern state of Minas Gerais climbed to 150 on Wednesday, the national civil defense agency said. 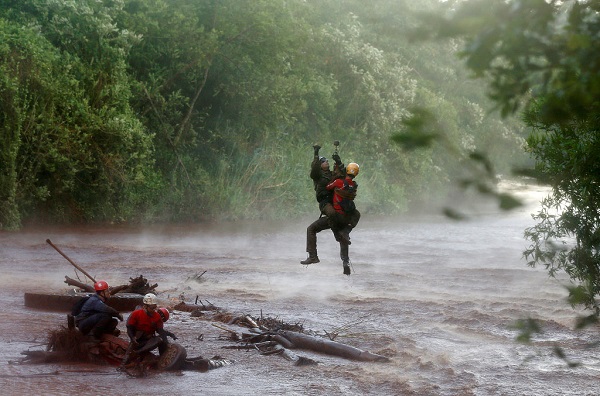 A soldier helps a member of a rescue team on Paraopeba River as they search for victims of a collapsed tailings dam owned by Brazilian mining company Vale SA, in Brumadinho, Brazil February 5, 2019. (Photo: VCG)

Another 182 people have been reportedly missing since the tailings dam owned by mining giant Vale collapsed on Jan. 25, burying entire neighborhoods in the town under meters of toxic mud.

More than 400 rescue workers were continuing to slog through the mud in search of victims, though there were little hope of finding survivors at the moment. Workers began using heavy excavation machinery to dig through the mud.

Most of the victims were Vale employees.

Five people who had been arrested for their role in validating the safety of the dam just months before it collapsed were released Tuesday pending further investigation.