Death toll from Indonesia tsunami rises to 222, and over 800 people were injured, said officials on Sunday. The tsunami following a volcano eruption slammed without warning into popular beaches around Indonesia's Sunda Strait on Saturday night, cutting a swathe of destruction and triggering mass panic as it swept inland.

Hundreds of buildings were destroyed by the wave, which hit the coast of southern Sumatra and the western tip of Java about 9:30 pm (1430 GMT) following the eruption of a volcano known as the "child" of the legendary Krakatoa, national disaster agency spokesman Sutopo Purwo Nugroho said.

Search and rescue teams were scouring rubble for survivors, with 168 confirmed dead, 745 people injured and 30 reported missing across three regions, he said.

Dramatic video posted on social media showed a wall of water suddenly crashing into an open-air concert by pop group "Seventeen" -- hurling band members off the stage and then flooding into the audience.

In a tearful Instagram post, frontman Riefian Fajarsyah said the band's bassist and road manager had been killed.

Images of the aftermath of the tsunami in coastal areas show a trail of uprooted trees and debris strewn across beaches. A tangled mess of corrugated steel roofing, timber and rubble was dragged inland at Carita beach, a popular day-tripping spot on the west coast of Java.

Muhammad Bintang, who was at Carita beach when the wave hit, described a sudden surge of water that plunged the tourist spot into darkness.

"We arrived at 9pm for our holiday and suddenly the water came -- it went dark, the electricity is off," the 15-year-old told AFP.

"It's messy outside and we still cannot access the road."

In Lampung province, on the other side of the strait, Lutfi Al Rasyid said he fled the beach in Kalianda city in fear for his life.

"I could not start my motorbike so I left it and I ran... I just prayed and ran as far as I could," the 23-year-old told AFP. 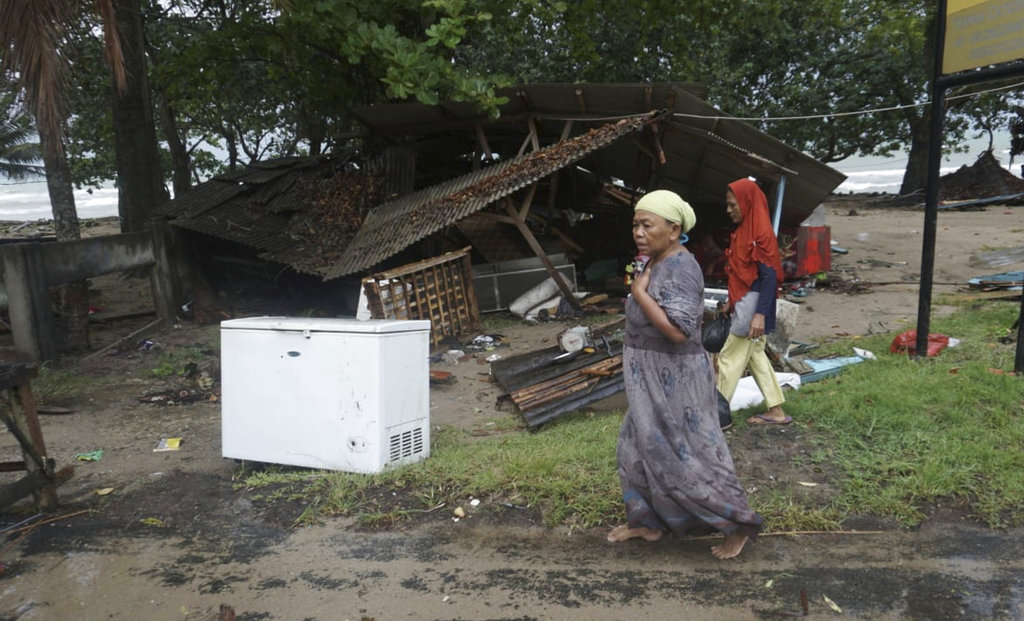 Authorities say the tsunami may have been triggered by an abnormal tidal surge due to a new moon and an underwater landslide following the eruption of Anak Krakatoa, which forms a small island in the Sunda Strait between Java and Sumatra.

"The combination caused a sudden tsunami that hit the coast," Nugroho said, but added that Indonesia's geological agency was working to ascertain exactly how it happened.

He added that the death toll would likely increase. 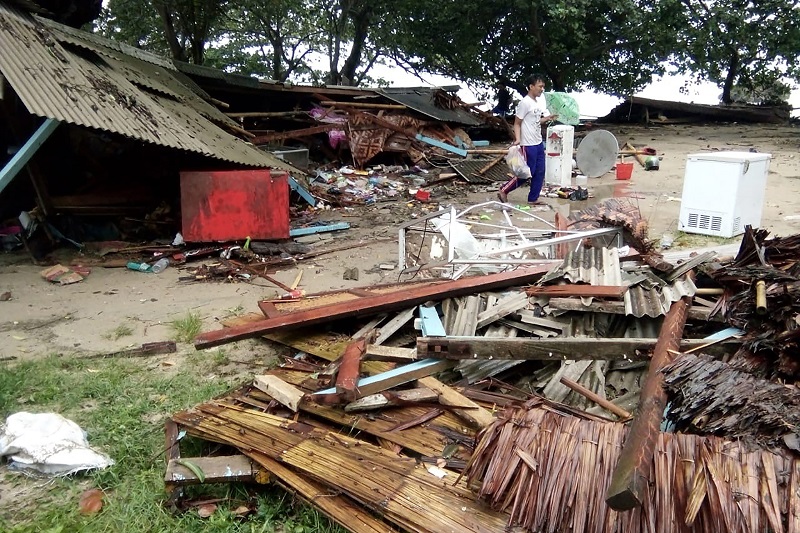 A man looks for salvageable items from a damaged home on Carita beach on December 23, 2018, after the area was hit by a tsunami that may have been caused by the Anak Krakatoa volcano. (Photos: AFP)

Indonesian authorities initially claimed the wave was not a tsunami, but instead a tidal surge and urged the public not to panic.

Nugroho later apologised for the mistake on Twitter, saying because there was no earthquake it had been difficult to ascertain the cause of the incident early on.

"If there is an initial error we're sorry," he wrote. 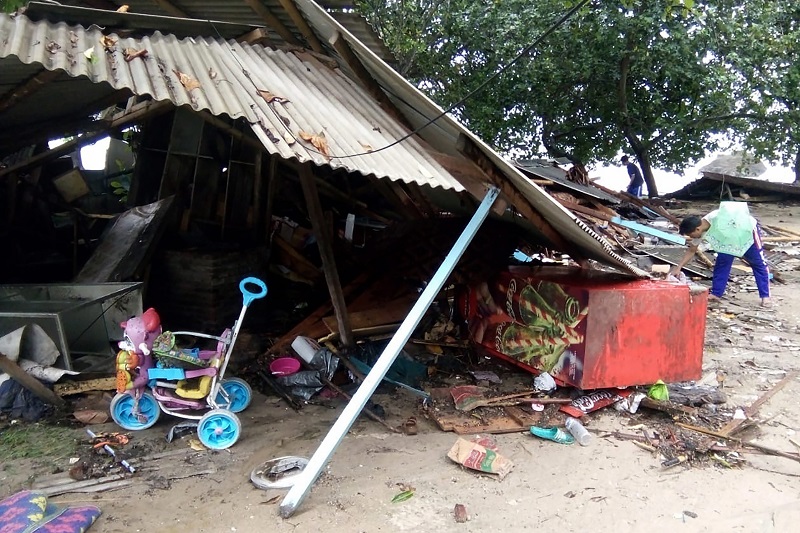 People look for salvageable items from a damaged home on Carita beach on December 23, 2018, after the area was hit by a tsunami that may have been caused by the Anak Krakatoa volcano.

The wave swamped parts of the coast around the Sunda Strait, but was most damaging in Pandeglang district, on Java's western tip, where at least 33 people died and 491 people were injured.

Heavy equipment was being transported to badly-hit areas to help search for victims, Nugroho said, adding evacuation posts and public kitchens were being set up for evacuees.

"We evacuated the victims who died and were injured, we took them to health clinics ... Most of them suffered from broken bones," he said, adding he feared more were missing.

Although relatively rare, submarine volcanic eruptions can cause tsunamis due to the sudden displacement of water or slope failure, according to the International Tsunami Information Centre.

Anak Krakatoa is a small volcanic island that emerged from the ocean half a century after Krakatoa's deadly 1883 eruption which killed more than 36,000 people.

According to Indonesia's geological agency, Anak Krakatoa had been showing signs of heightened activity for days, spewing plumes of ash thousands of metres into the air.

The volcano erupted again just after 9:00 pm on Saturday, the agency said.

An eruption just before 4:00 pm on Saturday lasted around 13 minutes and sent plumes of ash soaring hundreds of metres into the sky.

Indonesia, one of the most disaster-prone nations on earth, straddles the so-called Pacific "Ring of Fire", where tectonic plates collide and a large portion of the world's volcanic eruptions and earthquakes occur.

Most recently in the city of Palu on Sulawesi island a quake and tsunami in September killed thousands of people.

On December 26, 2004 a tsunami triggered by a magnitude 9.3 undersea earthquake off the coast of Sumatra in western Indonesia killed 220,000 people in countries around the Indian Ocean, including 168,000 in Indonesia.

Anak Krakatoa is one of 127 active volcanoes which run the length of the archipelago.

Cover image: Debris is seen on a road in Carita on December 23, 2018, after the area was hit by a tsunami on December 22 following an eruption of the Anak Krakatoa volcano. (Photo: AFP)