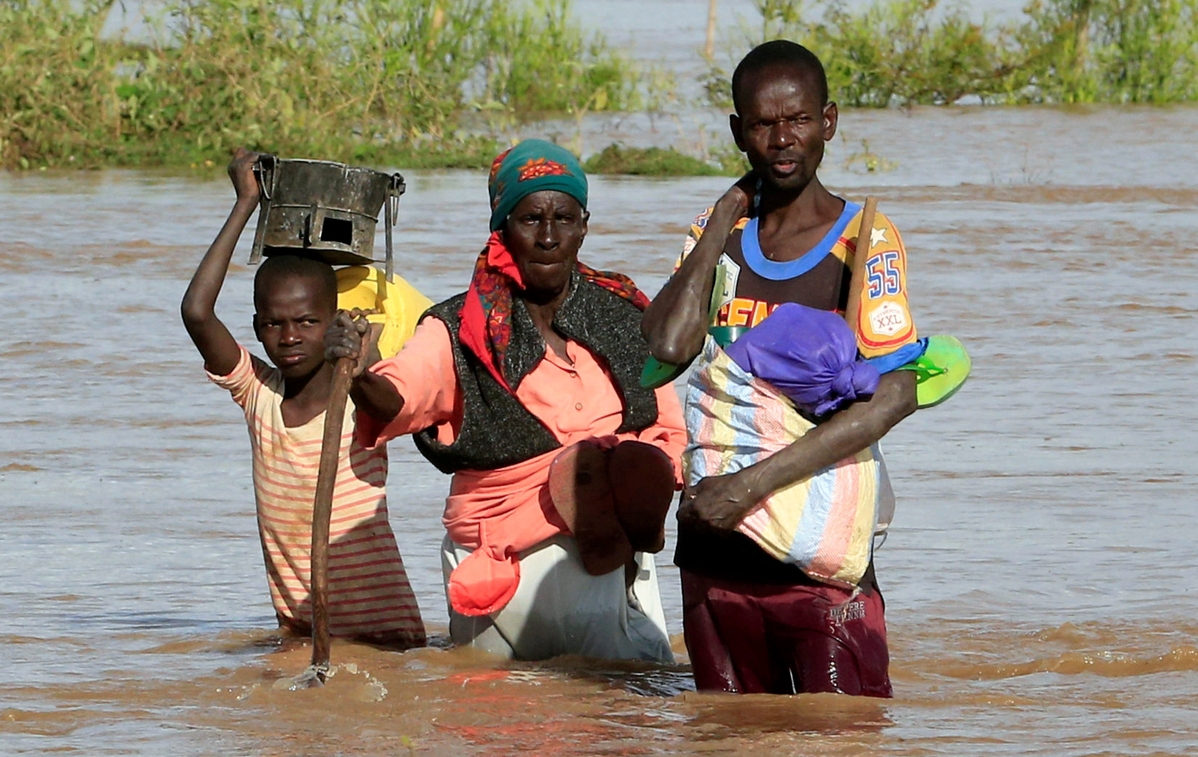 Residents wade through the waters that flooded their home in Budalangi in western Kenya on Sunday. Heavy rainfall was compounded by backflow from Lake Victoria. (Photo: AFP)

Floods and landslides caused by torrential rains have killed almost 200 people and displaced more than 100,000 in western Kenya in recent weeks, government officials said on Wednesday.

"At least 194 Kenyans have been killed by the floods brought about by the heavy rains in the last three weeks," said Cyrus Oguna, a Kenyan government spokesman, while adding the figure for those forced from their homes.

"The government will continue to give food donations and essential items to those affected by the floods in the country."

The Kenya Meteorological Department's most recent forecast is for the heavy rains that began building up in mid-April to continue in the hard-hit areas over the coming weeks.

In the country's west, residents of Budalangi and Nyando have had to ferry their belongings from submerged houses after the Nzoia and Nyando rivers burst their banks and flooded vast areas.

Oguna urged Kenyans living near dams and riverbanks to move to higher ground in order for Kenya to avoid further deaths from the flooding.

"The Turkwel Gorge Dam and Masinga Dam have filled to maximum capacity, for the first time, and the overflow of water will affect those along the Garissa River and the Tana River," Oguna said.

"Residents in these areas should move to safer ground. The government will evict those Tana and Garissa residents who refuse to move to higher ground as the floods wreak havoc in these areas."

Energy Minister Charles Keter said the levels at the two big dams were at unprecedented highs. The dams have a combined installed electricity generation capacity of 140 megawatts, representing about 6 percent of Kenya's total installed capacity.

"We are telling people who are downstream from the Garissa River all the way to the Tana River that things are worsening. We are asking them to move and they should not wait for the water to come, because the scale is historic," Keter said.

Oguna said the national government is providing food and water to the displaced and has told the health ministry to provide them with masks as a safety measure during the coronavirus pandemic.

"The government has established 25 temporary camps across the country to accommodate the displaced persons due to flood-related issues," he said. "There is also a continuous supply of potable water to certain affected communities and displaced individuals.

"We will continue the delivery of medical supplies and other nonfood items by our emergency medical teams to the affected communities."

Kenya's Ministry of Water and Irrigation said the floods have destroyed over 3,200 hectares of rice crops, a staple in the affected areas.