Death toll from migrants found in truck in Texas reaches 50 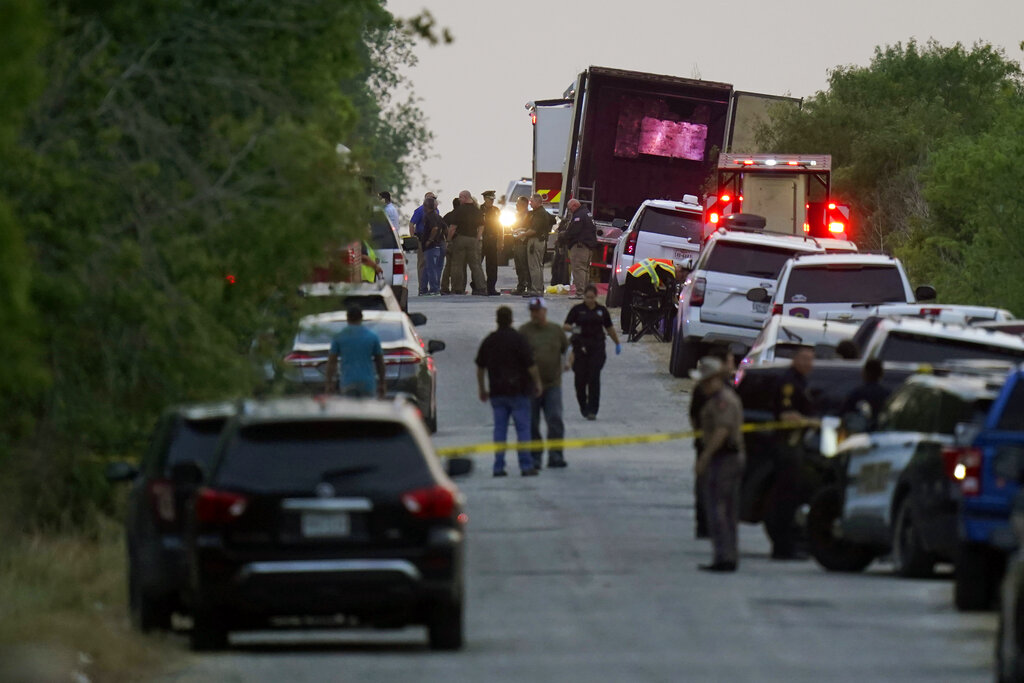 Police and other first responders work the scene where officials say dozens of people have been found dead and multiple others were taken to hospitals with heat-related illnesses after a semitrailer containing suspected migrants was found, Monday, June 27, 2022, in San Antonio. (Photo: AP)

The death toll from a human trafficking incident on Monday in which migrants suffered under extreme Texas heat inside a truck rose to 50 on Tuesday, Mexican President Andres Manuel Lopez Obrador said.

The migrants died inside a tractor-trailer in San Antonio, Texas, where temperatures swelled to a high of 103 degrees Fahrenheit (39.4 degrees Celsius). It was one of the worst disasters involving migrants in the United States in recent years, and comes five years after a similar deadly incident in the same central Texas city, a few hours from the Mexican border.

Some 22 Mexicans, seven Guatemalans and two Hondurans were identified among the dead, Mexico Foreign Minister Marcelo Ebrard said on Twitter on Tuesday. There was no information on the nationality of the other 19, Mexican officials said.

The U.S. Immigration and Customs Enforcement (ICE) said that its Homeland Security Investigations division was conducting a criminal investigation into "an alleged human smuggling event" in coordination with local police.

Sixteen people had been transported to hospitals alive and conscious, including four minors, but no children were among the dead, the San Antonio Fire Department said.

The city's police chief, William McManus, on Monday said a person who works in a nearby building heard a cry for help and came out to investigate. The worker found the trailer doors partially opened and looked inside and found a number of dead bodies.

McManus said this was the largest incident of its kind in the city and said three people were in custody following the incident, although their involvement was not clear.

"The people that are responsible for subjecting other people to these conditions should be prosecuted to the fullest extent of the law," San Antonio Mayor Ron Nirenberg said during an interview on CNN on Tuesday.

The deaths once again highlight the challenge of controlling migrant crossings at the U.S.-Mexico border, which have reached record highs.

Lopez Obrador on Tuesday said he will meet with U.S. President Joe Biden in Washington on July 12 to discuss migration.

The I-35 highway near where the truck was found runs through San Antonio from the Mexican border and is a popular smuggling corridor because of the large volume of truck traffic, according to Jack Staton, a former senior official with ICE's investigative unit who retired in December.

In July 2017, 10 migrants died after being transported in a tractor-trailer that was discovered by San Antonio police in a Wal-Mart parking lot. The driver, James Matthew Bradley, Jr., was sentenced the following year to life in prison for his role in the smuggling operation.