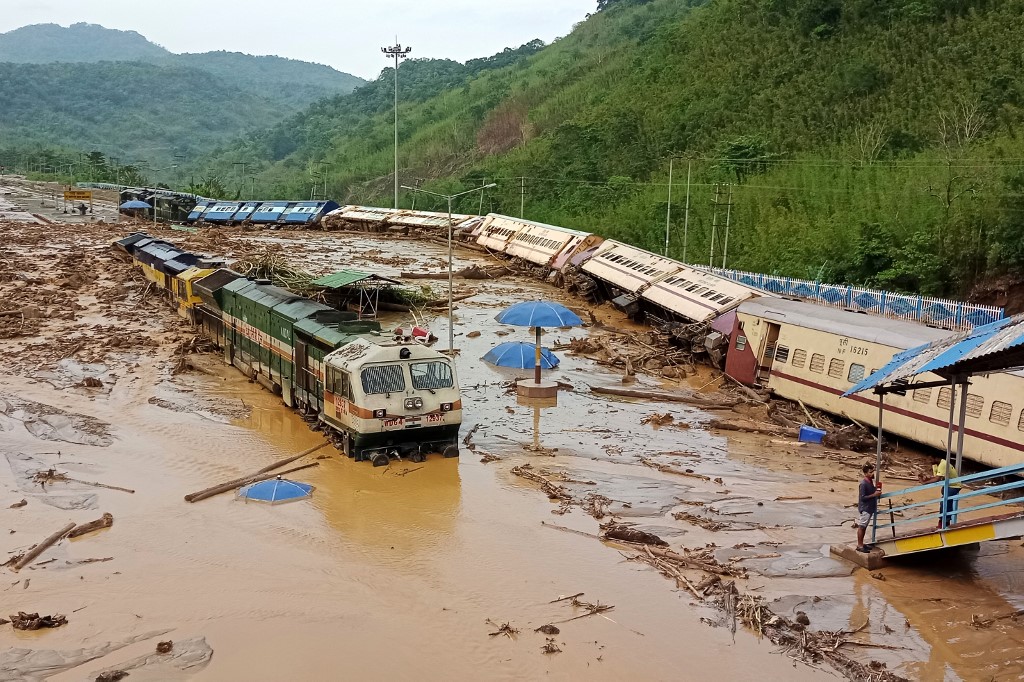 In this photograph taken on May 16, 2022, train carriages are seen toppled over following a landslide caused by a heavy rainfall at New Haflong railway station on the Lumding-Silchar route at Dima Hasao district, some 100 km from Silchar in Assam state. (Photo: AFP)

Rescuers pulled out four more bodies on Friday from the site of a landslide that buried a railway construction camp in India's northeast, taking the toll to 11, local media reported.

Security forces and disaster relief teams are still racing to rescue dozens more feared trapped under debris at the site of the incident in Manipur state.

A district official told local media that 25 people had been rescued so far.

Most victims were reserve soldiers from the Territorial Army who had been working on the railway project.

"The loss of lives, including our armed forces personnel is deeply saddening," Manipur Chief Minister N. Biren Singh wrote on Twitter, adding that more than 50 people were still missing.

A rescue team was digging through mud and removing boulders in the search for more survivors, army spokesman Sumit Kumar Sharma said.

India's remote northeast has been pummelled by heavy rainfall in recent weeks, triggering landslides and floods.

Dozens were killed in the region after flooding last month, with relentless rains triggering landslides and inundating homes.

Earlier this year, at least 10 people including a four-year-old child were killed in floods and landslides after unusually heavy rains hit several parts of India.

Experts say climate change is increasing the number of extreme weather events around the world, with damming, deforestation and development projects in India exacerbating the human toll.