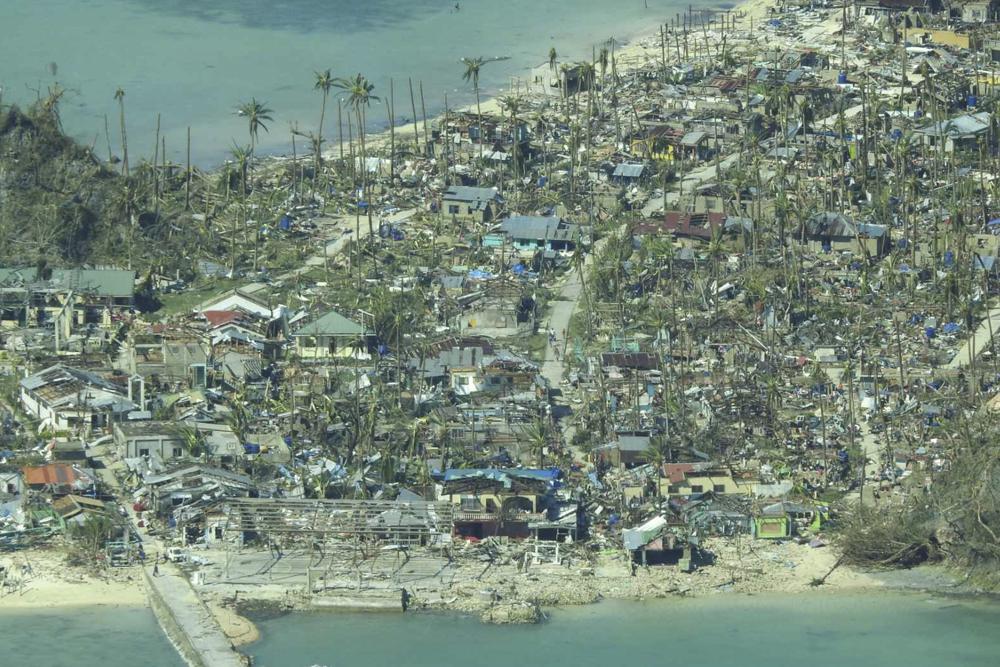 This photo provided by the Philippine Coast Guard, shows damaged houses caused by Typhoon Rai at a coastal village in Surigao del Norte province, southern Philippines on Friday, Dec. 17, 2021. A strong typhoon engulfed villages in floods that trapped residents on roofs, toppled trees and knocked out power in southern and central island provinces, where more than 300,000 villagers had fled to safety before the onslaught, officials said. (Philippine Coast Guard via AP)

At least 33 people were killed in the strongest typhoon to hit the Philippines this year, official tallies showed Saturday, with a charity reporting "alarming" destruction on islands that bore the brunt of the storm.

More than 300,000 people fled their homes and beachfront resorts as Typhoon Rai ravaged the southern and central regions of the archipelago, knocking out communications and electricity in many areas, ripping off roofs and toppling concrete power poles.

Rai was a super typhoon when it smashed into the popular tourist island of Siargao on Thursday, packing maximum sustained winds of 195 kilometres per hour (120 miles per hour).

Aerial photos shared by the military showed widespread damage in the town of General Luna, where many surfers and holidaymakers had flocked ahead of Christmas, with buildings stripped of roofs and debris littering the ground.

"Everything was flying, it was as if it was the end of the world," Raphy Repdos, a tour operator visiting the island when the storm hit, told AFP.

The neighbouring island of Dinagat had been "levelled to the ground" by the storm, Governor Arlene Bag-ao wrote on Facebook, saying houses, boats and fields were destroyed.

"Walls and roofs were torn and blown off by Odette like paper," Bag-ao said, using the local name for the typhoon.

"We have a dwindling supply of food and water. Electricity and telecommunications are down."

It emerged over the South China Sea on Saturday and was headed towards Vietnam, the state weather forecaster said.

"This is indeed one of the most powerful storms that has hit the Philippines in the month of December in the last decade," Alberto Bocanegra, head of the International Federation of Red Cross and Red Crescent Societies in the Philippines, told AFP.

The overall death toll was least 33, according to official tallies.

The latest figures come after a disaster official in the central province of Negros Occidental confirmed 13 people had died, most by drowning, and that another 50 were missing in a flood-hit area.

"We started urging people to evacuate as early as Wednesday but many were reluctant to leave," Salvador Mesa told AFP.

"There has been severe damage" on Siargao island and the northern tip of the southern island of Mindanao, Timbal said, referring to areas that took the full force of the typhoon as it slammed into the country.

There are around 100,000 residents on Siargao, but the population swells with tourists drawn to its beaches and big waves.

Shattered glass from smashed windows, sheets of corrugated iron roofing, power lines and other debris were scattered in the street.

The vice governor of Dinagat said at least six people had been killed there.

Residents on the island of around 128,000 people were "trying to repair their houses because even our evacuation centres were torn down," Nilo Demerey told ABS-CBN.

"They can't seek refuge anywhere else... everything was destroyed."

Vice President Leni Robredo was in Cebu province where she tweeted photos of motorbikes crowded around a petrol station and people lined up for drinking water.

Bocanegra warned the disruption to electricity would affect the water supply, raising concerns about hygiene and disease.

Rai hit the Philippines late in the typhoon season -- most cyclones typically develop between July and October.

Scientists have long warned that typhoons are becoming more powerful and strengthening more rapidly as the world becomes warmer because of human-driven climate change.

The Philippines -- ranked as one of the world's most vulnerable countries to the impacts of climate change -- is hit by an average of 20 storms and typhoons every year, which typically wipe out harvests, homes and infrastructure in already impoverished areas.