WORLD Death toll from quakes, tsunami in Indonesia jumps to 1,649

Death toll from quakes, tsunami in Indonesia jumps to 1,649

The death toll from Indonesia's multiple earthquakes and an ensuing tsunami jumped to 1,407 on Wednesday, the country's disaster management agency said. 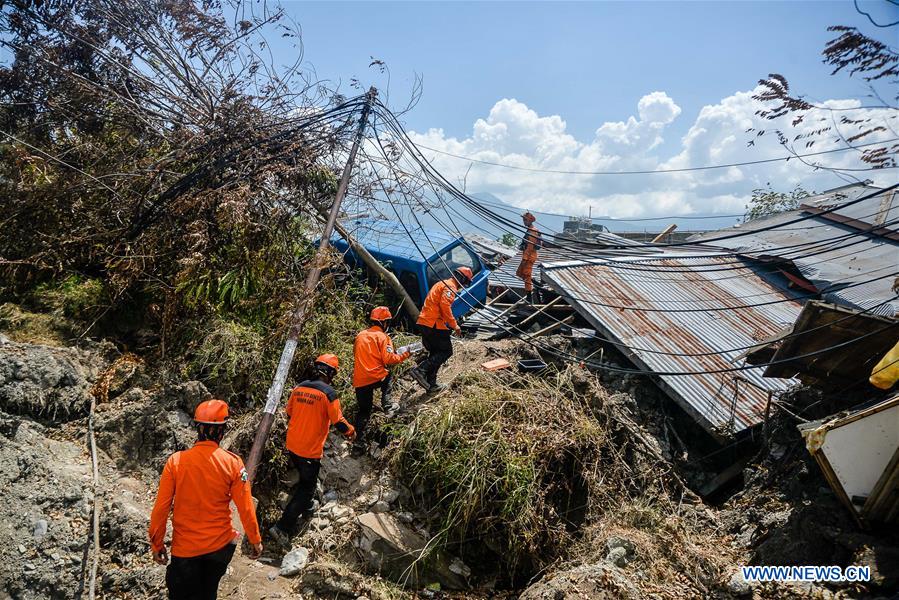 People search for victims on the debris of houses in Petobo village after earthquake and tsunami in Central Sulawesi, Indonesia, on Oct. 2, 2018. (Xinhua/Iqbal Lubis)

Most of the dead were recovered in Palu, the provincial capital.

Soldiers, police, government personnel and volunteers flocked in the catastrophe-rattled areas to join a total of 6,399 rescuers already on the spot, and are rushing to retrieve victims under the ruins, he said.

The quakes that triggered a tsunami destroyed 2,403 houses, according to a satellite image, while a total of 362 aftershocks with 12 of them felt occurred after the main shock, said Sutopo.

The natural disaster forced a total of 70,821 people to flee their homes and take shelter in camps or under tarpaulins in 141 spots. So far, not all of the basic needs has been provided, he said.

Indonesia had installed a series of tsunami warning systems across the archipelagic country, home to over 17,500 islands. But since 2012, the devices have not been functioning, and many of them were vandalized or stolen, said the spokesman.

He hinted the urgency to get the devices resume operation.

"Should the devices installed at the sea surface be vulnerable on vandalism, we can install them under the seabed. We have experts on that," he said.

"A total of 148.4 million people (in Indonesia) settle in quake vulnerable areas, and as many as 3.8 million others live in areas vulnerable on tsunami strike," said Sutopo.

So far, Indonesia only relies on five buoys installed by foreign countries for tsunami warnings.

Eastern Indonesia is vulnerable to graver risks of quakes and tsunamis as it lies on an area where three plates of Indo-Australia, Eurasia and Pacific meet, according to Sutopo.

Powerful and shallow earthquakes of 6.0, 7.4 and 6.1 magnitude and an ensuing tsunami devastated the province with the hardest-hit area in Palu, the provincial capital and Donggala district last Friday.

The tsunami with the height of 0.5 to 3 meters devastated coastal areas near Talisa beach in Palu city and Donggala district.

Regarding foreign relief aid offers, the spokesman said out of a total of 26 offers by different countries, 17 were approved by the Indonesian government as they meet the emergency relief needs.

Four international organizations also offered aids, according to him.

Among the dire needed are aircraft to transport aid materials, generators, tents and water purifiers, according to the spokesman.

Indonesian President Joko Widodo on Wednesday visited disaster-hit Palu to check the disaster-relief efforts. He said search and rescue missions are being carried out according to plans, supported by heavy duty vehicles.

"Excavators have been sent here and in Balaroa district as search of bodies has been intensified by the search teams," he said at Petobo village located in Southern Palu.

Petobo and Balaroa are two villages totally destroyed by the earthquakes and tsunami. Reports said the devastation in the two villages caused a new phenomenon of liquefaction in natural disaster term.

The grounds in the two villages seemed like "liquifying," as constructions on the ground tumbled and were sucked down into the earth.

In Balaroa village, the 6.0-magnitude earthquake moved like waves that rattled on the ground, making houses, roads and all constructions seem like being dragged to a direction after they were rooted out from their foundations.

Debris of collapsed houses and roads mixed and piled up to each other, witnesses said.

It is believed that many bodies remained buried under the debris and mangled materials in Balaroa.

According to the president, power supply in some parts of the city have been recovered.

He said as of Wednesday, power supply in Palu has reached 40 percent of its normal capacity.

Fuel supply has also gradually returned to normal as its distribution to the most-affected areas has been done properly, he said.

Widodo called on shop owners and mini markets to open their businesses so as to speed up recovery of the economy.

LOOTING AMID LACK OF AID

Rampant looting took place in disaster-hit areas in the past several days, while stores and markets were closed down.

Military and police were deployed to guard business districts to ensure security for business people to resume their economic activities.

At least 45 people were caught red-handed in the looting of stores.

The Indonesian government has previously allowed survivors to take food and other basic supplies from grocery stores to temporarily support their lives while aids were being delivered to them.

The delivery of aids faced difficulties as the main land accesses to Palu and Donggala district were clogged by stones rolling down the hills due to aftershocks.

The province's only airport serving flights to Palu was not operating normally as part of its runway was cracked by the strong earthquake, making it only capable of serving propeller planes, instead of large cargo aids deliverer planes.

The military would deploy three battalions to the two cities to ensure the security of stores and mini markets, so that people can buy food and groceries.

Supply of gasoline has also been gradually improving as the government ordered state-run oil and gas firm Pertamina to mobilize its gasoline stocks stored in provinces around Central Sulawesi to Palu.