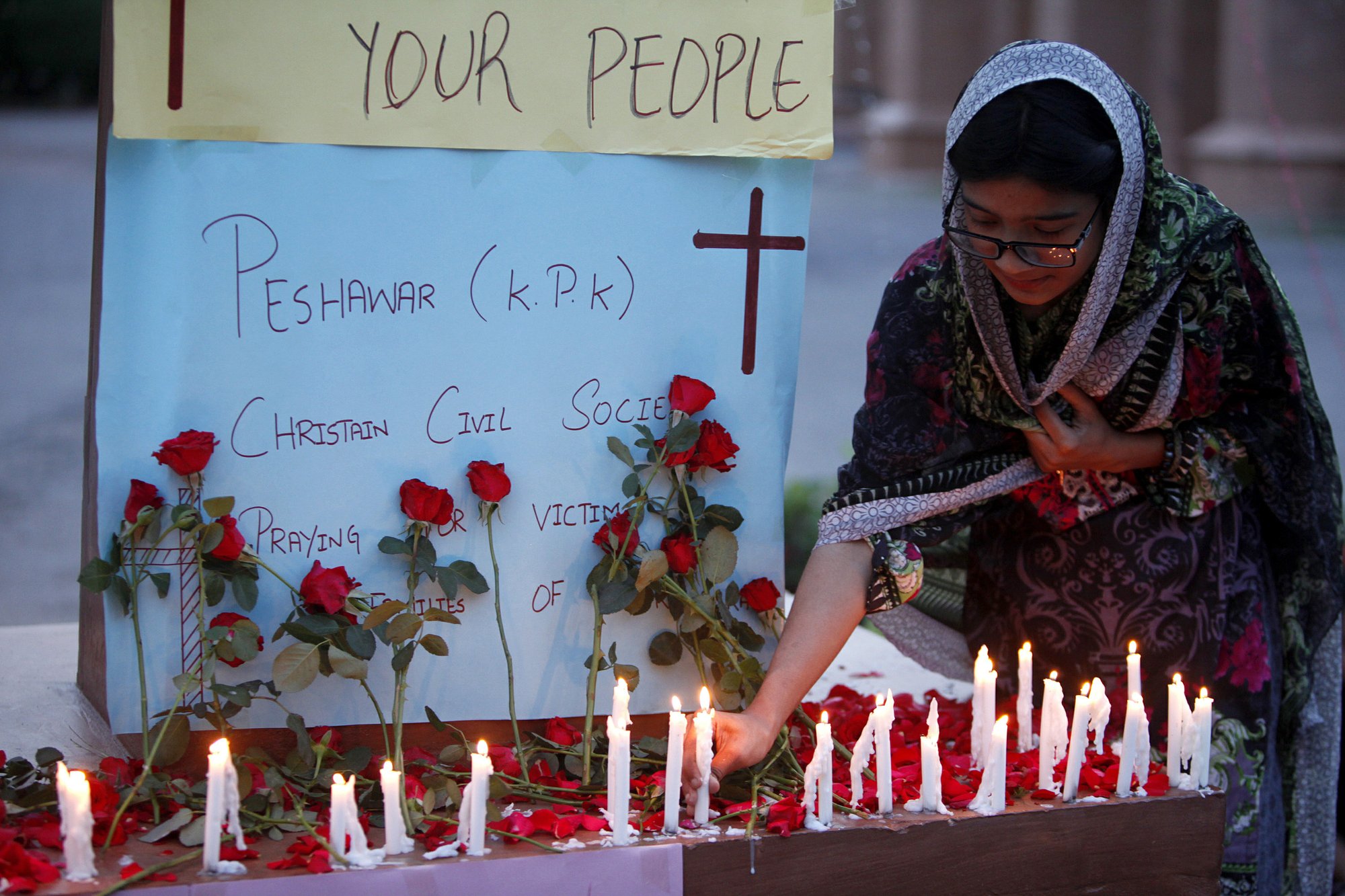 A Christian woman lights a candle at a vigil for the for the victims of bomb explosions in churches and hotels in Sri Lanka, in Peshawar, Pakistan, Sunday, April 21, 2019. (Photo: AP)

Altogether eight explosions have ripped through the country so far, with six blasts hitting in the morning and two in the afternoon. A curfew has been imposed from 6 p.m. Sunday to 6 a.m. local time on Monday.

The Sri Lankan government has also imposed a temporary ban on social media to prevent the spread of false information.

At least 13 people have been arrested over the multiple blasts, the Sri Lankan government said. They were arrested during a security forces raid on a house in the Sri Lankan capital several hours after the attacks.

Of the dead in the blasts, there are 35 foreigners, the police confirmed. Hospital sources had earlier said nine foreigners were among those killed while 13 others have been injured.

Two Chinese nationals were also confirmed dead in the explosions, the Chinese Embassy in Colombo said.

The embassy is now verifying the number of Chinese citizens injured in the attacks and it has reminded Chinese people and businesses in Sri Lanka to watch out for safety.

Earlier information from the embassy said four Chinese nationals were injured in the multiple church and hotel explosions that ripped through the island nation on the Easter day.

The Chinese Embassy has activated an emergency response mechanism immediately after the blasts, and embassy officials have visited the injured who were in hospital for treatment.

Both Sri Lankan President Maithripala Sirisena and Prime Minister Ranil Wickremesinghe have condemned the attacks and appealed for calm.

Prime Minister Ranil Wickremesinghe said the tri-forces and the police are conducting a thorough probe into the explosions.

The morning explosions occurred when hundreds of worshipers gathered at churches to commemorate Easter Sunday, the police said.

Police spokesperson SP Ruwan Gunasekara said two explosions were reported from St. Anthony's Church in Kochchikade in capital Colombo and another church in Katana on the outskirts of the capital; a third explosion was reported from a church in Batticaloa in the east.

TV Footage showed panic-stricken people standing outside a blast-stricken church. The explosion ripped off the roof and knocked out the doors and windows with broken glass strewn on the street.

The seventh explosion happened from opposite the Dehiwala Zoo in Colombo, and the eighth, which has reportedly been a suicide bombing, ripped through Colombo a short while ago, police have confirmed.

Television footage showed ambulances rushing the injured to the Colombo National Hospital, the Batticaloa Hospital in the east and the Negombo Hospital on the outskirts of the capital where the explosions took place.

Wijewardene said most of the attacks were caused by suicide bombers, but did not reveal further information.

Officials at the Bandaranaike International Airport have urged passengers to arrive four hours prior to their flight time, adding that no visitors would be allowed inside the airport.

The blasts, for which no group has claimed responsibility so far, have drawn wide condemnation from countries around the region.

Indian Prime Minister Narendra Modi tweeted, "Strongly condemn the horrific blasts in Sri Lanka. There is no place for such barbarism in our region. India stands in solidarity with the people of Sri Lanka. My thoughts are with the bereaved families and prayers with the injured."

Both Bangladeshi President Abdul Hamid and Prime Minister Sheikh Hasina condemned the attacks and expressed their condolences. Hasina wished quick recovery of those who were injured in the attacks, according to a message released by the press wing of the Prime Minister's Office.

Afghan President Mohammad Ashraf Ghani, on behalf of the Afghan people, strongly condemned the blasts and sent his deepest condolences to the victims and their families who had lost their dear ones, according to Afghan Presidential Palace.

While condemning the attacks, Pakistani Prime Minister Imran Khan said his country stands with the people of Sri Lanka during the hour of grief.

The Malaysian Foreign Ministry in a statement said, "Malaysia strongly condemns the attack and hopes that those responsible for this barbaric crime be brought to justice. Our thoughts and prayers are with the victims and families affected."

New Zealand's Prime Minister Jacinda Ardern offered her country's sympathy and support to Sri Lanka at this difficult time, saying, "New Zealand rejects all forms of extremism ... Collectively we must find the will and the answers to end such violence."

Philippine presidential spokesperson Salvador Panelo said the Philippines is "outraged by these latest senseless acts of terror and violence." "We likewise offer our deep condolences to the grieving families of those who perished as we wish the safe recovery of those injured," Panelo added.