The number of death from Typhoon Goni, which has swept across the south of the Philippines' main island of Luzon, has climbed to 16, the country's disaster management body said on Monday. 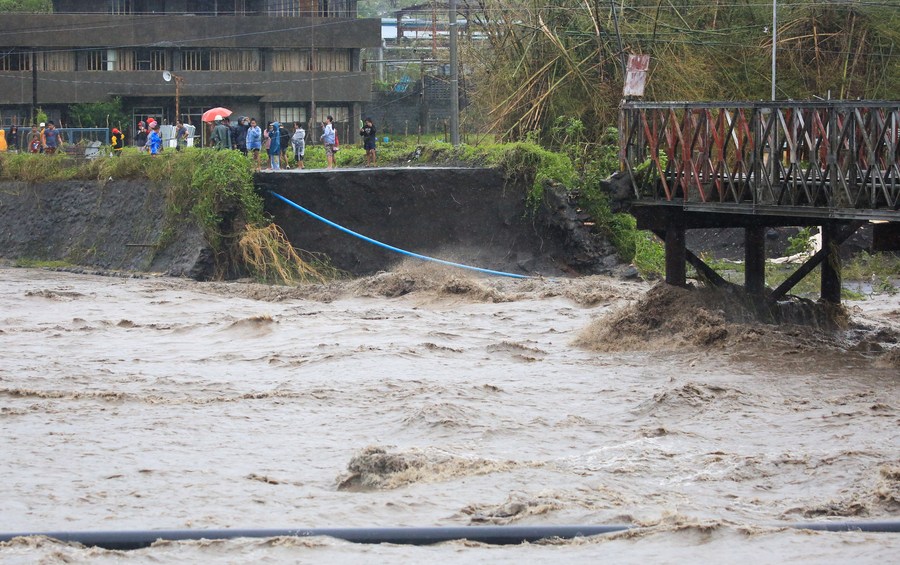 A bridge is damaged by the flood brought by the heavy rains from typhoon Goni in Albay Province, the Philippines on Nov. 1, 2020. (Photo: Xinhua)

The Office of Civil Defense (OCD) in Bicol, one of the hardest-hit southernmost regions of the main island of Luzon, said in a report that the death toll has increased to 16, while another 3 people are still missing.

It weakened as it blew out of the country.

Typhoon Goni triggered flash floods and mudslides in the Bicol region, and left a trail of destruction in 12 out of the 17 regions in the Philippines.

Ricardo Jalad, Office of Civil Defense administrator, told a press briefing that more than two million people from 12 regions have been affected by Typhoon Goni.

Typhoon Goni struck close to the regions hit by Typhoon Molave early this week, which killed 22 people and destroyed infrastructure and crops.

Typhoons and tropical storms regularly hit the Philippines from June through December, claiming hundreds of lives and cause billions of dollars in damages.

Located in the Pacific Ring of Fire, the Philippines is among the most disaster-prone countries in the world, including active volcanoes, frequent earthquakes, and an average of 20 typhoons a year, causing floods and landslides.

The Philippines lost 463 billion pesos (roughly $9.56 billion) in damages to natural disasters from 2010 to 2019, according to the Philippine Statistics Authority.