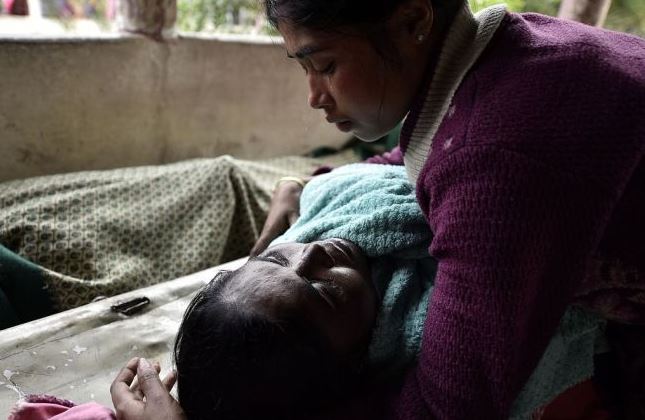 An Indian woman mourns over the dead body of her mother who died after drinking toxic bootleg liquor, at Kushal Konwar Civil Hospital in Golaghat district in the northeastern Indian state of Assam on February 23, 2019. (Photo: VCG)

The death toll due to the consumption of illicit liquor in India's northeastern state of Assam rose to 104 on Saturday, local government officials said.

Around 200 others are in different hospitals undergoing treatment.

The hooch was consumed by people on Thursday evening at the Halmira tea estate in Golaghat district, about 275 km east of Dispur, the capital city of Assam.

According to officials, so far 58 deaths have taken place in Golaghat, while 46 have died in adjacent Jorhat district.

"In Golaghat the death toll has risen to 58," Golaghat deputy commissioner Dhiren Hazarika told Xinhua over telephone. "Many others are still hospitalized".

"We received 119 cases and out of them so far 46 have died," Phunu said. "The remaining are undergoing treatment and the condition of some is stated to be critical."

The death toll is likely to increase, officials said.

Health officials say the cause of deaths, according to preliminary investigation, seems to be drinking "spurious country made liquor."

Police have registered a case and collected samples of the liquor.

"I assured the family members of all possible help from the government and promised them perpetrators will not be spared," Sarma said.

Earlier this month, around 100 people died in a hooch tragedy in northern Indian states of Uttarakhand and Uttar Pradesh. Following the deaths, authorities suspended several officials and started a crackdown on illicit liquor manufacturing units and sales points.