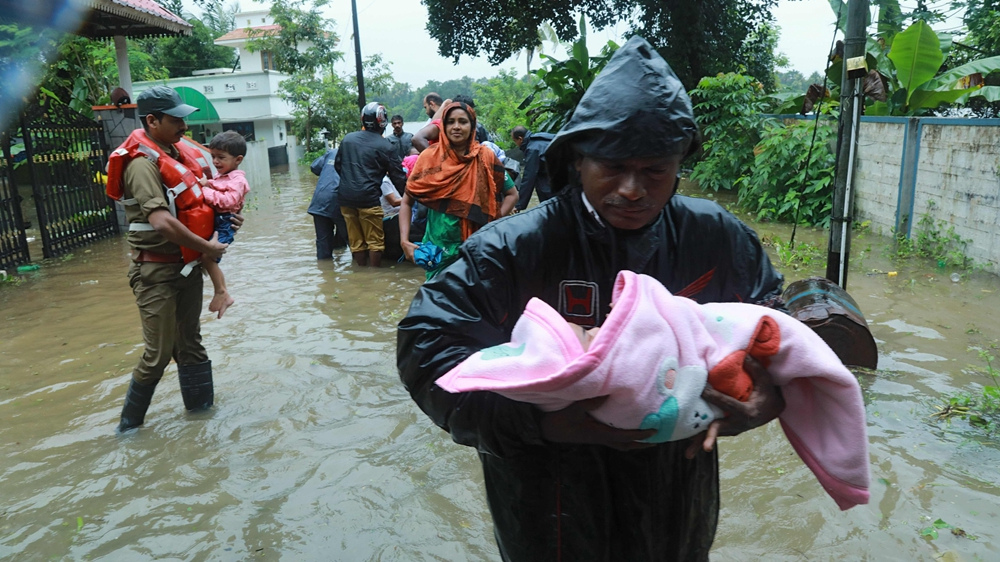 Fire and Rescue personnel evacuate local residents in an inflatable boat from a flooded area at Muppathadam near Eloor in Kochi's Ernakulam district, in the Indian state of Kerala, August 15, 2018.(Photo: VCG)

The flood toll in India's southern tourist hotspot of Kerala jumped to 67 after another 25 deaths were reported Wednesday, with more than 50,000 people seeking shelter in relief camps, according to a state official.

Kerala, famed for its pristine palm-lined beaches and tea plantations, is battered by the monsoon every year but the rains have been particularly severe this season, flooding hundreds of villages and prompting the authorities to suspend flights in and out of the region.

"Twenty five deaths were confirmed earlier in the evening. The situation is bad in many parts of the state and the number (of deaths) will likely to increase," said a senior official from the Kerala State Disaster Management Authority.

The official added that authorities had issued a "red-alert" warning in all 14 districts of the flood-ravaged state, with heavy downpours expected over the next 24 hours in many of the worst affected areas.

Kerala Chief Minister Pinarayi Vijayan's office announced on Twitter that Kochi International Airport -- the main gateway to the region -- would be closed until Saturday "due to heavy rains and resultant flooding."

The chief minister has requested the deployment of additional personnel from the Indian army, navy and other emergency forces who are already working across the state, which is home to around 33 million people.

"Our state is in the midst of an unprecedented flood havoc," Vijayan said earlier this week. "The calamity has caused immeasurable misery and devastation."

Authorities have opened the gates of 34 reservoirs as water reached dangerous levels.

Vijayan's office on Wednesday said that the authorities were also worried about rising water levels in the massive Mullaperiyar dam, and urged officials in the neighboring state of Tamil Nadu to release water from the reservoir.

Hundreds of villages have been flooded, more than 10,000 kilometers (6,000 miles) of roads and thousands of homes have been destroyed or damaged across the state, officials said.

"We have asked all airlines, domestic and foreign, to reschedule their Cochin flights either from Trivandrum or from Calicut," Suresh Prabhu, India's civil aviation minister said on Twitter.

"For international flights, this will require special dispensation which has been granted considering the emergency DGCA (Directorate General of Civil Aviation) is coordinating," he added.