Authorities have reported 13 more fatalities from a blaze in Northern California that destroyed a town, bringing the total death toll so far to 42 and making it the deadliest wildfire in recorded state history. 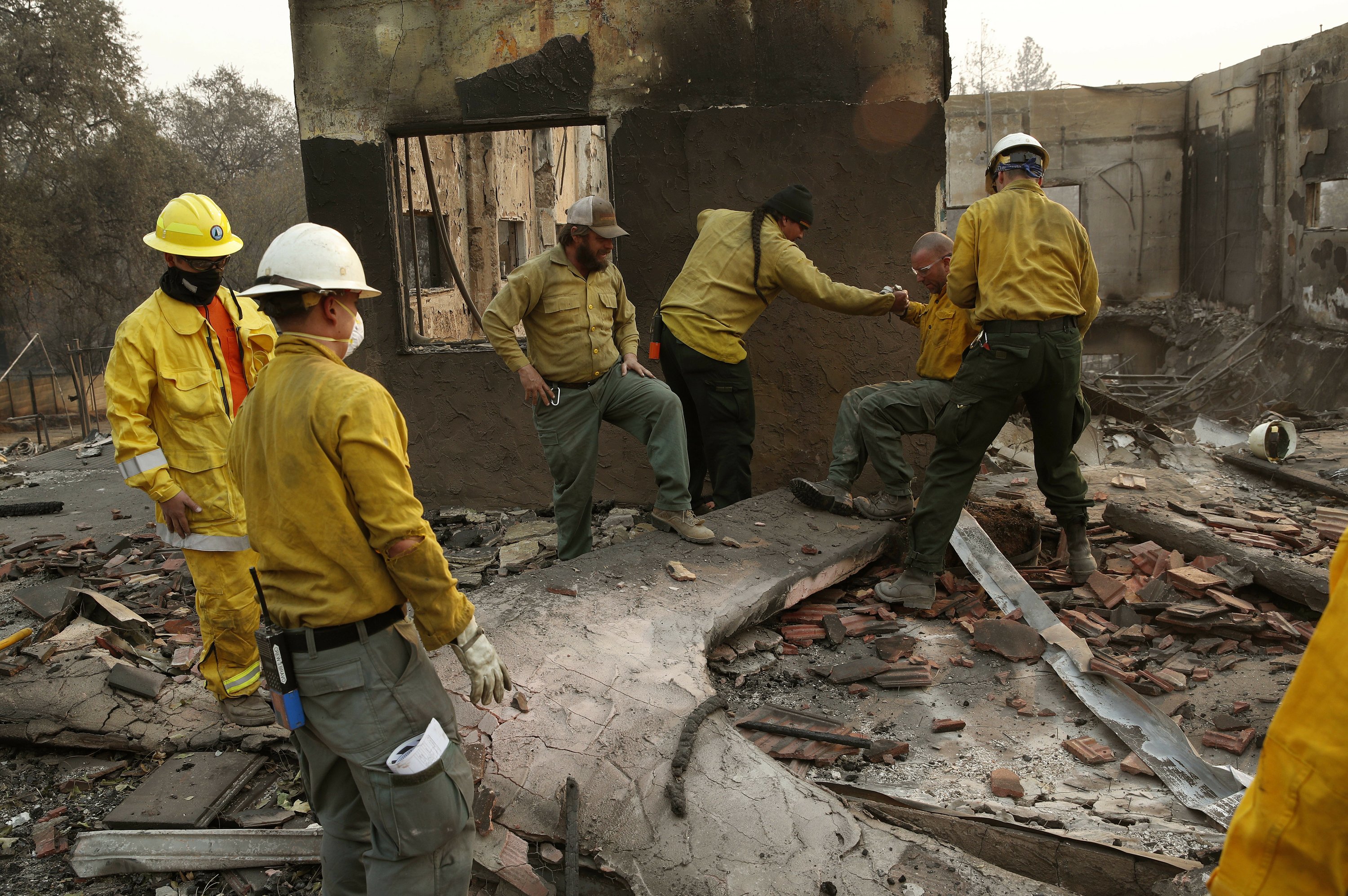 Fire crews clear rubble from the road near a building burned in the Camp Fire, Monday, Nov. 12, 2018, in Paradise, Calif. (Photos: AP)

The dead have been found in burned-out cars, in the smoldering ruins of their homes, or next to their vehicles, apparently overcome by smoke and flames before they could jump in behind the wheel and escape.

In some cases, there were only charred fragments of bone, so small that coroner’s investigators used a wire basket to sift and sort them. The search for bodies was continuing.

Hundreds of people were unaccounted for by the sheriff’s reckoning, four days after the fire swept over the town of 27,000 with flames so fierce that authorities brought in a mobile DNA lab and forensic anthropologists to help identify the dead.

The statewide death toll from wildfires over the past week has reached 44.

At least 29 people were confirmed dead in the wildfire that turned the Northern California town of Paradise and outlying areas into hell on earth, equaling the deadliest blaze in state history, and the search for bodies continued Monday.

Nearly 230 people were unaccounted for by the sheriff’s reckoning, four days after the fire swept over the town of 27,000 and practically wiped it off the map with flames so fierce that they melted metal off cars. The dead were so badly burned that authorities brought in a mobile DNA lab and consulted forensic anthropologists for help in identifying them.

Increasingly exhausted and dispirited, friends and relatives of the missing checked hospitals, police, shelters and the coroner’s office in hopes of learning what became of their loved ones.

Tad Teays, who fled Paradise ahead of the fire, waited for word of his 90-year-old dementia-stricken mother, who lived about a mile from him in town.

“By the time I evacuated and tried to get to her house, that area was already engulfed by fire,” he said. “I don’t know where she is. We’ve called shelters, been to shelters, filed a couple of missing-persons reports”

Megan James, of Newfoundland, Canada, searched via Twitter from the other side of the continent for information about her aunt and uncle, whose house in Paradise burned down and whose vehicles were still there. On Monday, she asked on Twitter for someone to take over the posts, saying she is “so emotionally and mentally exhausted.” 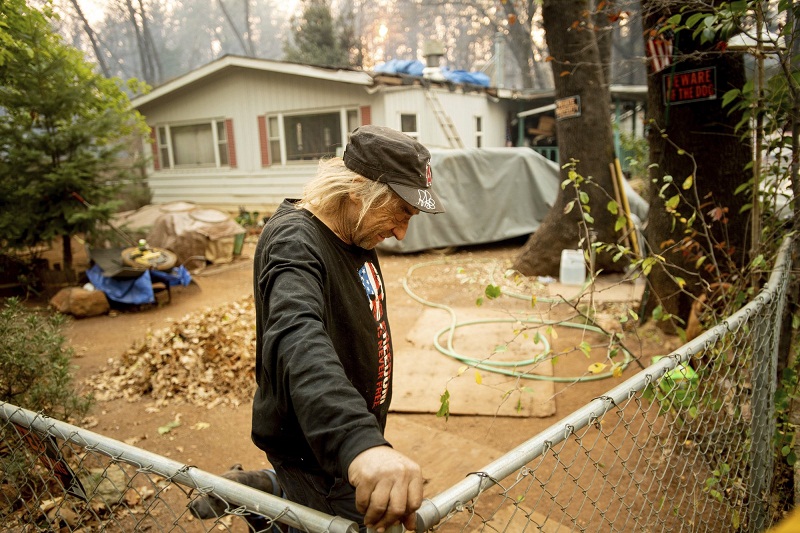 Jimmy Clements, who stayed at his home as the Camp Fire raged through Paradise, Calif., leans against his fence, Sunday, Nov. 11, 2018.

The blaze was part of an outbreak of wildfires on both ends of the state. Together, they were blamed for 31 deaths, including two in the celebrity-studded town of Malibu in Southern California, where firefighters appeared to be gaining ground against the roughly 143 square-mile (370-square-kilometer) blaze that destroyed at least 370 structures.

Some of the thousands of people forced from their homes by the blaze were allowed to return, and authorities reopened U.S. 101, a major freeway through the fire zone in Los Angeles and Ventura counties.

Malibu celebrities and mobile-home dwellers in nearby mountains were slowly learning whether their homes had been spared or reduced to ash.

All told, more 8,000 firefighters statewide were battling wildfires that scorched more than 325 square miles (840 square kilometers), with the flames feeding on dry brush and driven by winds that had a blowtorch effect.

In Northern California, firefighters still battling the blaze that obliterated Paradise contended with wind gusts up to 40 mph (64 kph) overnight, the flames jumping 300 feet across Lake Oroville. The fire had grown to 177 square miles (303 square kilometers) and was 25 percent contained, authorities said.

On Sunday, a fire engine crew searching homes in Paradise found two sets of remains in the smoking ruins of a home and placed bits of charred bone in body bags. One set may have been from a dog, not a human, but the bones were so badly burned that they would need further analysis at a forensics lab. 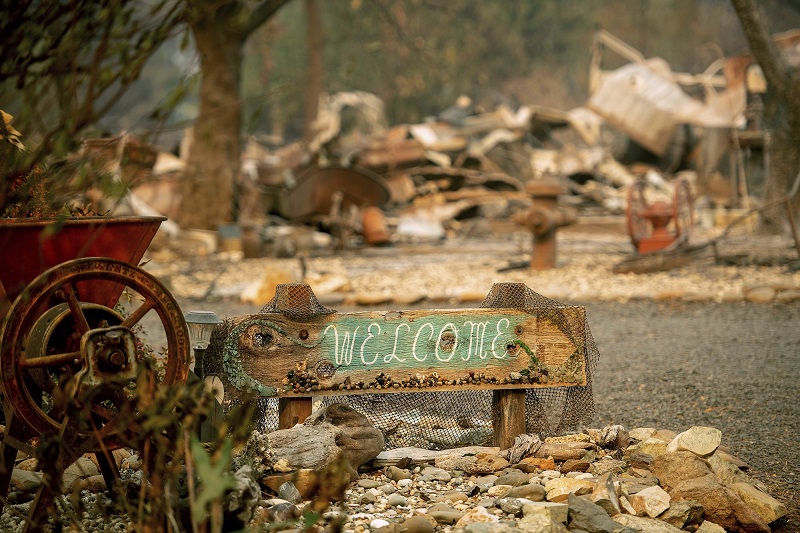 A welcome sign stands in front of a residence destroyed by the Camp Fire on Monday, Nov. 12, 2018, in Paradise, Calif.

Some of the remains consisted of fragments that most people wouldn’t even notice in the ankle-deep ashes.

There were tiny signs of some sense of order returning to Paradise on Monday and also anonymous gestures meant to rally the spirits of firefighters who have worked in an ash-covered wasteland for days.

Large American flags stuck into the ground lined both sides of the road at the town limits, and temporary stop signs appeared overnight at major intersections. Downed power lines that had blocked roads were cut away, and crews took down burned trees with chain saws.