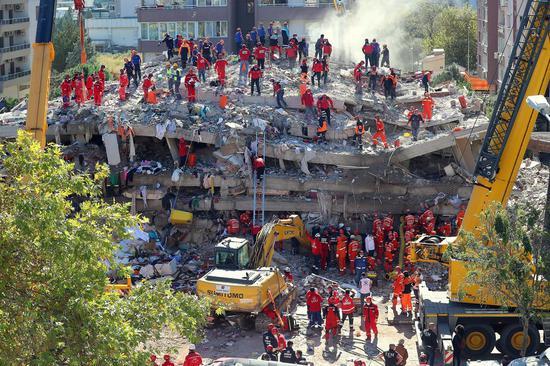 Rescuers work at a site of a collapsed building after an earthquake in Izmir province, Turkey, on Oct. 31, 2020. (Photo: Xinhua)

The death toll in the earthquake that struck Turkey's western province Izmir climbed to 62, the Disaster and Emergency Management Authority of Turkey (AFAD) said on Sunday.

In a written statement, the AFAD noted that a total of 940 people were wounded at the 6.6-magnitude earthquake that hit the Aegean Sea off the Seferihisar district on Friday.

It said 218 citizens are still under treatment in hospitals.

Search and rescue operations are still ongoing in the debris of eight collapsed buildings across the province, according to Health Minister Fahrettin Koca.

According to Izmir Mayor Tunc Soyer, the number of damaged buildings was 400 across the province.

The Izmir municipality has established several tent centers across the province, continuously distributing food and other supplies for people in need.

The mayor said some laundry centers were also set up to meet the hygiene needs of those living in tents.