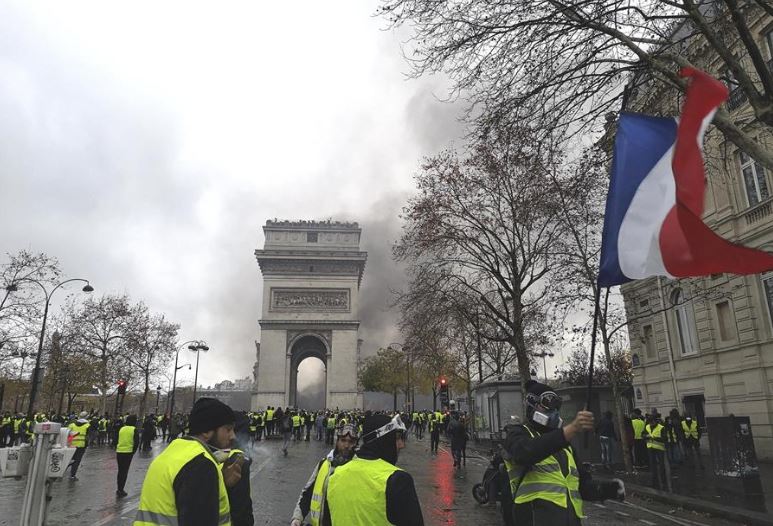 PARIS, Dec. 22 (Xinhua) -- A motorist was killed late on Friday in a road accident linked to "Yellow Vest" movement in southern France, bringing the death toll to 10 since protesters launched demonstrations in mid-November against fuel tax rise, local media reported on Saturday.

The latest victim, a 36-year-old man, was hit by a truck stopped near a motorway where demonstrators had been gathering and blocking the passage, the BFMTV news channel reported.

Nine others have died in incidents linked to the movement, mostly from traffic accidents caused by roadblocks, since the movement started on Nov. 17.

The "Yellow Vest" movement, a nation-wide protest against weak economic performance and stagnant income increase under President Emmanuel Macron, started as a campaign against surge in fuel prices this year.

In order to end the social uprising and gain back people's support, Macron has announced a package of measures, including boosting the minimum wage and easing tax increases on pensioners.

He has also promised to organize a broad nationwide debate about taxation in the coming three months.

Despite the president's concessions, "Yellow Vest" leaders have planned new demonstrations in a sixth weekend. They encouraged their supporters to block vehicles at the borders on Saturday.

Eric Douet, one of the movement's representatives, called on Facebook to stage "Act VI: in Versailles" west of Paris. More than 1,000 people said to take part.

The Versailles chateau and gardens, one of France's most brilliant historical sites, is closed on Saturday on risks of violent protest.

"We are ready in case the protest focuses on Versailles, but it could also be elsewhere," Interior Minister Christophe Castaner was quoted as saying by the local media.

Despite determination of some to continue the protests, the movement appeared to lose momentum with the total number of participants halving to 66,000 last Saturday from a week ago. The figure stood at nearly 300,000 on Nov. 17.

"We expect a decrease in mobilization but which can include the most determined individuals," said Deputy Interior Minister Laurent Nunez.