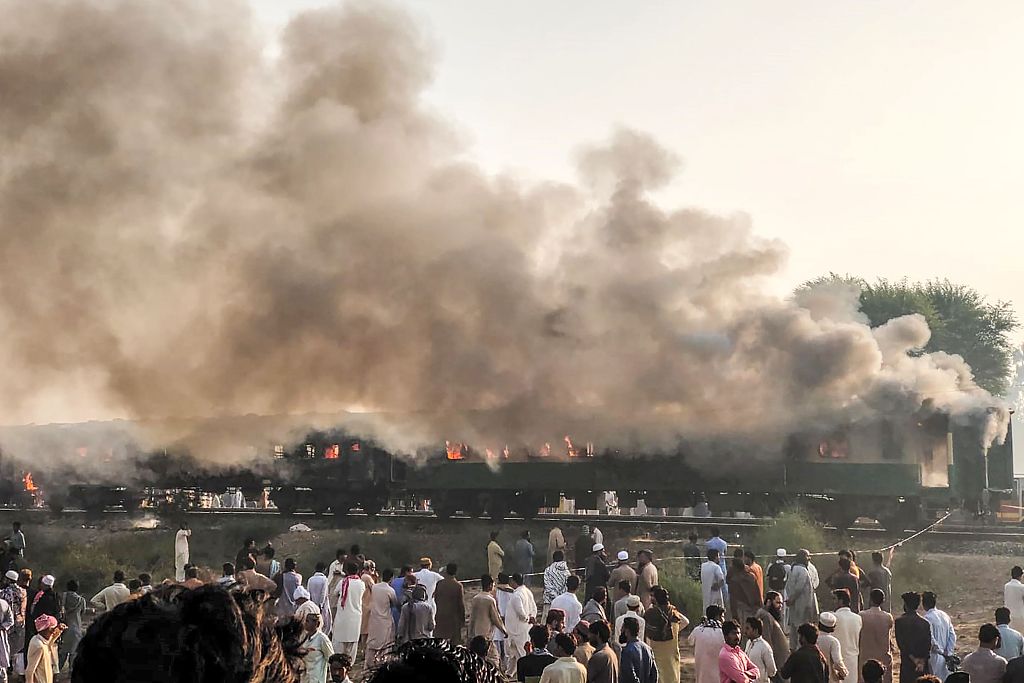 ISLAMABAD, Oct. 31 (Xinhua) -- The death toll from a train fire in Pakistan's east Punjab province has risen to 74, and investigation into the matter is going on to determine the individual or factors responsible for the horrific incident, Railways Minister Sheikh Rasheed Ahmad said on Thursday.

He confirmed at a media briefing that the incident happened due to explosions of two gas cylinders and a stove inside the running train, on which passengers were preparing their breakfast.

"One of the train guards stopped the passengers when he noticed them cooking inside the compartment, but when he left, they started their activity again during which one of the defected cylinders exploded."

Initially one of the compartments caught fire, but it later engulfed two other bogies because the thrust of wind at the moving train, he said, adding that the magnitude of the losses might have multiplied if the driver did not stop the train in the soonest possible manner.

The incident happened in Rahim Yar Khan district of Pakistan's east Punjab province when the train Tezgam Express was on its way to the province's Rawalpindi city from southern port city of Karachi.

District Coordination Officer of Pakistan Railways Multan Nabila Aslam told Xinhua that 37 people were being treated in three hospitals in Rahim Yar Khan and neighboring Multan and Bahawalpur districts, where a state of emergency had been declared by local authorities.

She said that gas cylinders were not allowed on the train, but the passengers carrying them went unnoticed by the security staff as they got onboard from Hyderabad station where they did not have efficient scanners and the passengers hid the cylinders inside the bags.

The blaze engulfed the second, third and fourth last compartments of the train, which were removed after extinguishing of the fire, and the train with the remaining bogies was dispatched to its destination.

During rescue works, three trains were also stopped at various stations due to closure of the track, but after the completion of operation, the track was opened for routine railway traffic, she said.

Two economy class and one business class carriages of the train were affected in the fire and there were about 76 people in each of the compartment, some of whom saved their lives by jumping off the train, and some others rushed to the adjoining compartments to rescue themselves.

Talking about identification of the bodies, Aslam said that some of them were beyond recognition and will be handed over to relatives after being identified by DNA test.

Army troops including doctors and paramedics had arrived at the incident site for rescue and relief operation, and an army aviation helicopter also took part in evacuating the critically injured people, the military's media wing Inter-Services Public Relations said in a statement.