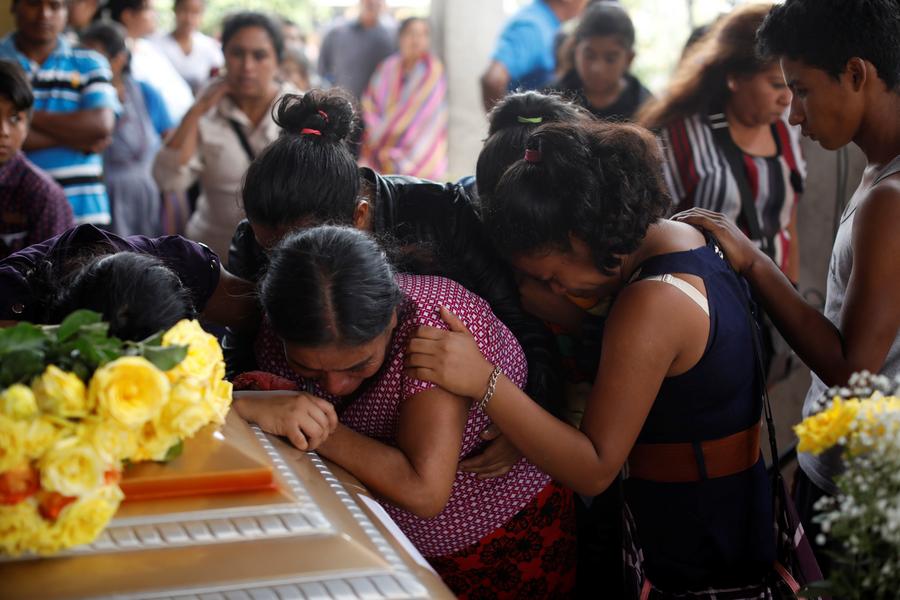 People mourn of their loved one, who died during the eruption of the Fuego volcano, during a wake at a plaza in Alotenango, Guatemala June 4, 2018. [Photo/Agencies]

GUATEMALA CITY - The death toll from the eruption of a highly active volcano near Guatemala's capital rose to 109, said the country's disaster and forensic agency Inacif earlier on Thursday.

The National Forensic Sciences Agency said morgues had received the remains of 109 victims of Sunday's eruption.

The agency said seven of the latest victims were put in a temporary morgue placed near the impact zone, in the now-devastated community of San Miguel Los Lotes in Escuintla, south of the capital.

Guatemalan officials warned the public of falling ash from the Fuego volcano late on Thursday.

The eruptions have showered volcanic ash over a large area and spewed deadly, fast-moving pyroclastic flows through nearby towns.

The national seismological institute Insivumeh said the civil aviation authority should take precautions with flights amid volcanic activities at the peak of Fuego.

The Fuego volcano, located about 50 km west of the capital, exploded around noon local time and lava began flowing down in the afternoon on Sunday.

According to a preliminary report from the National Coordination for Disaster Reduction of Guatemala, the eruption is "the strongest one recorded in recent years."