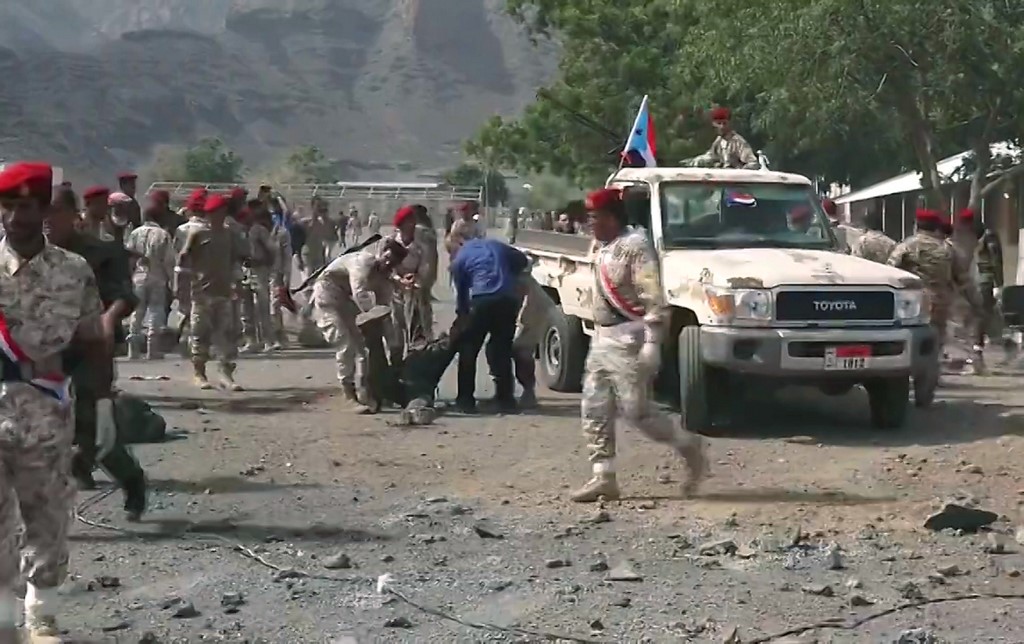 This AFPTV screen grab from a video made on August 1, 2019, shows Yemeni security forces carrying a body at the scene of a missile attack on a military camp west of Yemen's government-held second city Aden.(Photo: AFP)

The huge blast caused by a Houthi-fired ballistic missile against the military base of the newly-recruited Yemeni army force in Buraiqa district, in Aden's western part, left around 38 soldiers killed and scores of others injured at the scene, a military official said on condition of anonymity.

Scores of soldiers were injured as a result of the ballistic missile that targeted a graduation ceremony for a new batch of newly-recruited soldiers at the Jalaa army base in Buraiqa, said the source.

The ballistic missile attack occurred while several military leaders and government officials were attending a military parade organized at the base of the newly-recruited Yemeni army forces backed by the United Arab Emirates (UAE) in Aden.

Brigadier Munir Abu Yamamah, leader of the 1st Armored Brigade, was killed when he was present during the same military parade held to celebrate the graduation of a new batch of the UAE-backed Yemeni troops in Aden, a government official told Xinhua.

Medical sources at Buraiga hospital confirmed to Xinhua that "the blast left 38 killed soldiers including senior officers and scores others injured, 45 of whom had been admitted to the public hospital located in Buraiga."

He pointed out that "many others of wounded soldiers were admitted to receive emergency surgical operations in other hospitals amid critical health conditions."

"An explosion rocked the ground and caused a state of panic and confusion among hundreds of soldiers who were preparing themselves to start a military parade inside the base," said a soldier named as Ali Faqeeh.

"Many soldiers died immediately on the parade square that was filled with the dead body remains and blood after the deadly attack," said Faqeeh.

A Xinhua reporter near the scene confirmed that several ambulances were noticed transferring the killed and injured soldiers into different hospitals located in Aden.

The targeted military base was preparing to dispatch new batches of well-trained army soldiers to join the pro-government forces fighting the Houthis in the southern province of Dhalea, according to local government sources

The Houthi-affiliated Masirah television network claimed responsibility for launching a ballistic missile against the pro-government military base in Aden's district of Buraiga, in the city's western part.

"The attack was aimed at a military parade of the invaders and the mercenaries, and it precisely targeted the base," said the Masirah television network in a statement released minutes after the attack.

The ballistic missile attack coincided with a car bomb attack that targeted a police station in the Sheik Othman neighborhood, in the center of Aden, leaving four soldiers killed and 20 others injured earlier in the day.

No group immediately claimed responsibility for the car bomb attack, but the security sources blamed it on extremist groups.

Yemeni government officials, including high-ranking security commanders and intelligence officers, have been the prime targets for the Iranian-backed Houthi rebels group and the Yemen-based al-Qaida branch during the past months.

In January, key military leaders loyal to the internationally-backed Yemeni government were killed and many soldiers injured in a strike launched by a Houthi drone against a military parade in Lahj in southern Yemen.

Considered Yemen's temporary capital, Aden is where the Saudi-backed Yemeni government has based itself since 2015.

The impoverished Arab country has been locked into a civil war since late 2014, when Shiite Houthi rebels overran much of the country and seized all northern provinces, including the capital Sanaa.