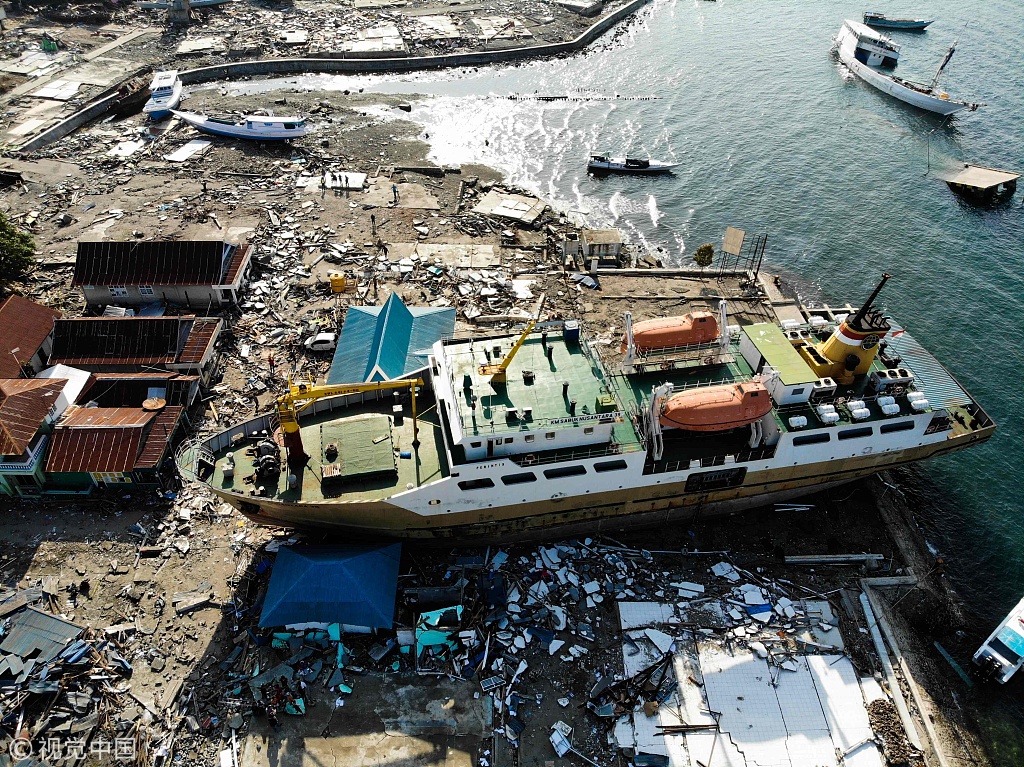 This aerial photograph taken on October 3, 2018 shows a passenger ferry that was washed ashore into buildings in Wani, Indonesia's Central Sulawesi, after an earthquake and tsunami hit the area on September 28. (Photo: VCG)

Most of the dead were recovered in Palu, the provincial capital of Central Sulawesi province.

The search and rescue operations were underway with more rescuers and equipment joining in the mission, spokesman of the national disaster management agency Sutopo Purwo Nugroho said.

Soldiers, police, government personnel and volunteers flocked in the catastrophe-rattled areas to join a total of 6,399 rescuers already in the scene, and were rushing to retrieve victims under the ruins, he said.

The quakes that triggered a tsunami destroyed 2,403 houses, according to a satellite image, while a total of 362 aftershocks with 12 of them felt occurred after the main shock, said Sutopo.

The natural disaster forced a total of 70,821 people to flee their homes and take shelter in camps or under tarpaulins in 141 spots. So far, not all of the basic needs has been provided, he said.

Indonesia had installed a series of tsunami warning systems across the archipelagic country, home to over 17,500 islands. But since 2012, the devices have not been functioning, and many of them were vandalized or stolen, said the spokesman.

He hinted the urgency to get the devices resume operation.

"Should the devices installed at the sea surface be vulnerable on vandalism, we can install them under seabed. We have experts on that," he said.

"A total of 148.4 million people (in Indonesia) settle in quake vulnerable areas, and as many as 3.8 million others live in areas vulnerable on tsunami strike," said Sutopo.

Powerful and shallow earthquakes of 6.0, 7.4 and 6.1 magnitude and a tsunami devastated the province with the hardest-hit area in Palu and adjoining Donggala district last Friday.

The tsunami with the height of 0.5 to 3 meters ravaged coastal areas near Talisa beach in Palu and Donggala district.