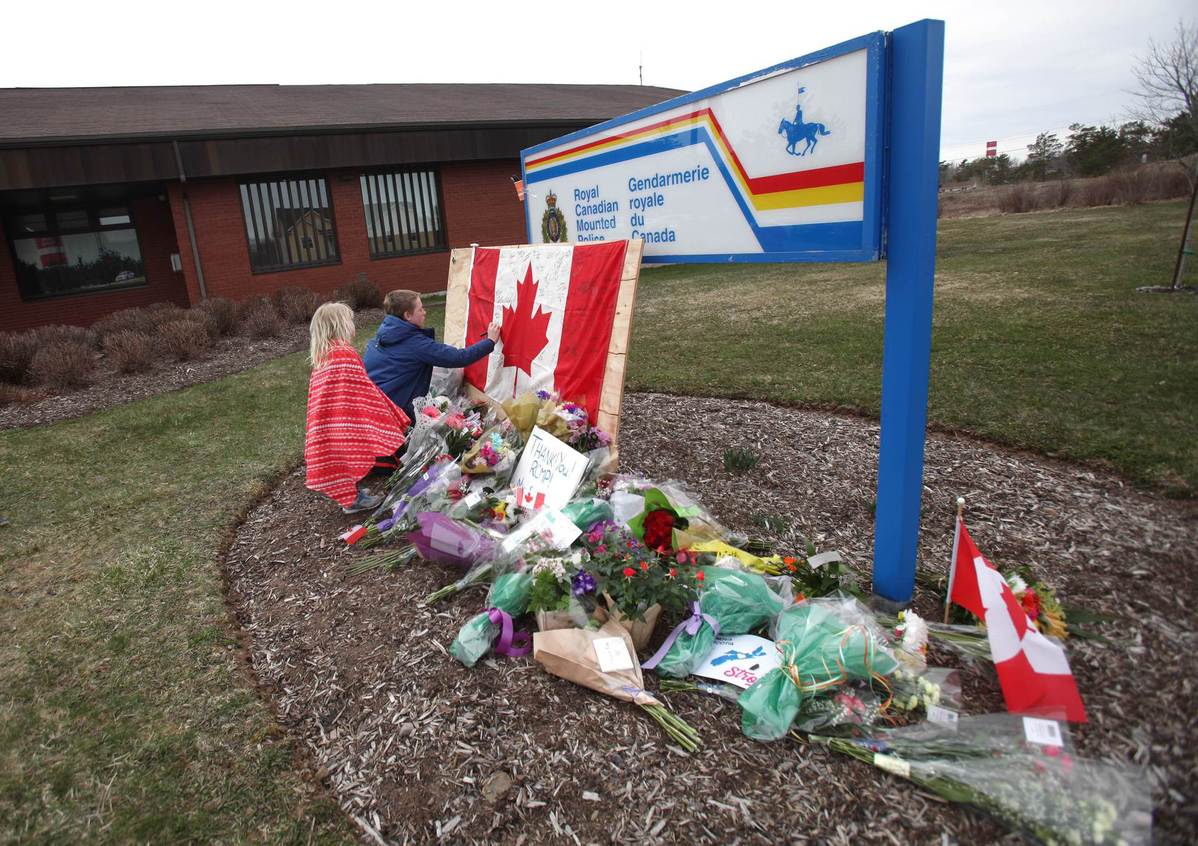 Children sign a Canadian flag at an impromptu memorial in front of the RCMP detachment in Enfield, Nova Scotia, Canada on April 20, 2020. (Photo: Agencies)

At least 22 victims were confirmed dead from the shooting rampage last weekend in Portapique, Nova Scotia, in what is now one of the deadliest such attacks in Canadian history.

According to an update Tuesday afternoon, the Royal Canadian Mounted Police (RCMP) said they are in the midst of a "detailed and complex" investigation at 16 different crime scenes, including five structures where bodies were found.

"The investigative team is focused on learning more about this very tragic situation, including accurate victim information and whether others may have aided the suspect," police said.

The suspect was identified as denturist Gabriel Wortman, 51, who was wearing an RCMP uniform and driving a replica RCMP vehicle during part of his rampage.

Nova Scotia RCMP Chief Superintendent Chris Leather said the car and uniform were part of the reason the shooter was able to travel so far and for so long without being captured.

The violence began at 10:30 pm Saturday when a firearms call came in and ended around noon Sunday when police shot and killed the suspect at a gas station in Enfield.

The RCMP searched for Wortman for 12 hours as he drove more than 150 kilometers (90 miles) along rural roads and highways while killing at least 22 victims.

"This is one of the most senseless acts of violence in our province's history," said Nova Scotia Premier Stephen McNeil.

The known victims included a female 23-year veteran of the RCMP, an elementary school teacher, two healthcare workers, a retired firefighter and a 17-year-old girl.

Among them, Kristen Beaton, a continuing-care assistant who advocated for more personal protective equipment for frontline healthcare workers battling COVID-19, was pregnant when she was killed on the side of the road. Her husband told CTV News that they planned to tell their family about the pregnancy sometime this week.

The police said that some of the victims were known and targeted by the shooter while he did not know others.

RCMP sources said they are not speculating on the suspect's motives and would not say whether the event was planned.

The RCMP said it could take months to unravel the mass shooting as they continue to probe crime scenes across the province.

Nova Scotians started looking for ways to help out. However, the grief and pain felt across the region make memorials for the shooting victims more difficult due to social distancing requirements prompted by the coronavirus pandemic.

Dr Robert Strang, the province's chief medical officer of health, said public mourning gatherings cannot happen now because they could contribute to the further spread of the coronavirus, which has killed 10 people in the province.

An online vigil will give Canadians a chance to come together virtually to pay tribute to the victims. The three-hour vigil called "Nova Scotia Remembers" is scheduled to be livestreamed on Facebook and YouTube on Friday starting at 7 pm local time (6 pm EDT).

Meanwhile, the provincial government called for honoring the victims by hanging the provincial tartan or blue scarves and ribbons from trees, windows and balconies.