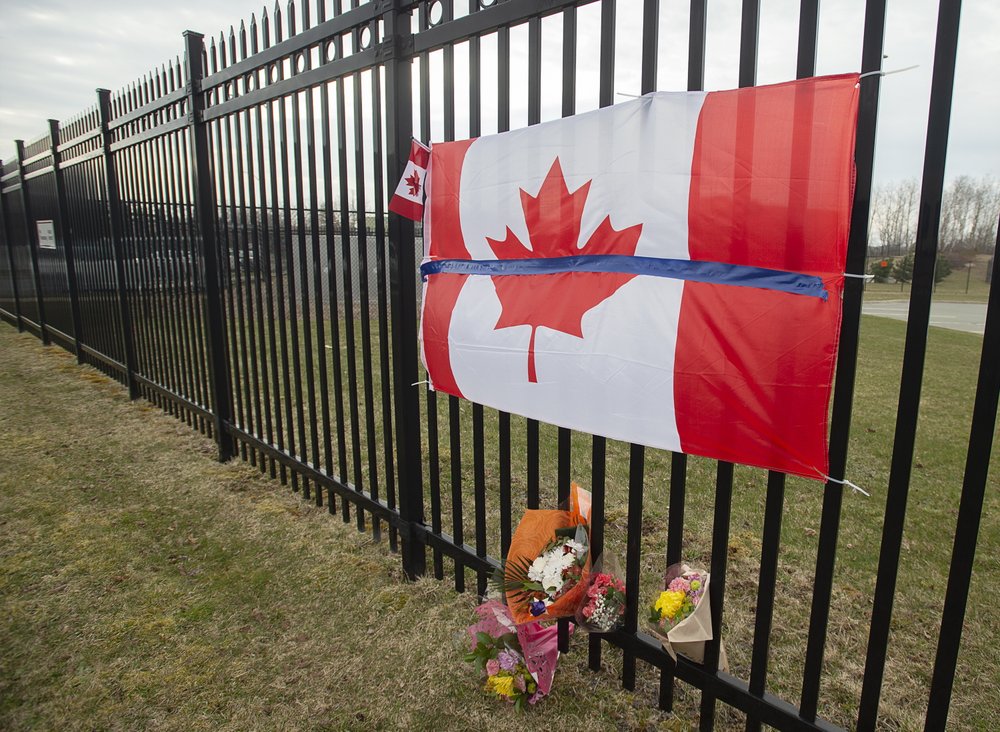 A tribute is displayed Monday, April 20, 2020, at the Royal Canadian Mounted Police headquarters in Dartmouth, Nova Scotia, following a weekend shooting rampage by a gunman, disguised as a police officer, that killed multiple people including an RCMP constable. (Photo: AP)

OTTAWA, April 20 (Xinhua) -- The death toll has risen to 18 in the wake of mass shooting in the Canadian province Nova Scotia, the worst of its kind in the country's history, according the Royal Canadian Mounted Police (RCMP) Monday afternoon.

The gunman was also killed, bringing the total deaths to 19. Police have identified him as Gabriel Wortman, a 51-year-old denturist in the province.

Among the dead is a policewoman named Heidi Stevenson, a 23-year veteran of the force, and mother of two. A policeman injured in the attack is now recovering at home from gunshot wounds.

Last night, RCMP said that at least 16 people were killed in the shooting.

However, Leather said that police could find more victims as they are still conducting searches at 16 crime scenes around the northern portion of Nova Scotia.

Leather said there were five structure fires and so far they have been unable to fully examine these crime scenes, as most of them are residences and there may be victims still in those homes which have been burned to the ground.

During the bloody 12-hour killing rampage, Leather said the gunman's ability to move around the province undetected was greatly benefited by the fact he had a car resembling an RCMP vehicle.

Canadian Prime Minister Justin Trudeau expressed his condolences to the loved ones of the victims on Monday afternoon.

"Such a tragedy should never have occurred," Trudeau said. "We stand with you, and we grieve with you, and you can count on our government's full support during this incredibly painful time."