NEW DELHI, May 24 (Xinhua) -- The death toll in a major fire incident in India's western state of Gujarat has risen to 18, and five injured have been admitted to a hospital, a senior Fire Department official confirmed to Xinhua over phone on Friday. 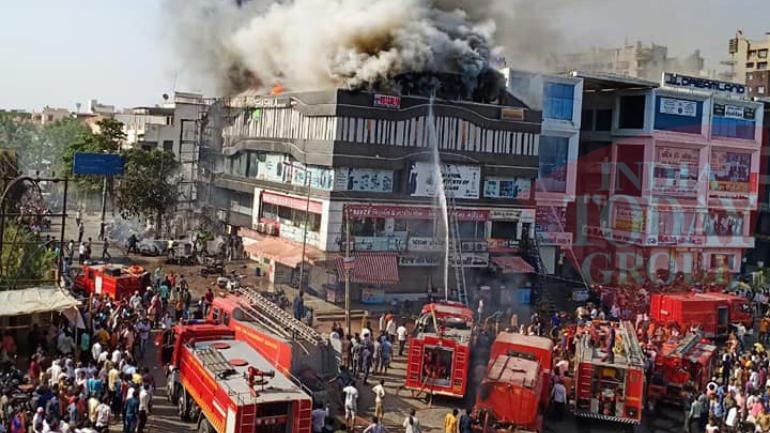 The fire broken out inside a four-storey building in Gujarat's Surat town on Friday afternoon.

The ill-fated building -- "Takshila Commercial Complex" -- had a coaching center where as many as 50 young students were taking academic classes after their regular school hours. The center was on the fourth floor.

TV visuals showed a few students jumping from the fourth floor of the building engulfed in fire and smoke.

"We have recovered 18 dead bodies from the site of the incident and sent them for post-mortem. Right now I am not in a position to tell how many of them were students and how many adults. Five injured persons have been admitted into a local hospital," said the local Chief Fire Officer Basant Pareek while speaking to Xinhua.

Prime Minister Narendra Modi expressed anguish at the incident and directed the state government to provide assistance to the victims. "Extremely anguished by the fire tragedy in Surat. My thoughts are with bereaved families. May the injured recover quickly. Have asked the Gujarat Government and local authorities to provide all possible assistance to those affected," tweeted Modi.

Meanwhile, state's Chief Minister Vijay Rupani has announced a financial assistance of 400,000 Indian Rupees to each of the families of the dead.

The fire has been doused and investigation has been initiated to find out the cause of the fire, said the local administration officials.